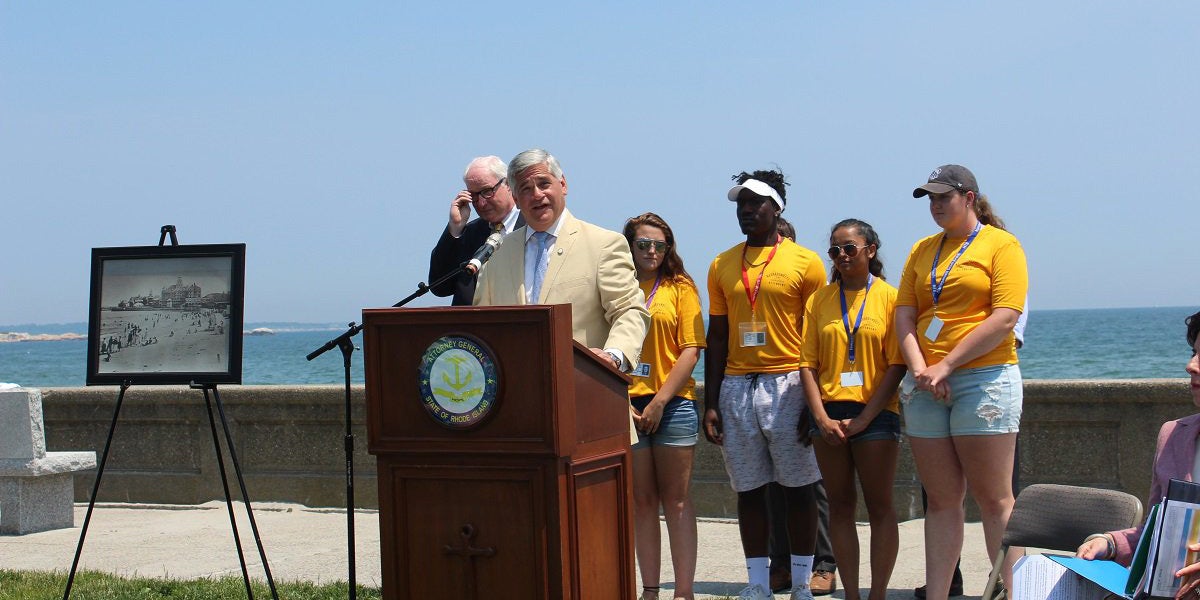 In what advocates are calling a “watershed moment” for climate litigation, Rhode Island’s Democratic Attorney General Peter F. Kilmartin announced on Monday that the state has filed a lawsuit against 21 major oil companies—including BP, Chevron, ExxonMobil and Shell—”for knowingly contributing to climate change, and causing catastrophic consequences to Rhode Island, our economy, our communities, our residents, our ecosystems.”

“This lawsuit marks the first in the country filed on behalf of a state and its citizens against Big Oil,” Kilmartin declared. “For a very long time there has been this perception that they, Big Oil, were too big to take on, but here we are—the smallest state, the Ocean State—taking on the biggest, most powerful corporate polluters in the world, because it’s the right thing to do. They need to be held accountable.”

The suit is supported by Rhode Island Gov. Gina Raimondo, Reps. Jim Langevin and David Cicilline and Sen. Sheldon Whitehouse—all Democrats. Whitehouse, a congressional leader on climate action, commended Kilmartin for “holding some of the world’s most powerful corporations responsible for the damage they’re inflicting on our coastal economy, infrastructure, and way of life.”

Bill McKibben, cofounder of 350.org, called it a “major” development:

“When state attorneys general start filing suit it’s a game changer, as it was with tobacco and currently is in opioid litigation. In the same way, Rhode Island’s lawsuit is a watershed moment for climate liability,” Wiles added. “Kilmartin recognized that if polluters don’t pay, then taxpayers will, and that is completely unacceptable.”

As the complaint filed in the Rhode Island Superior Court, outlines:

Defendants, major corporate members of the fossil fuel industry, have known for nearly half a century that unrestricted production and use of their fossil fuel products create greenhouse gas pollution that warms the planet and changes our climate. They have known for decades that those impacts could be catastrophic and that only a narrow window existed to take action before the consequences would be irreversible. They have nevertheless engaged in a coordinated, multi-front effort to conceal and deny their own knowledge of those threats, discredit the growing body of publicly available scientific evidence, and persistently create doubt in the minds of customers, consumers, regulators, the media, journalists, teachers, and the public about the reality and consequences of the impacts of their fossil fuel pollution.

Speaking at the iconic Narragansett Sea Wall, Kilmartin explained the specific allegations against these oil companies, including that they “created, contributed to, and assisted in creating the conditions in Rhode Island that constitute a public nuisance,” and “violated the state’s Environmental Rights Act by polluting, impairing, and destroying natural resources of the state.”

“Rhode Island seeks to ensure that the parties who have profited from externalizing the responsibility for sea level rise, drought, extreme precipitation events, heatwaves, other results of the changing hydrologic and meteorological regime caused by global warming, and associated consequences of those physical and environmental changes, bear the costs of those impacts on Rhode Island,” the complaint concludes, “rather than the state, the local taxpayers, residents, or broader segments of the public.”

“Taxpayers should not be expected to shoulder the steep financial burden of rebuilding after super storms like Harvey and Irma, or the yet to be named storms that will only increase in frequency if climate change continues unabated,” asserted Greenpeace climate campaigner Naomi Ages, praising Kilmartin for his leadership. “Despite having clear evidence that its products were harming the planet, the fossil fuel industry failed to warn consumers and regulators about the dangers. For this, it must pay.”