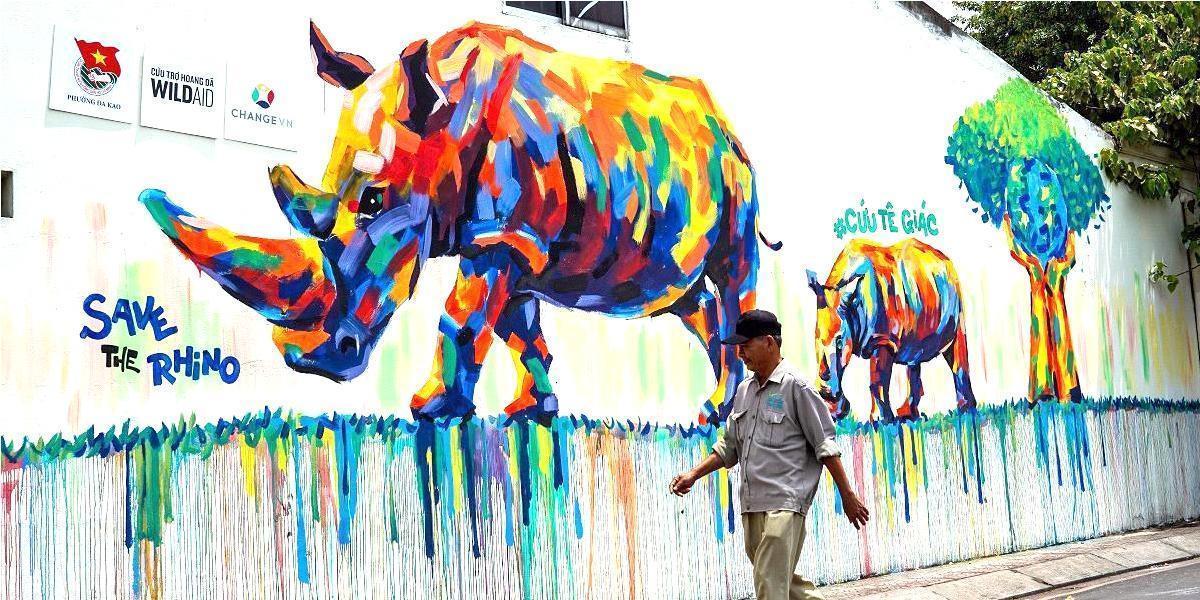 Throughout the month of March, a unique graffiti campaign popped up on the walls of several streets in downtown Ho Chi Minh City, the hyperactive commercial capital of Vietnam. The works differed from the usual tags and designs that adorn urban areas around the world. The graffiti pieces, 17 in all, carry a simple message: “Save the rhinos” or “Cứu tê giác” in Vietnamese.

Vietnam is home to one of the largest African rhino horn consumer bases in the world, in addition to being a key transit point for shipments to China. Users of rhino horn believe it can cure various illnesses, in addition to a number of other supposed health benefits. There is no scientific basis to back these beliefs up.

The graffiti in Ho Chi Minh City aims to educate locals on the importance of this issue. According to Nhi Thoi, program manager at the Center of Hands-on Actions and Networking for Growth and Environment (CHANGE), the street art is part of an awareness-raising campaign to inform people on the topic that began in 2013. The group specializes in initiating and developing environment and “climate change movements in Vietnam,” according to their website. One of these PSAs aired on television screens located next to elevators at some of the city’s apartment buildings that normally show product advertisements. In the video, national celebrities explained the need to save the world’s remaining rhinos, while graphic images of poached animals with their horns sheared off drove the message home.

Nhi explained that the aim is to create social pressure in order to persuade rhino horn users to change their ways.

“It’s really hard to tackle the end-users, for example businessmen and high-ranking government officials, so we need to go around and talk to many other people,” she said. The graffiti project began as a low-cost way to further this public conversation. “When I drove around the city I saw a lot of empty spaces, like dirty walls, and sometimes they had been vandalized. I asked myself, ‘Why don’t we paint our message on the walls?'” 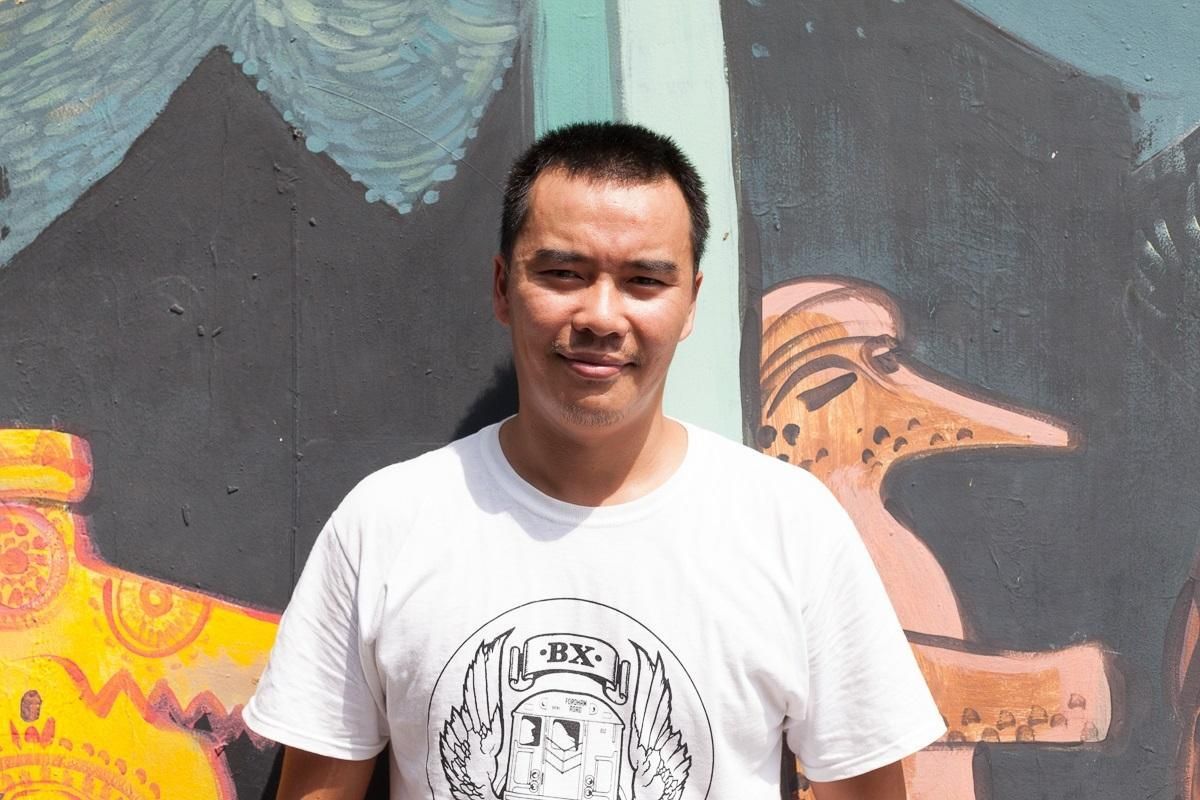 Suby One, a prominent French graffiti artist based in Ho Chi Minh City, has collaborated with CHANGE for three years and played a prominent role in bringing the rhino art campaign to life. “They contacted me and told me they want to change the audience,” he said.

Instead of communicating through TV ads, CHANGE would bring its message to the streets in hopes of reaching the general public.

“They had celebrities before and now they want to reach the real people so that they know the rhino issue,” Suby said. “They wanted it so that we could paint and people would come and talk to us while we were working.”

Suby and CHANGE, in partnership with global conservation organization WildAid, invited 11 local and international artists to create designs featuring rhinos. It took months for Nhi and her team to obtain local government approval. 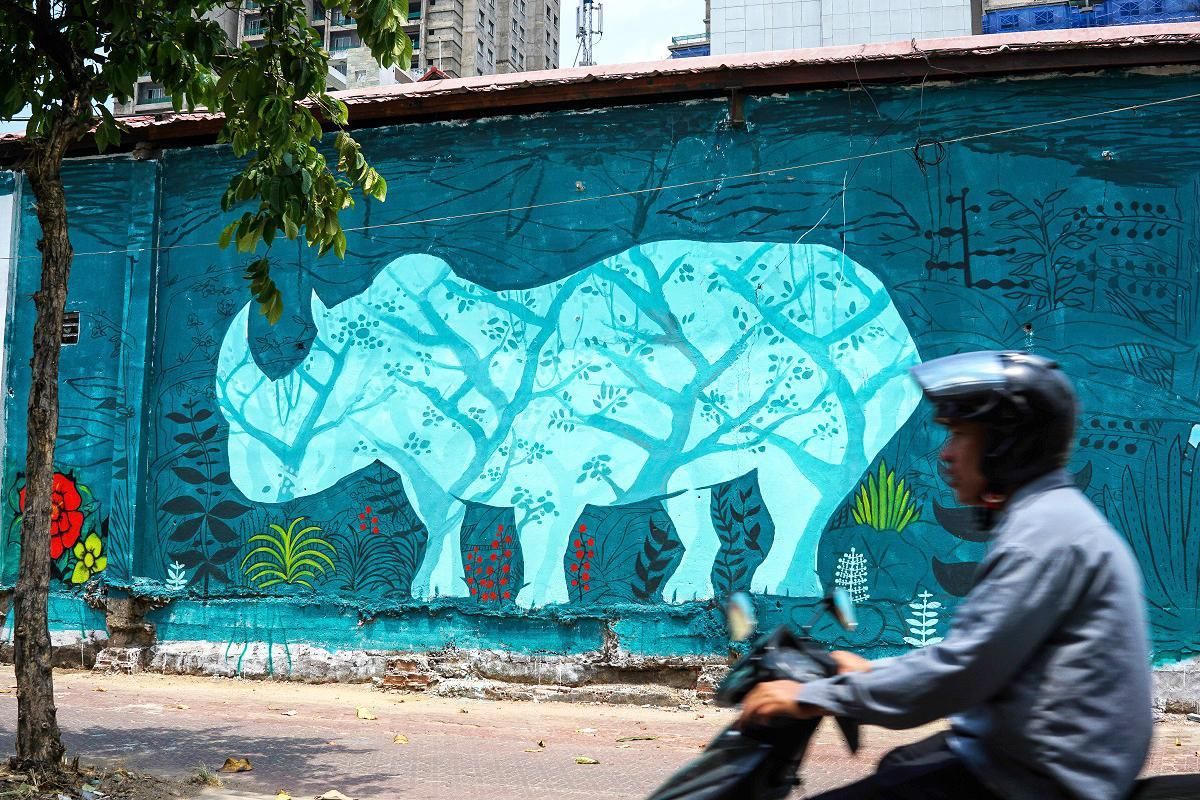 “From the beginning, I wanted our message to be very aggressive, so I wanted the artists to draw something about a dead rhino or something stunning,” she said. “But since we’re doing this in public, we needed approval from the authorities and they didn’t want something negative.”

CHANGE finally got the green light in early March and their team jumped into action, with an aim to complete the artwork in one month. The pieces, spread across a number of streets in Ho Chi Minh City’s central District 1, are striking. Each portrayal is unique, but all carry the same plea: Save the rhino. 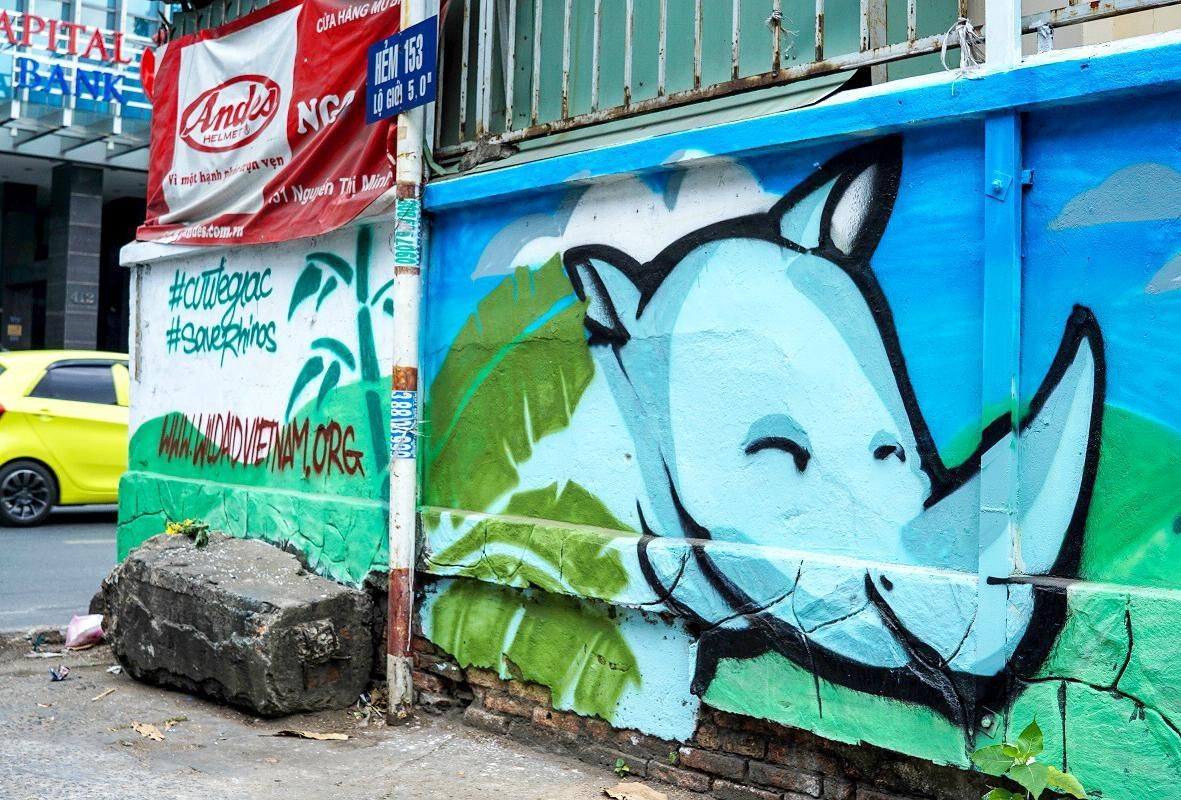 “I want to create love for rhinos,” Nhi said. “In some images we had differences, like the rhino’s horn exploding or the shadows of other rhinos that weren’t actually there. We wanted to convey the message that the rhino is close to extinction and needs protection.”

According to the conservation organization Save the Rhino, at the end of 2015 there were an estimated 30,000 rhinos remaining in the wild in Africa and Asia. At the start of the 20th century millions of rhinos lived in these regions. Vietnam in particular continues to be a major player in the illicit international rhino horn trade. According to TRAFFIC, a wildlife trade monitoring network, in March 2017 alone there were two seizures—one in Bangkok and one in Hanoi—totaling 67 rhino horns. The Bangkok case involved a Vietnamese national, while no suspects were named in the other.

TRAFFIC used the opportunity to call on the Vietnamese government to honor its commitment to the Convention on International Trade in Endangered Species of Wild Fauna and Flora (CITES) and prosecute wildlife crimes more vigorously. According to the organization, less than 1 percent of criminals involved in such activity in the country are successfully prosecuted.

The graffiti campaign has been a bright spot, though and garnered extensive attention from the public and the media. 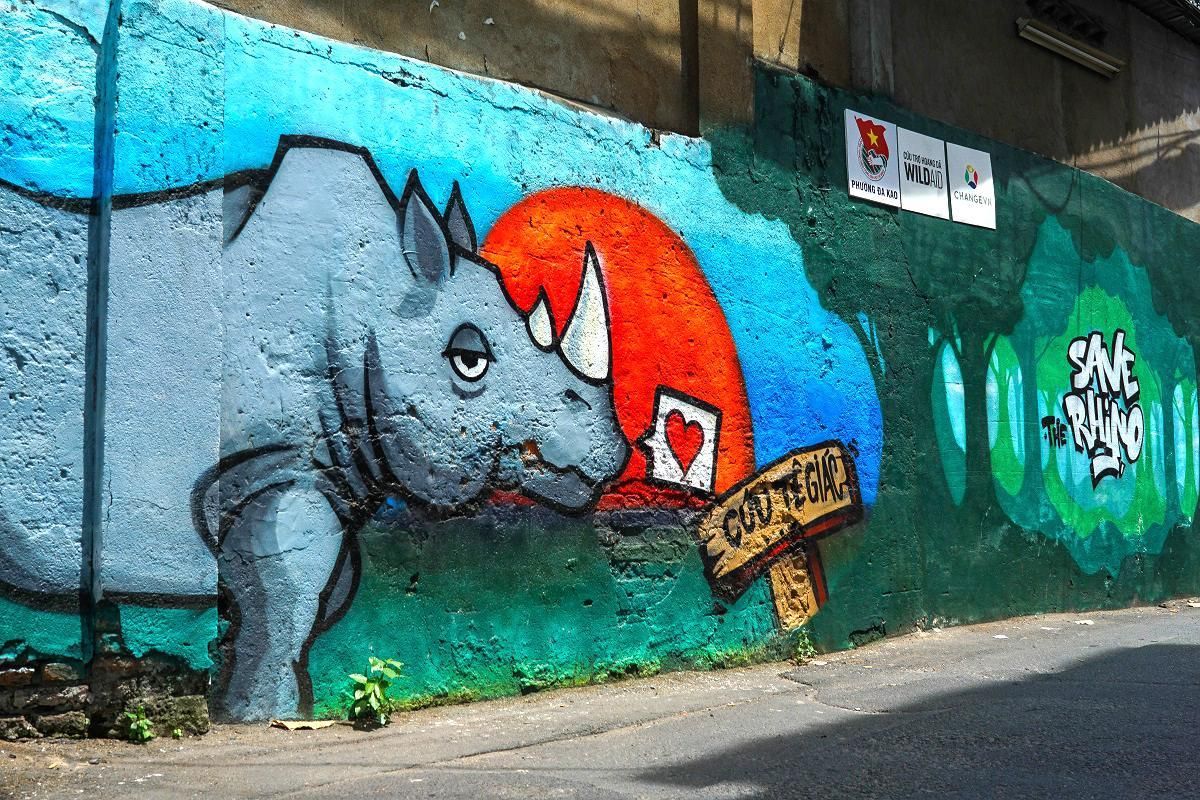 “In the beginning they [people in the neighborhoods] didn’t really support us, but when they saw us clean the walls and draw beautiful pictures they warmed up and were really supportive,” Nhi said. “They brought us water and cake and brought their kids to play with us and talk about rhinos.”

Suby believes there has been an outpouring of support because of the role art can play in activism.

“I think graffiti is something new here and people are getting interested in it,” he said. “You can reach more people with art—especially on the streets … I think touching the people and the neighbors, that’s the strength of street art.”

Philip Genochio, a British expat based in Ho Chi Minh City, was also involved in the campaign as an artist. 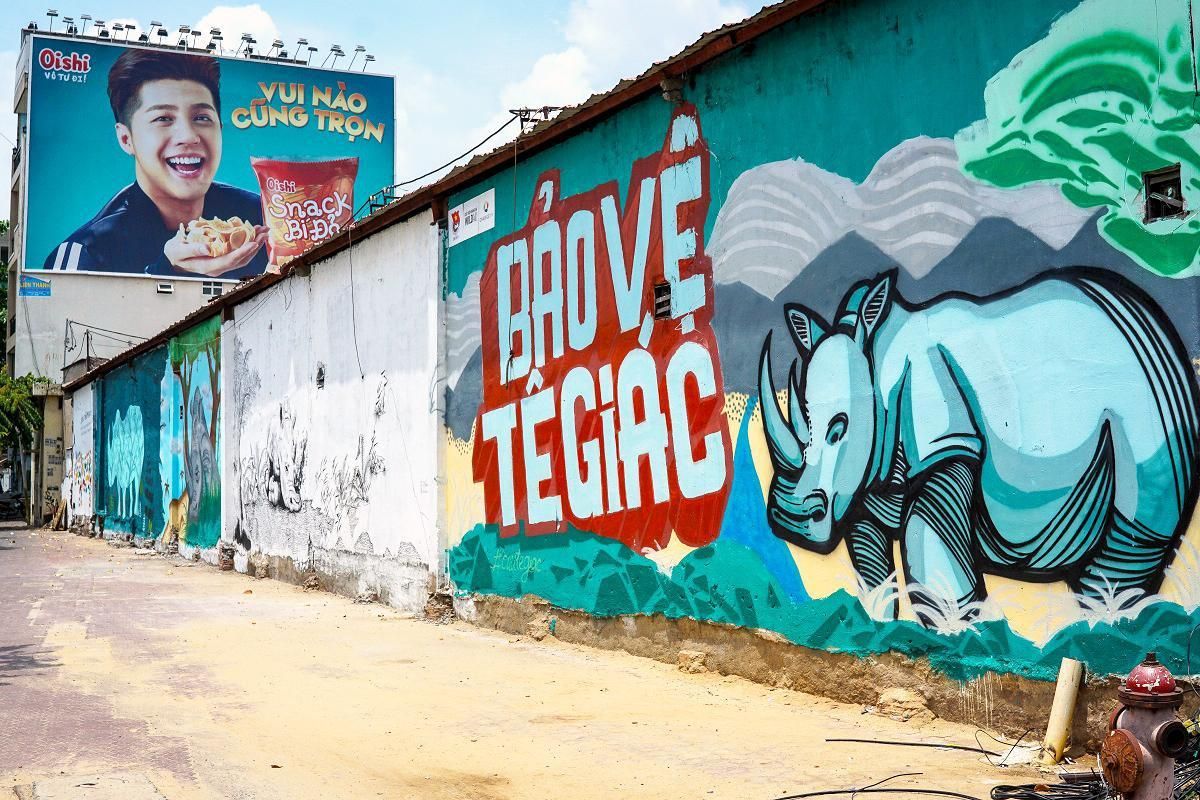 “For me, it goes beyond rhinos specifically,” he wrote via email. “It’s part of a much bigger problem of wildlife of all descriptions being killed in the name of vanity and ignorance.”

His design in the campaign features the outlines of many small rhinos forming the shape of a large rhino. “I wanted something that had impact; something that would at least get people’s attention,” he said. “Also, I liked the idea of using vivid colors to represent happiness, joy and well-being … we should have these thoughts in our minds when thinking about wildlife.”

Genochio added that he wishes to see the campaign spread an appreciation for art as well.

“On a lighter note, I hope people see the benefit that graffiti and street art brings to a city and its neighborhoods,” he said. “It’s uplifting, it’s characterful, it’s inspiring … why wouldn’t you want to see this around the city?”