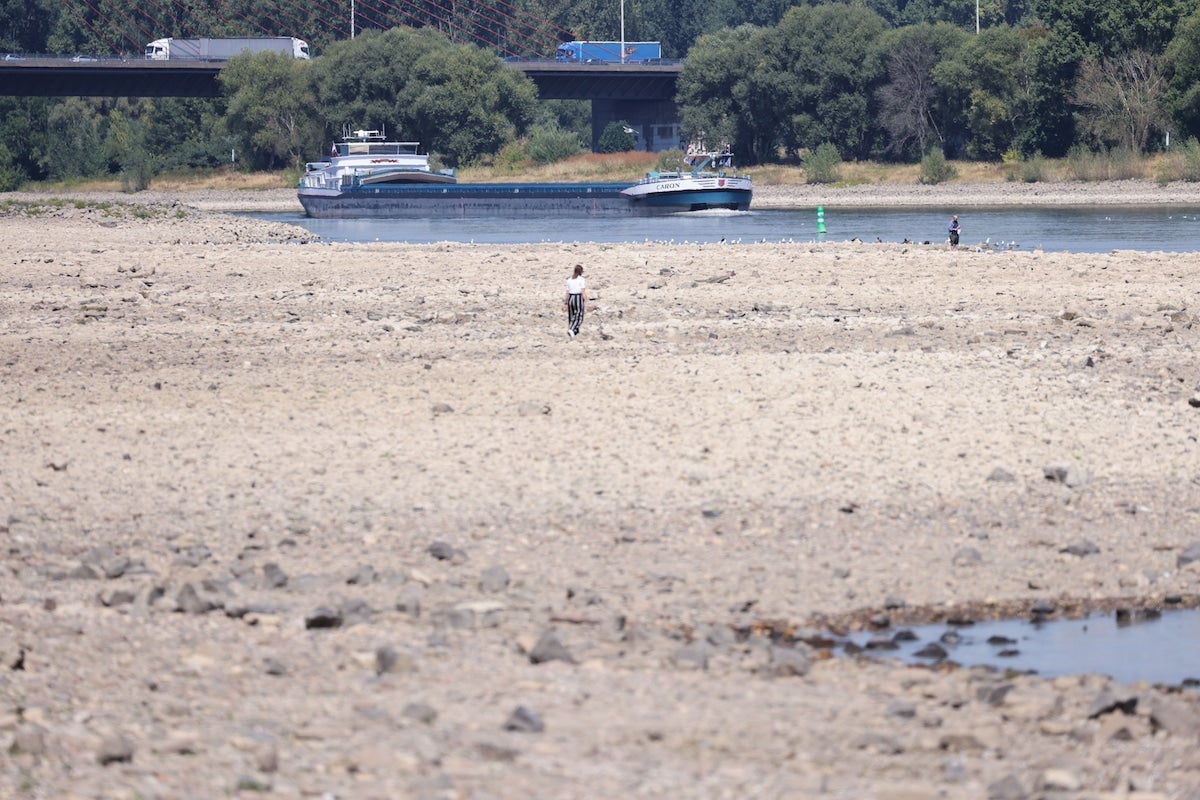 Following weeks of scorching temperatures and little rainfall, the water levels of Germany’s Rhine River, a major shipping channel for products like gas, coal, grains, and minerals like the iron ore used to make steel, are getting so low it will become impassable later this week, creating havoc for shipments.

The Rhine, one of Europe’s chief waterways, begins in the Swiss Alps and forms part of the Switzerland-Liechtenstein, Swiss-Austrian and Swiss-German borders before running along the border of France and Germany, through the German Rhineland, into the Netherlands and emptying into the North Sea near Rotterdam.

According to the German Federal Waterways and Shipping Administration, water levels at Kaub, west of Frankfurt, are predicted to drop to just below 16 inches (40 centimeters) on Friday, reported The Telegraph. At that level, the river becomes virtually impassable for many freight ships.

The water level being measured isn’t the river’s actual depth, but a navigability marker.

Levels are expected to fall again on Saturday to between 14 and 15 inches.

“If levels at Kaub drop to 35-55 centimeters in the next two weeks, some barges won’t be able to cross the Rhine at all, while others would carry less cargo,” chemical company BASF said on Wednesday, according to Bloomberg.

The situation on the Rhine comes as Europe is experiencing its most dire energy crisis in many years due to Russia’s restrictions on natural gas exports, which have caused prices to skyrocket as tensions continue over the country’s invasion of Ukraine.

“Before the war it was definitely 1 in 10 boats were doing coal, and since the war we’re definitely at 1 in 5, probably more. So coal transport since the war in Ukraine jumped up all at once,” said captain of the Servia Peter Claereboets, as Reuters reported.

The Servia carries iron ore from Rotterdam to the Duisburg plant of German steelmaker Thyssenkrupp and can only load 30 to 40 percent of what it’s able to carry in order to not risk running aground.

The situation is a stark example of how the climate crisis can affect the transportation of goods, with ripple effects to the energy sector.

The Rhine was so low in certain places that boats were tethered below the landings where people walk along the waterfront, Reuters reported.

“Normally you have more than two meters under the ship but now you only have 40 centimetres in some places, Claereboets told Reuters. “And then for us the challenge is to get past those points without touching, without damaging the ship. Because of the low water levels, the sailing route gets narrower, and we actually start travelling like trains, in a convoy.”

The Rhine River is fed by a combination of rain and run-off from glaciers, but the glacial amount has diminished as climate change has caused the ice formation in winter to become less than the melting of glacial ice in the summers, reported Bloomberg.

The federal weather service in Switzerland reported that it was probable that the Rhine would drop to crisis levels due to last winter’s below-average snowfall and the erosion of the glaciers.

Further downriver at Duisburg, the cutoff level for economical transport of certain materials is 150 centimeters, with the current level at 172 centimeters.

Power plants and factories will still be able to receive supplies by railway or roads, but transporting fuel that way is much more costly.

The cost of transporting freight on the Rhine has increased from about $21 in June to about $112 for a liquid tanker vessel, Reuters reported.

The current situation has been compared to low levels on the river in 2018.

“I think it’s more dangerous this time because the supply situation is tight anyway and the coal-fired power plants in particular, which are extremely important for generating electricity, are likely to be hit harder,” said economist at commercial banking company Landesbank Baden-Württemberg, Jens-Oliver Niklasch, as reported by Reuters.