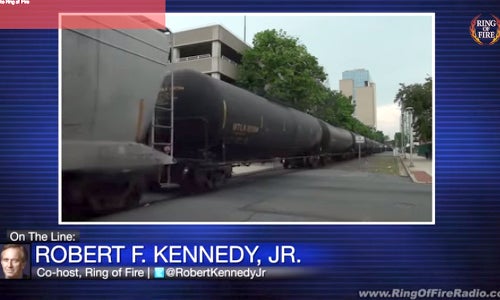 Robert F. Kennedy, Jr. can envision it now—rail cars leaving a shiny, expanded oil terminal near his neck of the woods in Albany, NY, heading south toward the Big Apple. All is well until the cars derail spilling thousands of Bakken crude oil gallons into the nearby Hudson River.

Kennedy and the rest of the nation saw such a derailment in Lynchburg, VA in late April when 50,000 gallons spilled into the James River. Virginia health officials said the James River was safe less than two weeks later, but Kennedy doesn’t think Albany would so lucky because “World’s End,” the 200-foot-deep portion of the Hudson near rail tracks that would prevent any chance of a true cleanup in the event of a spill.

“All that oil, which is very, very toxic, that stays at the bottom,” he said last week on his Ring of Fire radio program. “That’s very, very difficult to clean up [and] would affect the entire Hudson River ecosystem, as well as the health of communities that use the river for drinking water and recreation activity.”

That’s why he’s trying to fight against the expansion of an Albany terminal, as well as the development of others in his state. It’s also why he spoke out against it on his show.

He says North Dakota obtained the lowest unemployment rate at a cost that simply wasn’t worth it—incidents like the oil train collision at the end of 2013 that caused 21 train cars to catch fire.

“We’re now seeing spills all over the place, and we’re going to see a lot more,” Kennedy said. “Fiery derailments that have taken place—there’s been six of them in the last 10 months. Some of them have killed dozens of people.”