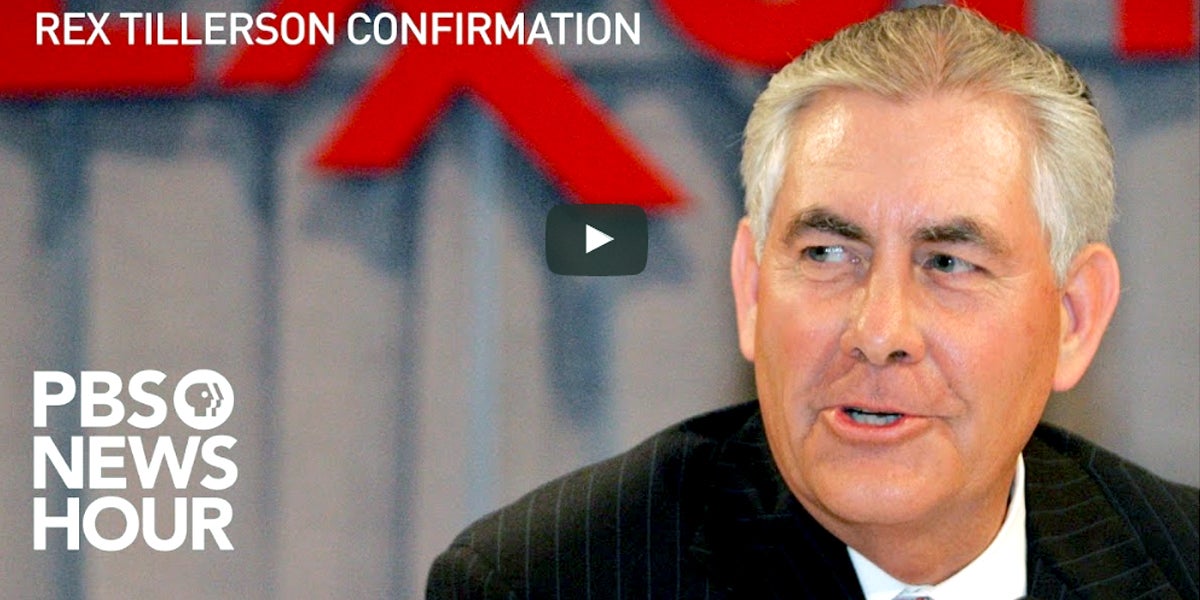 Secretary of state nominee and former Exxon CEO Rex Tillerson testified before the Senate Foreign Relations Committee on Jan. 11. Tillerson is already under fire for making the seemingly false claim that Exxon has not lobbied against sanctions on Russia and other nations that would affect Exxon’s business dealings, but here are five other climate change-related takeaways that reporters should keep in mind in their coverage of the hearing and Tillerson nomination going forward.

As researchers at Harvard and MIT have documented, Tillerson has falsely claimed in the past that the temperature record “really hadn’t changed” over the previous decade and repeatedly made scientifically inaccurate claims “seeking to sow doubt about the reliability of climate models.”

Tillerson again wrongly cast doubt on climate models during the confirmation hearing. When asked by Sen. Bob Corker (R-TN) whether climate change is caused by human activities, Tillerson replied that the “increase in the greenhouse gas concentrations in the atmosphere are having an effect,” but that “our ability to predict that effect is very limited.”

In reality, “climate models have proven themselves reliable in predicting long-term global surface temperature changes,” as The Guardian’s Dana Nuccitelli has noted. Indeed, in remarks to Mashable responding to Tillerson’s comments, Pennsylvania State University climate scientist Michael Mann similarly said, “Climate models have proven extremely skillful in predicting the warming that has already been observed.” And David Titley, the former head of the Navy’s climate change task force, explained, “The ability of climate scientists to predict the future is significantly more skillful than many other professions (economics, intelligence, political science) who try and predict the future.”

As Texas Tech University climate researcher Katherine Hayhoe told Mashable, climate projections of emissions scenarios are “based on physics and chemistry, the fundamentals of which have been understood” since the 1850s.

Among the “others” who disagree with Tillerson is the Pentagon, which has called climate change a “security risk” and said that considering the effects of climate change is essential to meeting the Defense Department’s “primary responsibility” to “protect national security interests around the world.” A 2014 Defense Department report similarly stated that climate change “poses immediate risks to U.S. national security” and a bipartisan group of defense experts and former military leaders recently sent a briefing book to President-elect Donald Trump containing recommendations for addressing these risks.

For its part, the State Department’s Office of the Special Envoy for Climate Change calls climate change a “global threat.”

Tillerson refused to answer questions from Sen. Tim Kaine (D-VA) about media investigations documenting that Exxon’s own scientists had confirmed by the early 1980s that fossil fuel pollution was causing climate change, yet Exxon funded organizations that helped manufacture doubt about the causes of climate change for decades afterward. Tillerson declared that he was “in no position to speak on [Exxon’s] behalf” and that “the question would have to be put to ExxonMobil.” Kaine explained that he wasn’t asking Tillerson to respond on behalf of Exxon, but rather to confirm or deny the accuracy of the allegations against the company, which he ran until the end of December. When Kaine asked Tillerson whether he was unable or unwilling to answer Kaine’s questions, Tillerson replied: “A little of both.”

The media reports on Exxon, published in the fall of 2015 by InsideClimate News and the Los Angeles Times, prompted attorneys general in New York, California, and Massachusetts to each launch investigations of Exxon that are still ongoing. As InsideClimate News noted, “If Tillerson spoke about this under oath at this hearing, it conceivably could complicate matters for lawyers at the company he led.”

Under Tillerson’s leadership, Exxon issued several statements in support of the Paris climate agreement, which committed countries around the world to cutting emissions, with the aim of limiting global warming to 1.5 degrees or 2 degrees Celsius. However, Tillerson declined to explicitly endorse the Paris agreement during his confirmation hearing.

In case you missed it, Tillerson answered questions about whether the United States would remain in the Paris climate accord in a such a non-committal way that he left open the possibility for the Trump administration to ditch the agreement or pull out of the UN Framework Convention on Climate Change, as some of the President’s team have recommended.

Tillerson suggested that the “America First” motto that Trump ran on would be the main criterion in assessing participation in the global climate accord.

Responding to a question from Massachusetts Democrat Edward Markey about staying in the accord, Tillerson said that Trump would conduct a thorough review of global and bilateral accords on climate and that he would make his views known to the new president, who has vowed to ‘cancel’ the agreement and who has most recently called climate change a ‘hoax’ invented by the Chinese to hobble American business. Tillerson did not say what his views or recommendations would be.

Tillerson then continued: “I also know that the president as part of his priority in campaigning was to put America first. So there’s important considerations as we commit to such accords and as those accords are executed over time, are there any elements of that put America at a disadvantage?”

Markey then asked if it should be a priority of the U.S. to work with other countries to find solutions to that problem.

Tillerson answered: “It’s important for America to remain engaged in those discussions so we are at the table expressing a view and understanding what the impacts may be on the American people and American competitiveness.”

Trump has said that he would “renegotiate” or “cancel” the Paris agreement. He’s also claimed since the election that he has an “open mind” about the agreement, but internal documents from Trump’s transition team “show the new administration plans to stop defending the Clean Power Plan,” which is the linchpin of the U.S.’ emissions reduction commitments under the Paris agreement.

Some reporters are interpreting Tillerson’s reference to a “seat at the table” as support for the Paris agreement, but his broad phrasing could also apply to seeking to rewrite the terms of the deal—or withdrawing from it altogether. Later in the hearing, Tillerson added that he believes it’s important to have a “seat at the table” in order to “judge the level of commitment of the other 189 or so countries around the table and again adjust our own course accordingly.”

5. Tillerson did not address climate change, oil or even Exxon itself in his opening remarks.

In their initial coverage of the Tillerson nomination, several major media outlets uncritically portrayed Tillerson as an advocate for action to combat climate change, despite his—and Exxon’s—troubling track record on the issue. But when Tillerson was given the opportunity to outline his vision and priorities for the State Department during his opening statement to the Senate Foreign Relations Committee, he did not once mention climate change, lending credence to the contention of Tillerson’s critics that his and Exxon’s professed support for climate action “was all PR.”

Tillerson’s opening statement also neglected to mention oil or even Exxon itself, where Tillerson has worked for the last 41 years. That glaring omission hints at a lack of concern for crucial questions about whether Tillerson’s oil industry experience prepares him to serve as America’s top diplomat or whether, as The New Yorker’s Steve Coll put it, he will be willing and able to “embrace a vision of America’s place in the world that promotes ideals for their own sake, emphatically privileging national interests over private ones.”

Watch the confirmation below: