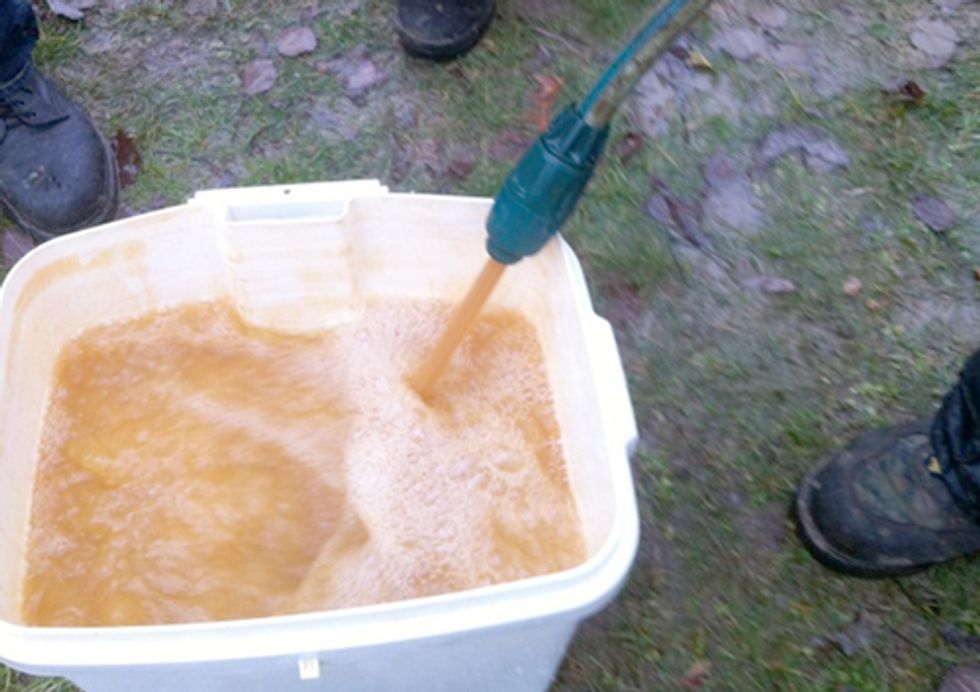 “I don’t know what I’m going to do,” John “Denny” Fair said yesterday as he watched a water company worker pour out hundreds of gallons of clean fresh water onto the cold ground and remove the water tank under orders from Rex Energy. “Everybody had good water a year ago,” Fair said, referring to his own water and that of neighboring families who reported that their water changed color after Rex began drilling and fracking in Conoquenessing Township, Butler County, Pa.

Rex has admitted that two of their Conoquenessing gas wells had casing failures in late 2010, shortly before Conoquenessing families, in an area called the Woodlands, reported that their water changed abruptly in January 2011.

Marcellus Outreach Butler is collecting water for at least 11 families and will confront Rex Energy on March 1 at its office in the town of Butler at 4 p.m., demanding that Rex reinstate clean water supplies for all the families. That address is 407A West Jefferson Street, Butler, Pa. 16001. Participants will first gather at 3:30 p.m. at the Butler Farmer’s Market in Butler, Pa. between Race St. and Shore St.

Denny Fair, unemployed, receives aid from neighbors for electricity and meals from a food bank, according to the Pittsburgh Times-Tribune’s Timothy Puko. The water from Fair’s well, pictured here, ran orange-brown. “Personally, I wouldn’t drink it,” commented Diane Sipe of Marcellus Outreach Butler, who was on the scene yesterday. Fair does odd jobs and is unable to afford either replacement water or a water filtration system, he said.

Several families fought hard to keep their water tanks, called “water buffaloes,” but families without means have no alternative to using water which appears to be contaminated, making gas drilling impacts most severe for the most vulnerable families. Two people with disabilities live at the property where Rex Energy ordered the water company to remove its water buffalo one day early, according to Marcellus Outreach Butler organizer Diane Sipe. Sipe said that one Connoquenessing family which depended on a water buffalo provided by Rex Energy until this week is now staying with relatives, unable to care for their newborn with a limited water supply.

In addition to residents’ complaints about contaminated well water, Rex Energy drilling, fracking, gas processing and waste handling operations have fouled the air and surface waters, according to multiple sources. Pennsylvania Fish and Boat Commission Officer Nestor said last week that the Commission is now investigating a dozen drilling mud spills, which impacted a dozen different creeks in the Connoquenessing watershed just since December, 2011. Workers have reported rashes and boils on their skin when working with drilling mud, according to Susquehanna County resident Rebecca Roter; the boils diminish or disappear only during weeks off.

Protecting Our Waters began raising funds last week to help provide clean replacement water for the families, but has only raised $910 so far towards the cost of supplying twelve families with water for drinking, showering, washing dishes and laundry.