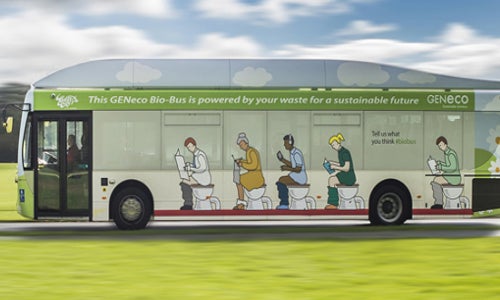 A new frontier in biofuel has been attained in the UK.

Wessex Water in southern England announced that it is supplying fuel for a 40-seat “Bio-Bus,” owned by the Bath Bus Company, that will be running regular trips from Bath in southwest England to the Bristol Airport. The city of Bath launched the bus to reduce its climate change-causing greenhouse gas emissions. And Wessex Water is ready with an ample and limitless supply of clean, renewable fuel.

The passengers on the Poo Bus may be fueling it every time they go to the loo. Photo credit: GENeco

The fuel? Biomethane made from human excrement. Each tank of gas will be provided by the equivalent of the annual waste production from five people. Think of those trips to the loo as salvos in the battle against climate change!

According to GENeco, the Wessex Water subsidiary producing the endlessly renewable fuel, it produces fewer emissions than the diesel fuel typically used to power buses. GENeco is manufacturing the gas at an anaerobic digestion plant at Bristol sewage treatment works. The company has installed a gas refueling plant for the new Bio-Bus. It also injects the gas into the national grid.

“Through treating sewage and food thats unfit for human consumption we’re able to produce enough biomethane to provide a significant supply of gas to the national gas network that’s capable of powering almost 8,500 homes as well as fueling the Bio-Bus,” said GENeco general manager Mohammed Saddiq. “Gas-powered vehicles have an important role to play in improving air quality in UK cities, but the Bio-Bus goes further than that and is actually powered by people living in the local area, including quite possibly those on the bus itself. Using biomethane in this way not only provides a sustainable fuel, but also reduces our reliance on traditional fossil fuels.”

“The bus also clearly shows that human poo and our waste food are valuable resources,” said Charlotte Morton, chief executive of the Anaerobic Digestion & Bioresources Association (ADBA). “Food which is unsuitable for human consumption should be separately collected and recycled through anaerobic digestion into green gas and biofertilizers, not wasted in landfill sites or incinerators. The Bio-Bus will also help to demonstrate the true value of separate food waste collections, which are now obligatory in all other regions, to the English government.”

She estimated that biomethane could provide 10 percent of the UK’s gas needs.

“Sustainability and surface access are key areas of focus for us and we welcome new technologies which could reduce the environmental impact of getting to and from the airport,” said Bristol Airport’s environmental manager Melanie King. “With Bristol set to be European Green Capital in 2015, this is one of several exciting initiatives we hope to be involved with over the course of the year.”