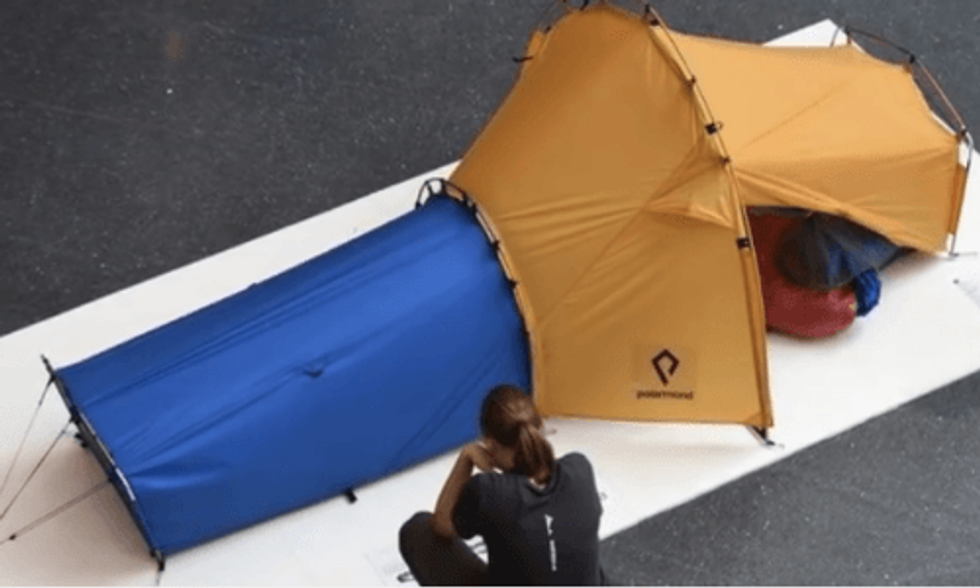 Camping is wonderful for many reasons, but it can be hard to appreciate the outdoors without a good night's sleep. One of the worst parts of camping (at least for me) is lugging and setting up all that gear—tent, sleeping bag, mat—just to get decent shut-eye on a cold night.

Thankfully, a group of Swiss scientists from the Swiss Federal Laboratories for Materials Science and Technology (EMPA) came up with a genius solution for picky campers like me: the Polarmond tent.

This ultralight, (weighing just over 4 pounds) one-person tent or bivouac shelter consists of a waterproof-breathable outer skin, an inner sleep shell made of high-loft fleece and a cushioned sleeping pad.

Somehow, the product's components protect you from inclement weather such as wind and rain and can wick away excess interior moisture at the same time. Heck, it even looks comfortable (at least more comfortable than a sleeping bag).

What's particularly special about the product, as the company claims, it stays warm in temperatures as low as -22 degrees Fahrenheit using nothing more than the occupant's body heat. It appears that EMPA researchers Martin Camenzind and Matthew Morrissey were inspired by an astronaut's space suit to insulate the product.

If it gets too hot inside the tent, the interior temperature can be regulated by an zippered ventilation port. The same port can also be used to release excess moisture.

Not only that, the breathable inner membrane is like an all-encompassing blanket that draws moisture away, meaning the occupant won't get sweaty or cold from sweat. After waking up in the morning, the collected moisture can be shaken out.

Morrissey and Camenzind have appropriately nicknamed the Polarmond sleep system the "magic tent."

“The All-in-One Sleeping System by Polarmond embraces research and development from the last 20 years,” the judges said. “Innovative and extremely functional.”

Polarmond CEO Walter Krummenacher said he is "very satisfied with our product" but adds that it is "not quite finished yet." The company says it is closing contracts with material suppliers and optimizing other details on the product. A multi-person design is also in the works.

Polarmond hopes the magic tent will hit the market by March 2016. The price has not yet been announced.

Finally … Uber for Bicycles Is Here