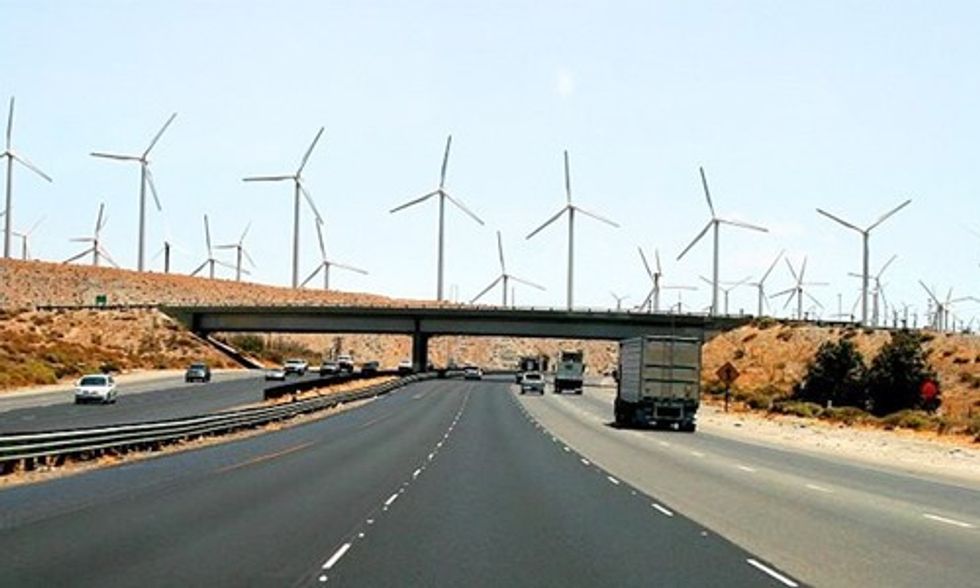 The U.S. could reduce greenhouse gas emissions from electricity generation by 78 percent below 1990 levels within 15 years just by using renewable sources such as wind and solar energy, according to a former government research chief.

The nation could do this using only technologies available right now and by introducing a national grid system connected by high voltage direct current (HVDC) that could get the power without loss to those places that needed it most, when they needed it.

This utopian vision—and it has been dreamed at least twice before by researchers in Delaware and in Stanford, California—comes directly from a former chief of research in a U.S. government agency, the National Oceanic and Atmospheric Administration (NOAA).

Dr. Alexander MacDonald, a distinguished meteorologist, was until recently, the head of NOAA’s Earth System Research Laboratory in Boulder, Colorado.

He and colleagues at the University of Colorado report in Nature Climate Change that instead of factoring in fossil fuel backup or yet-to-be-invented methods of storing electricity from wind and solar sources, they took a new look at the simple problems of supply and demand in a nation that tends to be sunny and warm in the south and windy in the north, but not always reliably so in either place.

Their reasoning was that storage technologies could only increase the cost of renewable energy and increase the problem of reducing carbon emissions.

So they modeled the U.S. weather on timescales of one hour over divisions of the nation as small as 13 square kilometers to see what costs and demand and carbon dioxide emissions would be and how easily renewable power could meet the demand.

They reasoned that even though wind turbines are vulnerable to periods of calm and that solar energy sources don’t do much in rainy weather or at night, there would always be some parts of the country that could be generating energy from a renewable source.

They then factored in future costs—the cost of both wind and solar has been falling steadily—and scaled up renewable energy to match the available wind and sunlight in the U.S. at any time.

“Our research shows a transition to a reliable, low-carbon, electrical generation and transmission system can be accomplished with commercially available technology and within 15 years,” Dr. MacDonald said.

The model embraced fossil fuel sources as well as renewable ones, for purposes of comparison. It revealed that low cost and low emissions are not mutually exclusive. The U.S. could have both.

“The model relentlessly seeks the lowest-cost energy, whatever constraints are applied,” Christopher Clack, a physicist and mathematician with the Cooperative Institute for Research in Environmental Sciences at the University of Colorado Boulder and a co-author of the study, said. “And it always installs more renewable energy on the grid than exists today.”

Even in a scenario where renewable energy cost more than experts predicted, the model produced a system that cut carbon dioxide emissions 33 percent below 1990 levels by 2030 and delivered electricity at about 8.6 cents per kilowatt hour (kWh). By comparison, electricity cost 9.4 cents per kWh in 2012.

If renewable energy costs were lower and natural gas costs higher, as is expected in the future, the modeled system sliced carbon dioxide emissions by 78 percent from 1990 levels and delivered electricity at 10 cents per kWh. The year 1990 is the baseline for greenhouse gas calculations.

The model achieved its outcome without relying on any new electrical storage systems. The national grid did need augmentation from nuclear energy, hydropower and natural gas, but the real innovation would be the connection of large numbers of low-cost renewable energy sources to high-energy-demand centers, using efficient new transmission systems.

It seems that HVDC transmission is the key to keeping costs down and Dr. MacDonald compared such power links to the interstate highways that cross the U.S. and which transformed the U.S. economy 50 years ago.

“With an ‘interstate for electrons,’ renewable energy could be delivered anywhere in the country while emissions plummet,” he said.

“An HVDC grid would create a national electricity market in which all types of generation, including low-carbon sources, compete on a cost basis. The surprise was how dominant wind and solar could be.”