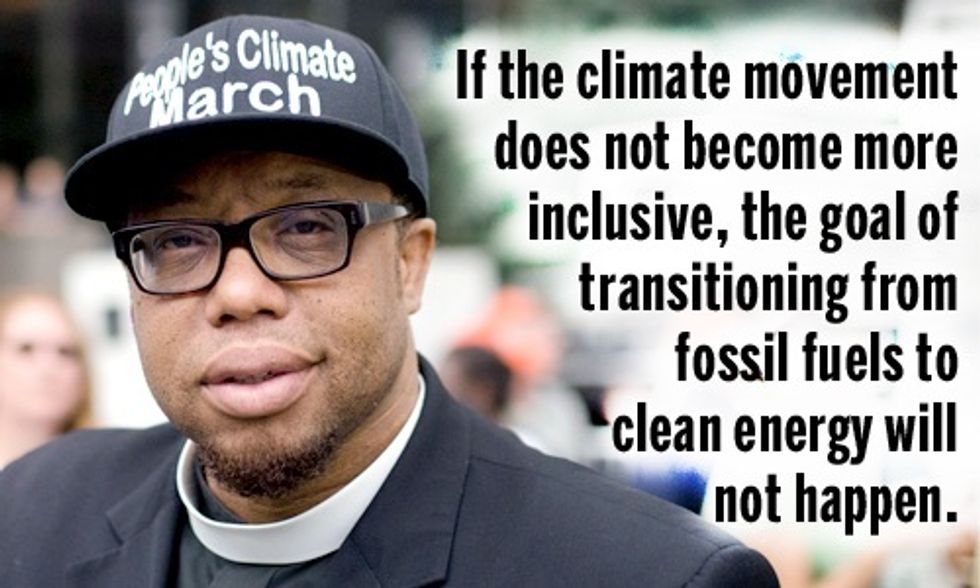 The objective of this convening is to build a movement of solidarity which includes climate crisis action and reestablishment of justice.

Many in the climate movement will agree that these questions must be answered, but will also wonder silently, why stop and deal with this question of building an inclusive climate movement now, when we are starting to win on so many fronts?

Last year was the biggest year of climate activism ever. More leaders from various sectors—from environmentalists and scientists, to CEOs and business leaders, to faith and moral leaders—are now lending their considerable influence to call for climate action at all levels of government, as well as in civic institutions and corporations.

Yet, to some degree, we are singing to the choir. The next critical step for the climate movement is contending for indelible mainstream cultural relevance. Put plainly, if the climate movement does not become more inclusive, the goal of transitioning from fossil fuels to clean energy will not happen.

This is the key to winning public support and political will for climate action that will meet the demands of science.

The modern environmental movement, some 50 years old, has invested tremendous amounts of resources in predominantly white and predominantly elite communities to fight for clean air, clean water, open space and a sustainable planet for all of us. This movement model has achieved incredible victories for the public good. The reality, however, is that there is not enough power in the environmental community alone to lead a global transition from fossil fuels to clean energy. The movement needs to expand, and to do so we need to re-frame the issue of climate change to make it an everyday, every person issue.

This free conference encourages community participation (although space is limited). The conference will work to bring new voices of great value to the climate movement. Through both democratic and economic strategies we are working to empower diverse communities to mobilize for powerful climate solutions.

I'm proud that we can have this ongoing conversation in the climate movement of what following people of color-led work is and means. With each iteration of the conversation we get closer to making fundamental change within our movement, which is a process we must model, because we are fundamentally asking the entire world to make some big and important changes for an equitable, sustainable, 100 percent clean energy future. It's quite simple, we (the climate movement) must be the change we want to see in the world.