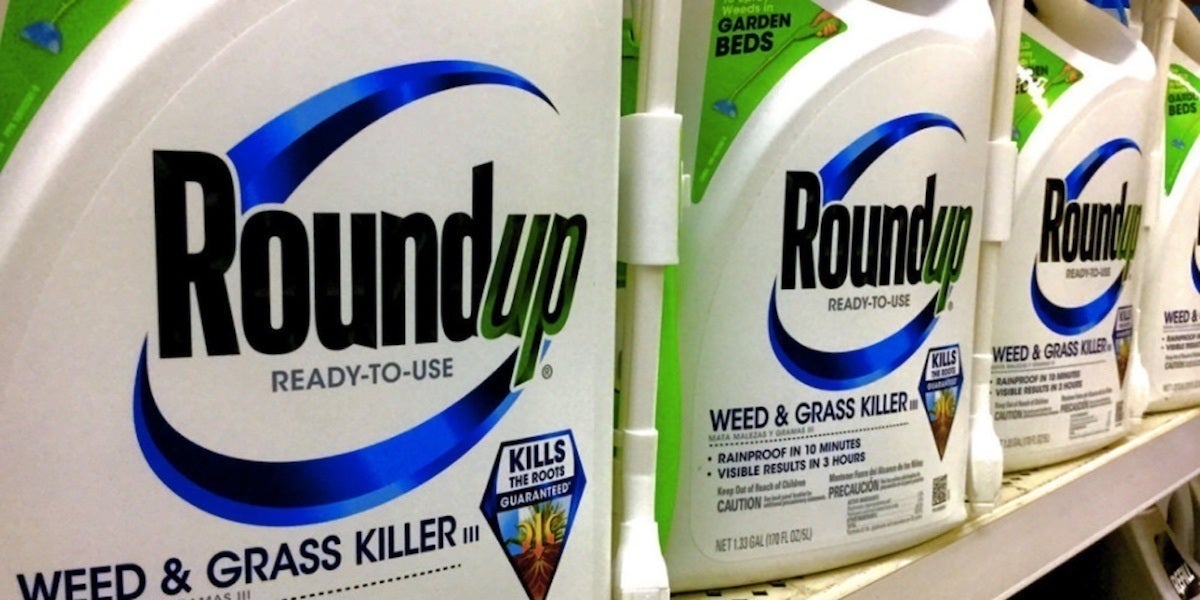 Glyphosate is the active ingredient in Monsanto's Roundup. Flickr

The controversy over the health risks of
glyphosate, the active ingredient in Monsanto’s weedkiller Roundup, has taken a surprising turn.

Dr.
Aaron Blair—a lead researcher on the International Agency for Research on Cancer (IARC) committee that classified glyphosate as “probably carcinogenic”—has been accused of “deliberately” withholding unpublished research that he admitted would have altered the cancer agency’s widely cited 2015 review.

The news comes as a surprising development in light of Monsanto’s
multi-district cancer lawsuits. Plaintiffs across the U.S. claim that they or their loved ones developed non-Hodgkin’s lymphoma due to exposure to glyphosate, pointing to the IARC cancer classification.

“Blair knew the unpublished research found no evidence of a link between glyphosate and cancer. In a sworn deposition given in March this year in connection with the case, Blair also said the data would have altered IARC’s analysis. He said it would have made it less likely that glyphosate would meet the agency’s criteria for being classed as ‘probably carcinogenic.'”

The IARC never considered the data because the agency has a rule against using unpublished data to asses a substance’s carcinogenicity. The data came from the Agricultural Health Study (AHS), on which Blair was a senior researcher, and sat unpublished for two years before IARC assessed glyphosate. He told Reuters that the information was not published in time because there was too much to fit into one scientific paper.

However, Monsanto told Reuters that Blair deliberately concealed the data. The company did not provide specific evidence of it being hidden. Two other experts, not connected to Monsanto, also did not understand why the data was not published.

Blair called the accusations that he deliberately did not publish the data to avoid consideration by IARC “absolutely incorrect.” And Reuters reported the IARC is “sticking with its findings” despite the new data about glyphosate.

The current debate over glyphosate all started in March 2015 when the IARC, the cancer research arm of the World Health Organization (WHO), concluded that the herbicide should be classified as “probably carcinogenic for humans.” However, other international bodies have refuted the IARC’s conclusion, including the European Food Safety Authority as well as the Food and Agriculture Organization of the United Nations—another body of the WHO. Monsanto has also adamantly contested the IARC’s findings.

The IARC’s conclusion has stirred an international row, from the European Union’s decision on whether to renew glyphosate’s license over health risks, to California’s decision in March to designate the herbicide as a known human carcinogen under the state’s Proposition 65.

EcoWatch reached out to experts and consumer groups for comment on the Reuters story.

Michael Hansen, senior scientist at Consumers Union, said the Reuters report was a “grossly misleading story attacking Dr. Aaron Blair” and criticized the way the Agricultural Health Study cited in the story was interpreted. Reuters “omits the fact that the data from the other epidemiology studies (all case control studies), and the meta-analyses, clearly show a statistically significant increase in non-Hodgkin’s lymphoma with glyphosate exposure.”

“In addition, the animal studies are very clear and show increases in cancer, including lymphomas,” he noted. “An analysis by Dr. Christopher Portier late last month … demonstrated that there were eight additional tumor sites with statistically significant increases due to glyphosate exposure, that European Food Safety Agency and European Chemical Agency failed to identify due to their scientifically flawed analysis.”

Hansen also said that Reuters discussion of the AHS ignores the unknown latency period for non-Hodgkin’s lymphoma exposure—or how long it takes between initial glyphosate exposure and the development of the cancer, and we don’t know how many years the AHS considers.

“Even if the updated AHS study did follow the population for 20 years, I’d argue that it still not would be definitive, since the latency could be a bit longer, say up to 25 years,” he said.

“Bottom line, this misleading article strongly supports Monsanto’s view that glyphosate is not associated with NHL.”

Genna Reed, science and policy analyst at the Union of Concerned Scientists‘ Center for Science and Democracy, defended IARC’s assessment.

“It is the responsibility of the independent experts composing IARC’s working groups to apply rigorous standards and select appropriate evidence to best analyze the risks of possible carcinogens,” Reed said.

“Monsanto’s effort to advance unpublished data and imply that a working group member intentionally concealed glyphosate data furthers its concerted campaign to undermine the credibility of IARC and to shift scrutiny away from its flagship herbicide.”

Wenonah Hauter, executive director of Food & Water Watch, said, “the latest development in the battle over glyphosate shows once again why we need a different approach to evaluating the safety of the chemicals used in our food system.”

“Rather than pitting individual scientific studies against each other in a courtroom after people are sick, we need a precautionary approach that would require long term safety testing of GMO crops and the herbicides used to grow them before they are allowed on the market,” Hauter concluded.

Ken Roseboro, editor and publisher of The Organic & Non-GMO Report, believes “the bigger story is that 300 plus million pounds of glyphosate are used in the U.S. each year and that it is increasingly found in air, rain and streams as well as our foods and bodies.”

“There is also a mounting body of research documenting its negative impacts on soil and beneficial soil organisms, plants, insects such as bees and human beings,” Roseboro added. “People who say glyphosate is safe remind me of ‘experts’ in the 1960s who said tobacco is safe. Some day people will look back and be horrified that pesticide poisons like glyphosate were used to produce our food.”