ReThink Energy: 'We Will Ensure Florida Keeps Fracking Out of Our State' 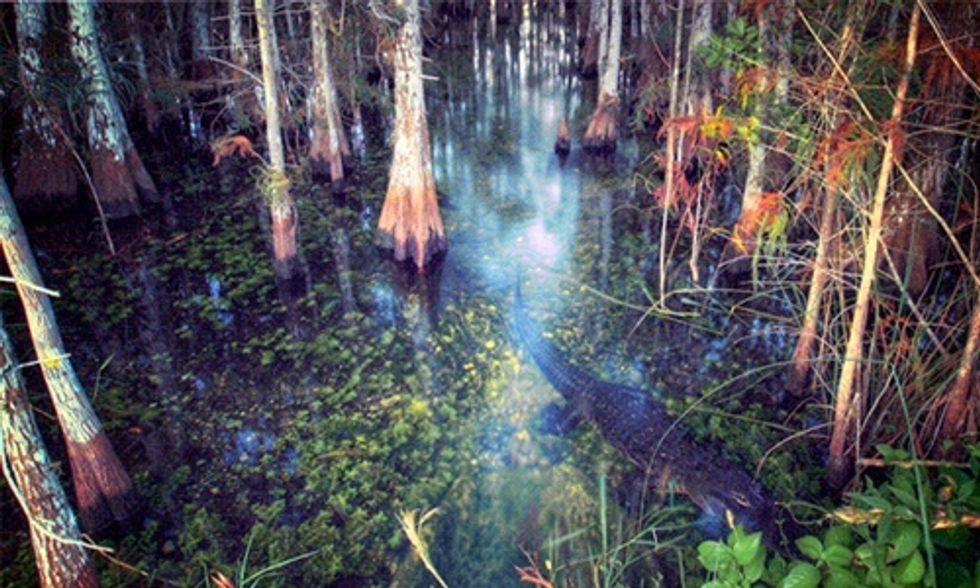 In 2013, ReThink Energy Florida was one of the few organizations fighting pro-fracking bills in the Florida Legislature in reaction to public attention on drilling near the Everglades. The bills failed to garner enough votes to make it into law. Each year since, state legislators have attempted to pass similar meaningless, pro-industry regulations. Each year, they have failed. But 2015 will mark the year that the tide turned in the battle to keep fracking out of Florida.

We will keep moving to ensure Florida does the right thing and keeps fracking out of our state forever. Photo credit: G. Fardner / U.S. National Park Service

We were among the Floridians shocked in 2014 upon learning that, while we’d been going to public hearings on one well permit, another had been secretly and illegally fracked. With this illegal procedure, a more dangerous form of unconventional drilling called "acid fracking" was introduced to the Everglades. The Florida Department of Environmental Protection (DEP) issued a cease and desist, but the oil company continued in defiance. DEP fined the company for $25,000—an amount that seemed like couch-change to the public.

As ReThink Energy Florida and its allies began to build public awareness, and leaders began to scrutinize the process, DEP got firmer with the company. Eventually, after the company failed to meet several simple demands, DEP revoked their permits.

By 2015’s legislative session, ReThink Energy Florida was one of the organizations in the Florida Anti-Fracking Coalition, which called for a ban on fracking in Florida. This coalition consisted of health and environmental groups, including Stonecrab Alliance, Food & Water Watch, Physicians for Social Responsibility of Florida, Florida Clean Water Network, Our Santa Fe Rivers, Environmental Caucus of Florida, Florida Progressives, and many other grassroots activists and organizations.

Due at least in part to its work educating and engaging the public, bans on fracking were filed in the Florida Legislature by Senators Soto and Bullard, and Rep. Jenne. Unfortunately, other legislators filed fracking regulation bills again, along with trade secrets exemption bills, which required a 2/3 majority in each chamber of the Legislature to pass. While these other legislators claimed to have worked with DEP, industry, and environmental groups, the few environmental groups that they invited to the table eventually withdrew their support because the legislators refused to amend the bills to meet their bottom-line requirements.

While the bans sat unmoving, the regulatory bills began moving quickly through committees. The coalition drove phone calls, emails, press events and public awareness across the state. The primary focus was that we need to ban, not regulate, fracking. The coalition spoke to many of the issues with the bills: they would have kept cities and counties from banning fracking and they were full of loopholes, including trade secret exemption rules written by and for industry. The public testified about these bills in committee, and reminded the legislators that a ban was another option. We knew we were getting better at speaking as a unified body when the opposition attempted to address our points. Still, we knew it was an uphill battle, as we were not only arguing against industry, but also against DEP.

The tide began to turn the penultimate week of session, as several leaders in the Senate expressed grave concern about the bills. These leaders told the sponsor they were disappointed in the few changes they’d seen so far.

The last week of session, the bills were scheduled for final debate on both floors. The House voted for the fracking regulatory bills but tabled the trade secrets exemption bill, perhaps because they were unsure it would have the votes to pass in the Senate.

No one expected what happened next, except maybe comedians who enjoy making fun of Florida politics. Because of disagreement between the Republican-led House and Republican-led Senate over Obamacare, the Speaker of the House ended session three days early, but without passing a budget—the one thing that they are constitutionally required to do. The move was a jab at the leadership in the Senate, and left several bills, good and bad, in limbo.

The Senate had three options: 1) let the bad regulatory bill die a natural and well-deserved death; 2) amend the bill and send it back to the House—who was not present to hear the amended bill, thereby killing it; or 3) Pass the bill as passed in the House, which would send it on to the Governor.

In these final days of the Senate, very few people still believed the bill should pass as written; seemingly only the head of the Florida Petroleum Council still supported it. Most importantly, several leaders in the legislature had expressed concern about the bill and had worked to come up with "fixes." However, because the House had ended their session, any amendments would render the bills dead.

Wednesday, after ReThink Energy Florida and its partners had burned the phone lines, held press conferences and written even more op-eds (such as this one from Our Santa Fe River), the Senate bill’s sponsor acknowledged that the bill would not pass.

Our work is not done. Next week, we will begin doubling down on our efforts to create the necessary groundswell for a permanent ban on fracking. But today, we celebrate a victory in the end of this legislative session: the birth of a new movement that calls on leaders to take our concerns about Florida’s Energy Policy and Environment into account. We will keep moving to ensure Florida does the right thing and keeps fracking out of our state forever.