Restoring Seagrasses Can Bring Coastal Bays Back to Life 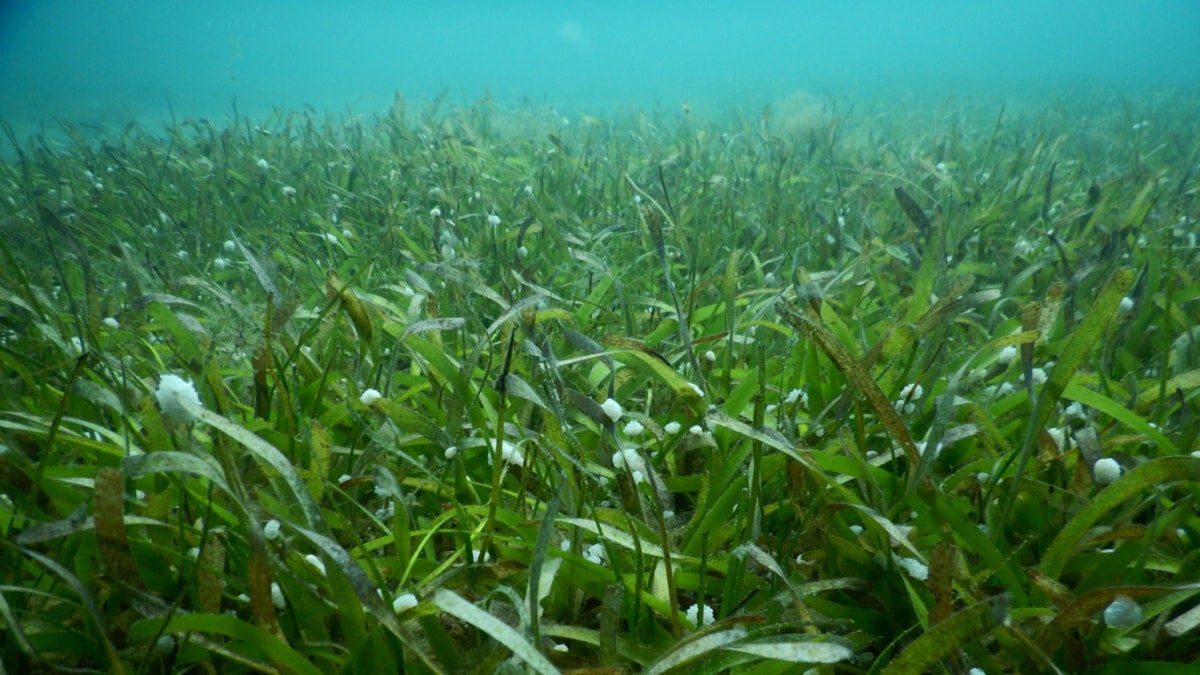 Marine scientists who study seagrasses have published a study describing how to reintroduce eelgrass into Virginia coastal bays. Flickr / CC by 2.0

A century ago Virginia’s coastal lagoons were a natural paradise. Fishing boats bobbed on the waves as geese flocked overhead. Beneath the surface, miles of seagrass gently swayed in the surf, making the seabed look like a vast underwater prairie.

More than 70 species of seagrasses grow in shallow waters around the world, on every continent except Antarctica. In Virginia, beds of eelgrass (Zostera marina) provided habitat for bay scallops and food for birds, and kept barrier islands from washing away. Eelgrass was so common that people who lived near the shore packed and baled it to use as insulation for homes, schools and hospitals.

In the 1930s, however, pandemic plant disease and repeated hurricanes eliminated the eelgrass along Virginia’s eastern shore. The once-vibrant seafloor became barren mud, leading to a loss of “wildfowl, the cream of salt-water fishing, most of the clams and crabs, and all of the bay scallops,” sportsman and publisher Eugene V. Connett wrote in 1947.

We are marine scientists who study seagrasses, marine biodiversity and coastal ecosystems. In a newly published study, we describe the results of a 20-year mission to reintroduce eelgrass into Virginia coastal bays using a novel seed-based approach.

This project has now restored 9,600 acres of seagrasses across four bays – one of the most successful marine restoration efforts anywhere in the world. It has triggered large increases in fishes and invertebrates, made the water clearer and trapped large quantities of carbon in seafloor sediments, helping to slow climate change. We see this work as a blueprint for restoring and maintaining healthy ecosystems along coastlines around the world.

Development, nutrient runoff and other human impacts have damaged marshes, mangroves, coral reefs and seagrasses in many bays and estuaries worldwide. Loss or shrinkage of these key habitats has reduced commercial fisheries, increased erosion, made coastlines more vulnerable to floods and storms and harmed many types of aquatic life. Rapid climate change has compounded these effects through rising global temperatures, more frequent and severe storms and ocean acidification.

In the late 1990s, local residents told two of us who are longtime students of seagrasses (Robert “JJ” Orth and Karen McGlathery) that they had spotted small patches of eelgrass in shallow waters off Virginia’s eastern shore. For years the conventional view had been that seagrasses in this area had not recovered from the events of the 1930s because human activities had made the area inhospitable for them.

But studies showed that water quality in these coastal bays was comparatively good. This led us to explore a different explanation: Seeds from healthy seagrass populations elsewhere along the Atlantic coast simply weren’t reaching these isolated bays. Seagrasses are underwater flowering plants, so seeds are among the main ways they reproduce and spread to new environments.

From our earlier research, we knew that when eelgrass seeds fall from the parent plant, they sink to the sea bottom quickly and don’t move far from where they land. We also knew that these seeds don’t germinate until late fall or early winter. This meant that if we collected the seeds in spring, when eelgrass flowers, we could hold them until the fall, helping them survive over the months in between.

We decided to try reseeding eelgrass in the areas where they were missing. Starting in 1999, we collected seeds by hand from underwater meadows in nearby Chesapeake Bay – plucking the long reproductive shoots, bringing them back to our laboratory and holding them in large outdoor seawater tanks until they released their seeds naturally. After about 10 years we started gathering the grasses using a custom-built underwater “lawn mower” to collect many more of the reproductive shoots than we could by hand.

In 2001 we sowed our first round by simply tossing seeds from a boat. Our first test plots covered 28 acres of mud flats in waters 2 to 3 feet deep. Returning the following year, we saw new seedlings sprouting up.

Each year since then, the Virginia Institute of Marine Science and the Nature Conservancy’s Virginia Coast Reserve, along with staff and students from the University of Virginia, have led a team of scientists and citizens to collect and seed a combined 536 acres of bare bottom in several coastal bays.

These initial plots took off and rapidly expanded. By 2020 they covered 9,600 acres across four bays. Several factors helped them flourish. These bays are naturally flushed with cool, clean water from the Atlantic Ocean. And they lie off the tip of Virginia’s eastern shore, where there is little coastal development.

Since eelgrass disappeared from these bays in the 1930s, human understanding of seagrass ecosystems has evolved. Today people don’t pack their walls full of seagrass insulation but instead value different services they provide, such as habitat for fish and shellfish – including many commercially and recreationally important species.

Scientists and government agencies also have recognized the importance of coastal systems in capturing and storing so-called “blue carbon.” In fact, we now know that seagrasses constitute a globally significant carbon sink. They are a key tool for reducing carbon dioxide in the atmosphere and slowing climate change

We are working to understand the valuable services that our restored seagrass beds provide. To our surprise, fish and invertebrates returned within only a few years as the meadows expanded. These organisms have established extensive food webs that include species ranging from tiny seahorses to 6-foot-long sandbar sharks.

Other benefits were equally dramatic. Water in the bays become clearer as the seagrass canopy trapped floating particles and deposited them onto the bottom, burying significant stocks of carbon and nitrogen in sediments bound by the grasses’ roots. Our research is the first to verify the overall net carbon captured by seagrass, and is now being used to issue carbon offset credits that in turn create more funds for restoration.

One big question was whether restoring seagrasses could make it possible to bring back bay scallops, which once generated millions of dollars for the local economy. Since bay scallops no longer existed in Virginia, we obtained broodstock from North Carolina, which we have reared and released annually since 2013. Regular surveys now reveal a growing population of bay scallops in the restored eelgrass, although there is still some way to go before they reach levels seen in the 1930s.

A Model for Coastal Restoration

Repairing damaged ecosystems is such an urgent mission worldwide that the United Nations has designated 2021-2030 as the U.N. Decade on Ecosystem Restoration. We see the success we have achieved with eelgrass restoration as a prime model for similar efforts in coastal areas around the world.

Our project focused not only on reviving this essential habitat, but also on charting how restoring seagrasses affected the ecosystem and on the co-restoration of bay scallops. It provides a road map for involving scholars, nonprofits organizations, citizens and government agencies in an ecological mission where they can see the results of their work.

Recent assessments show that the restored zone only covers about 30% of the total habitable bottom in our project area. With continued support, eelgrass – and the many benefits it provides – may continue to thrive and expand well into the 21st century.

Karen McGlathery is a Professor of Environmental Sciences and Director, Environmental Resilience Institute, University of Virginia.

Jonathan Lefcheck is supported by the Michael E. Tennenbaum Secretarial Scholar gift to the Smithsonian Institution.