Restoring Democracy in the Fight Against Fracking 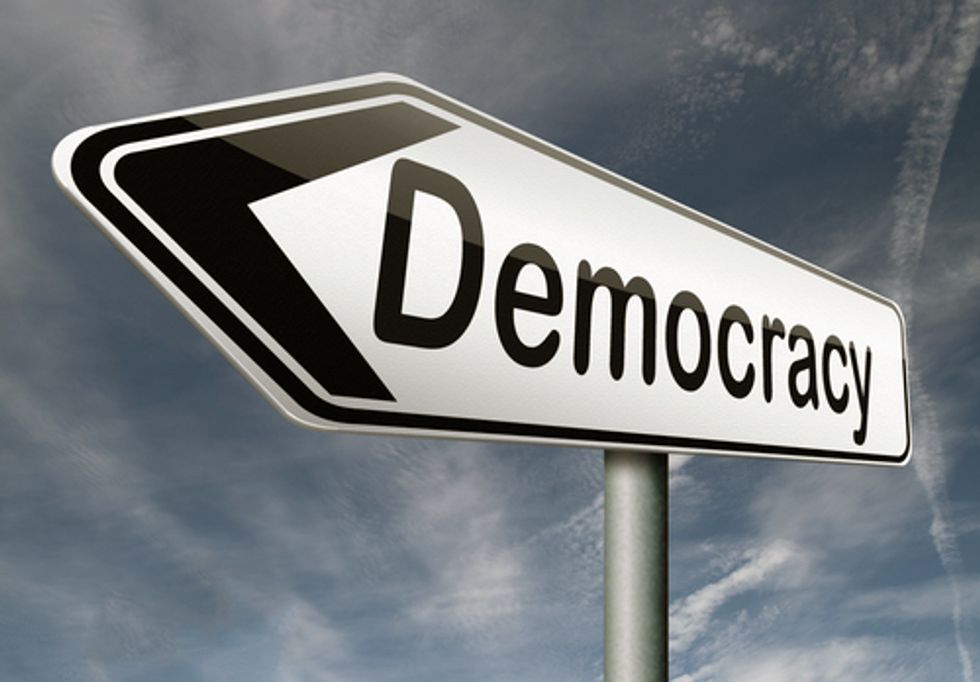 People are threatened by an activity that will injure them, and they work overtime to pass a law that bans the activity.

An affected corporation—or industry association—then sues the municipality, contending that the community can’t prohibit what the state allows, and that the ban violates the “rights” of the corporation.

Day after day, issue after issue, community after community, this machine has been humming along happily (for some) ever since the late 1800’s. All under a structure of law so perfectly constructed that very few understand how it actually works in practice.

Why the Corporations are Right

The law as it stands is pretty straightforward—communities are prohibited from banning what state government allows. That’s because our local municipal governments (the places where we live) have the status of “children” to the state “parent” under a legal theory called “Dillon’s Rule”—which means that state law, on issues deemed to be of statewide concern—legally overrides local laws. It means that communities can only do what the state legislature explicitly allows them to do.

All of which is privately enforceable by the corporations in any given industry—who can use these doctrines to haul our communities into court. It also means that by investing in the state legislature (a “right” protected under the 1st Amendment to the U.S. Constitution), corporations can curb the actions of all communities within the State in one swoop simply by using State legislature to preempt all communities at one time.

It, of course, gets worse—federal and state civil rights laws treat “discrimination” against a corporation exactly the same way that the laws treat “discrimination” against racial minorities. Consequently, a community attempting to stop a corporation from engaging in a harmful activity that the state has permitted is treated as odiously by the law as a community attempting to ban African-Americans. It works this way because the law treats both corporations and minority members as “persons” for purposes of civil rights laws.

Sometimes, you just can’t make this stuff up. Unfortunately for us, those doctrines have been the law of the land for well over a century.

How did we get to this place? Simple. Corporations—and the people who own and run them—have been very busy manufacturing a structure of law that insulates them from community control. They had a lot of help, of course—mostly in the form of our early constitution-drafters who made critical decisions that elevated property rights above democratic ones. That structure created fertile ground for the trading, energy, agribusiness and waste corporations who then wrapped themselves in constitutional law, while the rest of us struggled for long years trying to secure constitutional protections for ourselves—for women, African-Americans, native peoples, immigrants and gays.

Now we’re faced with a situation in which a corporate few possess greater legal and constitutional rights than community majorities.

Why do we almost never win against corporations targeting our communities? It’s because we focus solely on trying to convince other people how bad an activity is, and the need to ban it. Meanwhile, over at corporate headquarters, they’re laughing at us because they’ve patented the structure of law that is routinely used to preempt and nullify what we do.

In short, they know that they can always play the final card.

How do we get our heads out of our asses?

So how do we change the rules? Well, first we need to understand our own history, and that we’re not the first ones to be faced with a gameboard that has no places for our piece. We need to understand how prior movements—when faced with a system of law that didn’t recognize women or African-Americans as “people”—successfully changed the rules of the game. We can then appreciate why traditional liberal, progressive “pressure” politics have failed so miserably, and why the natural environment is in worse shape today than it was prior to the passage of the “seminal” regulatory laws that environmental groups trumpet.

Second, we need to figure out which doctrines—what parts of the structure of law itself—allow the corporation to do what it does; and what parts authorize our own State government to enable the corporations to do what they do. And then, we must use what we know to build a movement that dismantles that platform of law by collectively refusing to obey it.

Indeed, widespread disobedience is the only thing that’s ever been powerful enough to change unjust laws. While we tend to think of civil disobedience solely in terms of laying down in front of a bulldozer, we must create a higher form—one that collectively harnesses the power of our municipal governments to turn them against the corporations (and our own State governments) and the doctrines that empower them.

Simply put, we must occupy the law.

Ten thousand communities joining together to use their lawmaking powers to frontally and directly challenge the existence of those doctrines could ultimately liberate communities from the state-sanctioned rape that we’ve endured for over a century. That grassroots disobedience to the functioning of the law must then stitch itself together to drive state and federal constitutional change that unrings the bell.

If we don’t, we better get accustomed to living on our knees.

What’s happened in Longmont, Colorado is a perfect example of what activism looks like which fails to understand the tactical situation, and consequently, fails to directly challenge that platform of law.

While the original draft of Longmont’s “fracking” law contained everything necessary to mount a direct attack on preemption and corporate “rights,” the proposed amendment was then unceremoniously stripped of those provisions. They were deemed to be simply “too radical” by the drafters of the measure to be adopted by popular vote.

What could have the Longmont law looked like, if a different strategy had been pursued? Like the one created by the Pittsburgh City Council and now adopted by over a dozen other municipalities—which codified a community bill of rights recognizing peoples’ rights to clean air, pure water and a renewable energy future—and then banned gas drilling as a violation of those rights. The ordinance then stripped gas corporations in the City of the legal rights and powers that would otherwise be used to override the ordinance. The law also nullifies any State-issued permits that would allow fracking to proceed within the City.

Why? Because the overriding issue isn’t “fracking,” it is the denial of local self-government. By failing to address the latter, the focus on the former all but guarantees an organizing dead-end—the same dead-end that has been pursued by environmental and other groups for the past forty years.

Will they be overturned? Perhaps. But in many important ways, it doesn’t matter. While using our municipal governments to adopt local bills of rights is a novel approach, challenges to those laws inherently require the challenging corporation to validate each of the legal doctrines that allow them to override community lawmaking, and for a court to specifically uphold the application of each of those doctrines. In doing so, the process itself begins to reveal the otherwise-invisible apparatus which controls most aspects of our daily lives. The litigation thus becomes part of the organizing, rather than something best left just to the lawyers.

And it’s the very fact that the current machinery is invisible to so many people that allows it to function. Making it work in front of communities intimately affected by the corporate activity—with the eyes of the community on the legal system itself which then requires the injury to occur—will inevitably lead to a movement demanding structural change. It is that focus on structural change that will then take aim at driving changes to the state constitution that embed a right to community self-government at the highest levels. Communities in Pennsylvania, Washington, New Mexico and New Hampshire are now moving in that direction—building statewide organizations which grow stronger with each confrontation between resource corporations and municipalities.

Predictably, the Colorado Oil and Gas Association has sued Longmont using the same platform of law that corporations have been using against other communities for the last hundred years. Included in the lawsuit filed by the Association, on behalf of its member corporations, are claims of state preemption and violation of corporate “rights” that have been driven into both the state constitution and state law.

An opportunity has been lost to question (and openly challenge) the structure that provides the very basis of claimed corporate supremacy over Colorado communities. An opportunity has been lost to draw the parallels between fracking and the hundreds of other issues that communities face across the State—from water privatization and land development to the corporatization of agriculture.

An opportunity has been lost to make visible what has been so carefully camouflaged.

Movements build when opportunities are seized, not lost—when that which is hazy suddenly becomes clear. By framing the problem as “fracking,” and not as the corporate and governmental powers that force “fracking” on unwilling communities, it becomes easy for the gas corporations to divide, conquer, and then dissuade other communities from following.

It’s a revolt that never materializes.

It’s not too late for Longmont, of course. Both the State of Colorado and the corporate frackers, who will pile it on over the course of the next year, have drawn a bullseye around the people and natural environment of Longmont. As it all plays out, as it has a thousand times before in a thousand different places, let’s hope that a frontal challenge to the gas corporations—and the State government which has enabled and empowered them—isn’t far behind.

Thomas Linzey is an attorney and serves as the executive director of the Community Environmental Legal Defense Fund, a nonprofit, public interest law firm that has assisted more than 150 communities in eight states to adopt local laws that advance sustainability while challenging corporate and governmental powers.