Naomi Klein: No Is Not Enough 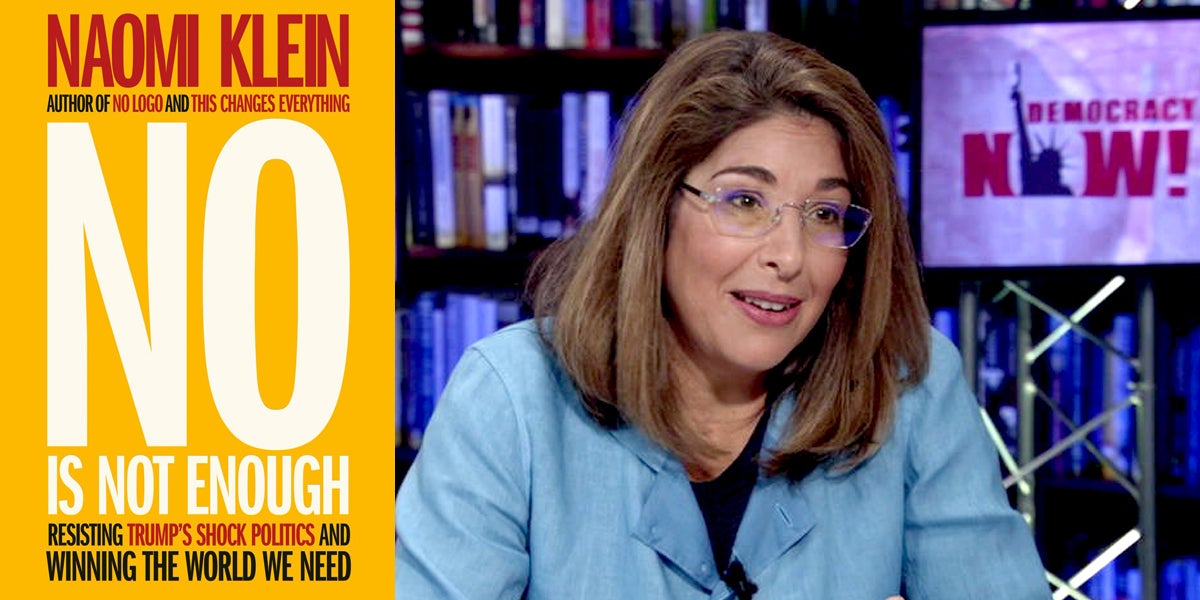 Shocking. Abnormal. Unprecedented. And, in the end, horror. These are just some of the words used to describe the Trump presidency since he took office. And with each passing day in the Trump administration, each new statement, tweet or piece of legislation, many people feel that these Trump-ian antics are unlike anything seen before.

But author and award-winning journalist Naomi Klein disagrees: We have seen this before.

Speaking to a crowded hall on June 12 at the Cooper Union in New York City, Klein discussed the events contributing to Trump’s rise, the future of the progressive movement and the “shocks” that are lying in the wake of Trump’s policies. The event was also held to promote Klein’s new book, No Is Not Enough: Resisting Trump’s Shock Politics and Winning the World We Need.

Much of Klein’s talk centered around the theory she presents in her 2008 book The Shock Doctrine, but she also differentiated Trump’s policies as a different form of shock. And while most media coverage of the White House portrays his administration as a chaotic mess, Klein argued that the media ends up missing the more diabolical policy movements behind the curtain that are “shock-creation machines”—such as the removal of Dodd-Frank and the pulling out from the Paris climate agreement.

“This narrative has emerged that he’s this bumbling idiot, that it’s all chaos,” she said. “And meanwhile, behind the scenes, getting very little media attention is a methodical, very organized redistribution of wealth from lower and middle incomes to the one percent of the one percent.”

The Rebranding of Trump—How We Got Here

In an analysis that has largely been missing in mainstream media to describe the rise of Trump, Klein connected much of Trump’s success to the way he brands himself. Drawing from common marketing practices, she discussed how Trump’s new business model involves the selling and leasing of his name to almost every product imaginable—a corporate model she calls the “hollow brand.” Klein’s analysis of hollow brand marketing builds upon her writing in her 1999 book, No Logo: Taking Aim at the Brand Bullies.

Beginning in the late 1980s, Klein pointed out, companies began to shift away from their traditional model of creating products and establishing a brand around those products. The new trend in the marketing industry was instead to sell an idea.

“The product is the marketing tool. Branding is a very colonial process,” she said. “And essentially what they’re selling is group identity.”

Trump, Klein argued, capitalizes on this marketing technique, as he built a brand centered on his name while quietly outsourcing the production of his products to Third World countries. Klein also took a moment to call out similar practices by Canadian president Justin Trudeau, who has branded himself as a “progressive climate leader” despite his anti-environmental policies in supporting tar sands pipelines.

“I’m a dual Canadian and American citizen, so I feel it’s my responsibility to tell you that Justin Trudeau is a hollow brand,” she said, to loud cheers from the audience.

The danger in this practice, however, lies in the facade that companies are actually fulfilling consumers’ needs.

“They’re not selling anything that meets the need,” Klein said. “They’re selling the promise of meeting the need, which is fantastic for capitalism.”

And while hollow branding inevitably upholds the capitalist system, Klein said marketing practice does reveal a human desire to be part of a larger movement. She cited Jeremy Corbyn and the Labour Party’s success following the recent UK election as evidence of a political movement employing marketing to build a base and generate excitement.

“People really like the idea of revolution,” she said. “Let’s give them the real thing.”

Bringing Together Social Movements—Where Do We Go From Here

While Klein’s prescient analysis of Trump may create the picture of a bleak future, she rounded out her talk with a call to action for more people to recognize the intersectionality between social movements as well as a revival of the anti-war movement.

“We live in a time where we cannot separate climate activism from anti-war activism,” Klein said. “We live in a time which really encourages us to sort of see these as separate issues, and I think our task is to explode all that and try to tell coherent stories about how all of our movements are interconnected.”

She said this intersectionality can be accomplished in a way that still recognizes the autonomy of these social issues in a spirit of solidarity.

“We’re stronger when we do this,” Klein said, referencing the droves of people who attended the People’s Climate March this spring and the Black Lives Matter movement.

The primary obstacle in the way of achieving this connectedness, however, is neoliberalism. She said there is need for institutions, such as left-wing universities, to provide an infrastructure for social movements.

“We don’t have a lot of spaces in which to come together,” Klein said.

Klein also emphasized the importance of not relying on “liberal billionaires” to save the people and provide all the solutions, and that people should not “wait to be led.” Instead, the rise of people’s platforms, such as the platform created by the Movement for Black Lives, places power in the hands of the people. Klein herself has participated in the formation of a people’s platform in Canada, where she helped create a people’s platform through theleap.org in the midst of a federal election.

Watch Naomi Klein talk about her new book, No Is Not Enough, on Democracy Now!: