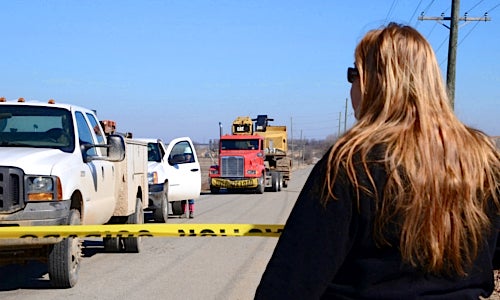 On March 13, a handful of local residents blocked a road through the forest in southern Illinois and attempted to prevent a contractor for Peabody Energy, the world’s largest coal company, from bringing in logging equipment to clear the area for a new 1,000-acre mine. 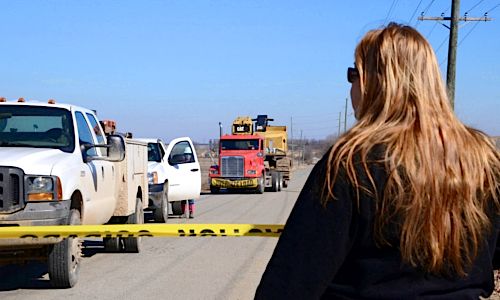 Opponents of the Rocky Branch strip mine in Illinois block logging equipment on a nearby road. Photo credit: Jeff Lucas /Creative commons

The Rocky Branch strip mine would basically be an extension of Peabody’s existing Cottage Grove mine, which produces about 2 million tons of coal annually and supplies Tennessee Valley Authority power plants in Ohio.

Logging had already started before the residents blocked the road; and continued during and since the blockade, which lasted for about four hours. Nonetheless, residents said they prevented some equipment from being moved and made a strong statement against the mine.

Residents opposed to the mine are demanding Illinois Attorney General Lisa Madigan intervene and review the permit process surrounding Rocky Branch, and order Peabody to halt its logging operations in the meantime.

The case may also represent a broader shift in attitude in a part of Illinois that has long acquiesced to the coal industry.

The Illinois Department of Natural Resources (IDNR) issued a mining and reclamation permit under the Surface Mine Control and Reclamation Act on March 11, and a third party contractor hired by Peabody started logging shortly after. But Peabody still has not obtained a required water discharge permit under the federal Clean Water Act, administered by the Illinois Environmental Protection Agency (EPA). Public comment for that permit closed March 19.

Opponents say the IDNR should not have given Peabody a green light while the water discharge permit was still pending; and they think the IDNR did not adequately consider environmental and other risks posed by the mine.

On March 19, a group of residents visited the Attorney General’s Carbondale office to voice their demand and deliver a petition hosted by the activist mobile phone company CREDO, with more than 5,000 signatures.

“If the nominal regulatory agency—in this case the IDNR—abdicates its responsibility, then it is the Attorney General’s responsibility to step in and make sure that the law is obeyed,” said Sam Stearns, a resident of surrounding Saline County. 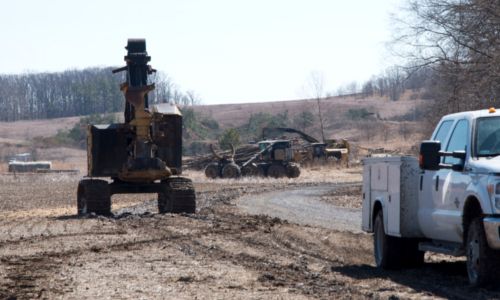 IDNR spokesman Chris Young said the EPA approval is not required in order for the IDNR to grant a permit, and he said the department “maintains an open line of communication with the Illinois Attorney General’s office on many issues.” He said the department had no further comments on the residents’ road block or complaints.

Natalie Bauer, a spokesperson for the Attorney General’s office, said staff met with residents in Carbondale “and collected the materials they provided. We’ll review them as a part of our larger review that is underway.”

Peabody spokesperson Charlene Murdock said the Rocky Branch mine would create 200 jobs, and that, “Peabody Energy has an outstanding reputation for environmental responsibility and we comply with all applicable requirements of state and federal permits.”

Murdock says the March 11 IDNR permit cleared the way for logging to begin, and, “There are no plans to begin mining prior to applicable permits being in place.”

She said the contractor told Peabody the road blockade caused “some delays offloading equipment at the site but no significant delays were experienced.” She said residents had their chance to express opinions at three public hearings on the IDNR permit, and that “Peabody Energy operates in a transparent manner. Our environmental compliance record speaks for itself and we often host regulatory agencies for tours at our mine sites.”

Regarding the call for Madigan to review the permit, she said, “Regulatory certainty is an important component of business planning and the State of Illinois has a long-standing process for granting mine permits which has served the state and industry well.”

‘We Join With You in Your Actions’

Attorney General Madigan and Gov. Quinn (D-IL) previously intervened to stop strip-mining in the nearby town of Banner, in part because of the possible impacts on bald eagles and white pelicans. In 2005 Quinn—who was lieutenant governor at the time—launched a petition drive and a “grassroots effort” to stop the mine. Madigan filed a complaint against that mine in 2009, after the IDNR had granted a permit. Saline County residents are asking Madigan to make a similar move regarding Rocky Branch.

“We join with you in your actions to stand up for your community. We know from past experience that it can be done successfully,” Fuller wrote, also advising the residents to try to delay the EPA water permit as long as possible. “The bottom line is, this is your community and you have every right to fight for it.”

The residents want to block the mine as a whole, and they also want to force Peabody to stop logging immediately. Young said the company is rushing to finish clearing the land to avoid a seasonal logging moratorium, beginning March 31 and running through October, to protect female or young endangered Indiana bats. 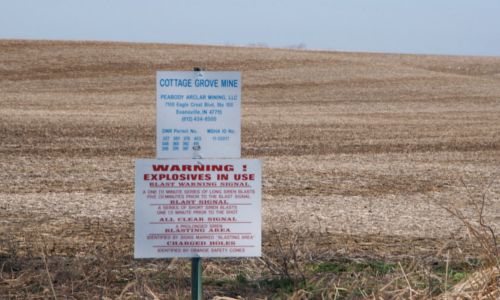 The proposed Rocky Branch strip mine would basically be an extension of Peabody’s existing Cottage Grove mine. Photo credit: Jeff Lucas /Creative commons

Southern Illinois was built on coal, and the region has seen a history of bloody clashes between miners and company officials and between competing miner factions over labor conditions and other issues. But while coal mining and coal power has sparked fierce resistance in other parts of the country, there’s historically been mostly support for the concept of mining coal in this neck of the woods.

Hence, residents say, the opposition to the Rocky Branch mine is historic.

“This is the first time in my life that I can remember a community in Southern Illinois standing up to Peabody over their destructive policies,” said Stearns. “I think Peabody is surprised at the resistance. I do not think they are concerned, however: they are used to literally and figuratively bulldozing our communities with impunity.”

That sense of impunity, as critics see it, was represented by Peabody’s decision to start logging the site in January before they had the IDNR permit. For that the IDNR cited subsidiary Peabody Arclar Mining LLC for violations involving surface mining without a permit. The violation notices stemmed in part from a recent federal policy change wherein logging a mine site now qualifies as pre-surface mining activity subject to permit requirements.

In issuing the permit on March 11, the IDNR mentioned the company’s violations, but said Peabody was taking steps to remedy them.

Meanwhile, neighbors are concerned the Rocky Branch mine would contaminate groundwater and do irreparable damage to the land, including lush woods not far from the Shawnee National Forest. The IDNR permit notes that about half the land is cropland, with several hundred acres made up of forest and pastureland. About two-thirds of the 1,000 acres would be strip-mined, while the remaining acres would host support infrastructure.

At a December public hearing on the IDNR permit, residents voiced much fear and anger over the proposal, saying it would be too much ecological change, especially on top of the Cottage Grove mine.

“We already have thousands of acres of once-productive farm land and formerly-healthy streams and forests which have been sacrificed forever to strip mining,” said Stearns, who is from a coal mining family and grew up believing coal was “the salvation of our region.”

“If the Rocky Branch area is strip mined, it will make the area unbearable for the current inhabitants; and it will ruin even more land forever,” he added. “The few jobs this proposed mine would create would last for just a few years, maybe a decade at most. There is no way those few short-term jobs are worth the damage it would do to the people and the land of Rocky Branch. My parents’ and grandparents’ generations did not realize the harm that coal causes. But today we can no longer plead ignorance.”