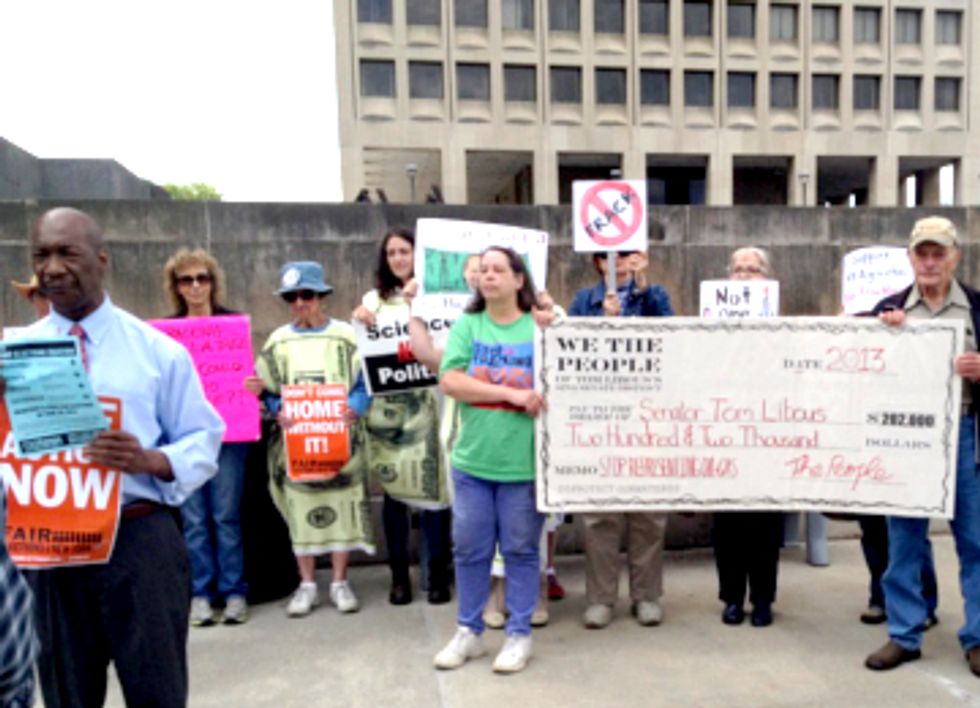 Residents of the Southern Tier in New York State deliver a check to Sen. Libous at his Binghamton district office today, "buying him back" from pro-fracking lobbyists.

The outrageous sum of contributions from pro-fracking interests is made worse by recent revelations that Sen. Libous has questionable personal ties to companies and relationships with individuals who stand to financially benefit significantly from fracking.

For years, Sen. Libous has been a staunch proponent of fracking, advocating for it in the legislature, in the press and speaking at gas industry sponsored rallies. He claims the Southern Tier overwhelmingly supports fracking, even as the polls show that is not the case. This year, Sen. Libous vowed to prevent a moratorium bill from coming to the Senate floor for a vote.

“Southern Tier residents are fed up with Sen. Libous being a puppet of the oil and gas industry," said Isaac Silberman-Gorn of Citizen Action New York. "Sen. Libous has long misrepresented his constituents on fracking in place of his own financial ties and outrageous campaign contributions from the oil and gas lobby. The fact is that a majority of Southern Tier residents don’t want fracking because the truth is that fracking threatens our health, our water, our air and our way of life.”

“It’s unconscionable that Sen. Libous not only acts the part of the oil and gas industry’s puppet but is also undermining the values of Democracy by preventing a vote on a fracking moratorium in the senate,” said Alex Harris of Democracy Matters. “Adding insult to injury, he opposes campaign finance reform which would prohibit our elected officials from being bought and sold like Sen. Libous is by the oil and gas industry.”

Residents delivered the eight by three foot check for $202,000.00 to Sen. Libous’ district office at 44 Hawley Street in Binghamton, NY.

“Sen. Libous has unquestionably espoused gas industry propaganda for years without giving the actual science and evidence about the harms caused by fracking a second thought," said Scott Lauffer of the Sierra Club. "The only thing Sen. Libous has represented on fracking is big oil and gas.”

Although the gas industry’s spokespeople and propaganda campaign assure the safety of fracking, New Yorkers are not buying it and remain opposed to fracking, while the truth is coming out that fracking is far from safe and that the gas industry cannot be trusted. A recent investigation by the Times Tribune in Pennsylvania revealed many cases of water contamination from fracking.