Residential Water Well Fails in Michigan After Fracking Begins Nearby 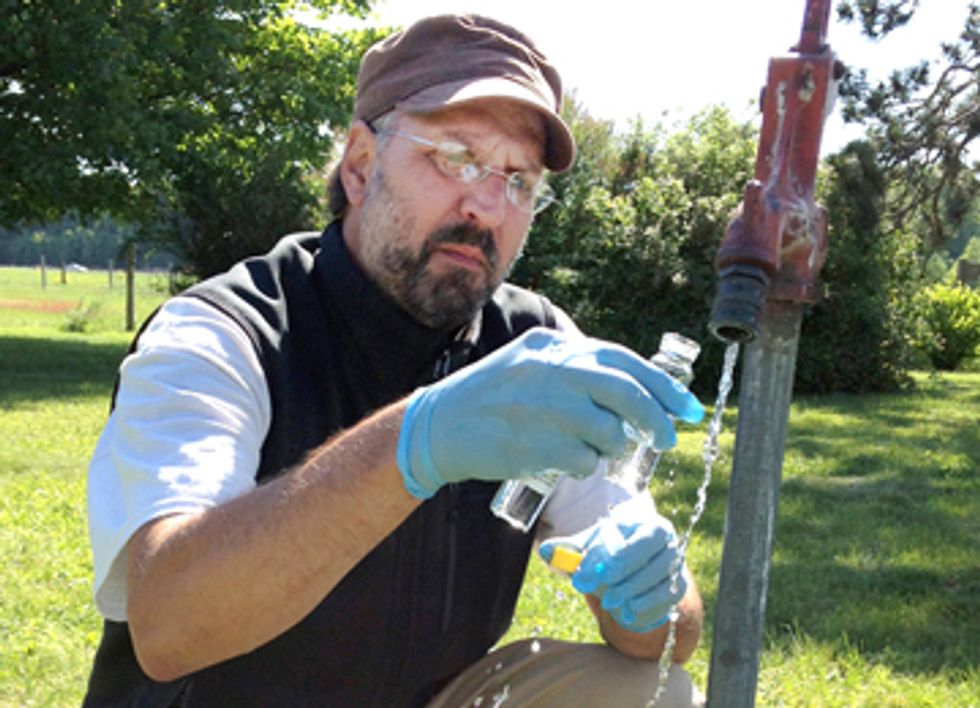 Friends of the Au Gres-Rifle Watershed

As Encana’s fracking operation continues in Rapid River Township, local residents are losing water pressure and water coming out of the tap looks like milk.

Last week, fracking operations at the Westerman 1-29 HD1 continued, despite ongoing issues with the water supply on the pad. The additional water wells installed on and off the well pad failed to yield sufficient volumes to complete the well and Encana continued to obtain water from the Kalkaska Village municipal system until June 8, when the gas well was finally completed.

At some point mid-week, Bernard and Phyllis Senske, who live adjacent to the well site, started experiencing a drop in water pressure and discolored water.

“It looks like milk coming out of the faucet,” said Mrs. Senske.

In response to her distress, the Anglers of the AuSable, a group dedicated to protection of Au Sable and other Michigan trout streams, engaged Dr. Chris Grobbel, of Grobbel Environmental & Planning Associates, to inspect the well and sample the water.

His initial report, which can be viewed below, found that “the static water level within the Senske well has been lowered by 11 feet. Homeowners Senskes reported that this problem is coincident with the nearby fracking operation which is also reportedly experiencing difficulties pumping groundwater to supply on-site fracking operation.”

This is not the first fracking operation to experience issues with insufficient water. Attempts to complete the Yonkman 1-29HD1 well in Missaukee County between December 2012 and February of this year were unsuccessful, despite construction of eight water wells in an effort to do so. Devon Energy approached nearby municipalities for water, and the City of McBain agreed—for $34,000.00. However, the Michigan Department of Environmental Quality (MDEQ) records illustrate that the Yonkman well was never completed.

Similar issues were also experienced at the State Richfield 1-27 well in Roscommon County, where four water wells failed to provide the quantity of water required to frack the well (4.8 million gallons), and two additional wells were required.

Dr. Grobbel recommends a pump aquifer yield test be performed to determine whether an aquifer can safely supply the volume of water required for any large quantity water withdrawal, so that adverse impact to groundwater can be properly assessed and avoided.

Dr. Grobbel summarized his observations in the following report:

Please find this summary of my 6/7/13 site visit to the home of Bernard and Phyllis Senske, 632 Wood Rd, Rapid River Township, Kalkaska County. The Senske property is along the north side of Wood Rd, in close proximity to and northeast of Chevron’s Westerman 1-32 HD-1 deep horizontal, hydraulically fractured natural gas well—currently being fracked by Halliburton.

The Senskes’ reported and I observed the diminishment of flow, once turned on, from a hydrant at their residential well north of their home. Using an electronic static water level meter, I determined the depth of the well at 175 feet below ground surface (BGS), static water level at 129 feet BGS, giving them a total of 46 feet of water within their well. According to records from submersible well pump replacement in August 10, 2010 indicated the well had a static water level at 118 feet BGS (i.e. 57 feet of water within the well), and that the pump was set at 133 feet BGS (i.e. 15 feet into the aquifer). Under the conditions I observed on 6/7/13, the submersible pump would be a mere 4 feet into the aquifer and is running periodically dry through drawdown when run. Turning the well off, the water table seems to recover relatively quickly to 129 feet BGS. Consequently, the water well system is drawing air and water and slugs of air were observed by myself at the hydrant and at a tap within the Senske home. The cloudy water observed from the tap is likely air saturation within drinking water, and the clearing of drawn water was observed after a few seconds as very fine air bubbles volatilized. It was also noted that a small amount of white scale was present in drinking water within the Senske home, likely calcium deposits/scale being loosened and flushed through the home’s plumbing from the air “shocking” of the system from drawing air. Neither condition are judged to represent health concern for the home owners.

However, to ensure the Senske’s water was not tainted, I developed the well by running it for 15 minutes and analyzed the head space of water sample collected within a sterile lab jar with a photo-ionization unit (PID). PID readings were non-detect, and I did not detect odors of any sort. Samples were collected within 40 ml of volatile organic analysis per MDEQ protocols for drinking water, and were submitted to a MDEQ licensed lab in Traverse City for analysis for BTEX (benzene, toluene, ethylbenzene and xylene isomers U.S. EPA Method 8020)—a common indicator of petroleum constituents. I expect results during the week of June 17.

In short, it appears that the static water level within the Senske well has been lowered by 11 feet. Homeowners Senskes reported that this problem is coincident with the nearby fracking operation which is also reportedly experiencing difficulties pumping groundwater to supply on-site fracking operations. The Senskes are long-term occupants of this home, Mrs. Senske having been born there about 80 years ago and moved back decades ago. Both Mr. and Mrs. Senske reported that no problems have existed within water quality or quantity in this water well, which installed approximately in the early 1990s and used of potable water and irrigation on their farmstead. The only obvious change in the vicinity is the nearby horizontal fracking operation.