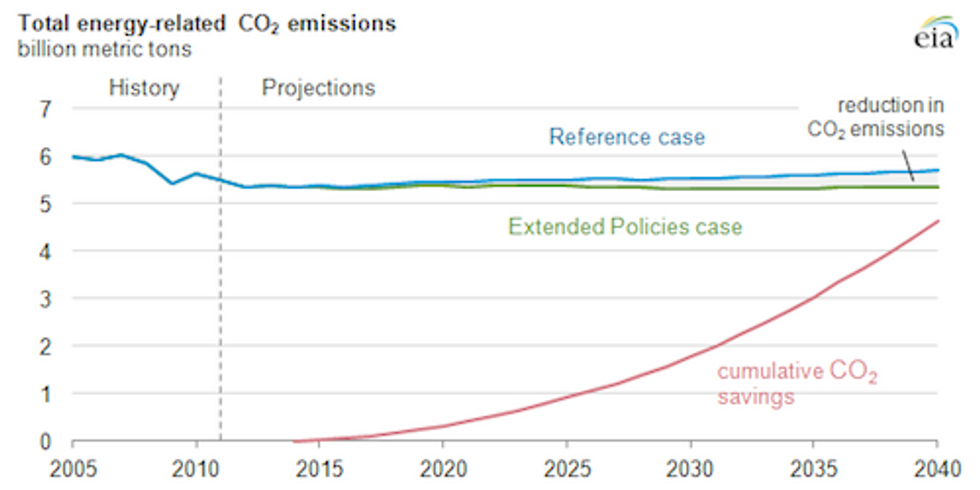 Projected emissions reductions result from decreased energy consumption as well as additional energy production from low-carbon resources. In 2040, the extended policies case projects 4 quadrillion Btu lower annual U.S. energy consumption than the reference case. The cumulative amount of energy use is 55 quadrillion Btu lower between 2013 and 2040.

The extended policies case differs from the reference case, which generally reflects policies as they exist in spring 2013, including the assumption that any sunset dates (for example, scheduled expirations for tax credits) or other scheduled milestones occur as specified in law. In the extended policies case, EIA explores the possible effects of the indefinite continuation of certain provisions that have expiration dates and the expansion of certain energy laws and regulations.

The continuation of the production tax credit for wind, biomass, geothermal and other renewable resources and the investment tax credit for solar generation technologies exemplify the policy extensions included in this case.

For a discussion of assumptions and results, see the full Issues in Focus article on the No Sunset and Extended Policy cases in AEO2013. The full article also features a discussion of a special case investigating the effects of the American Taxpayer Relief Act of 2012 passed by Congress on Jan. 1, 2013.