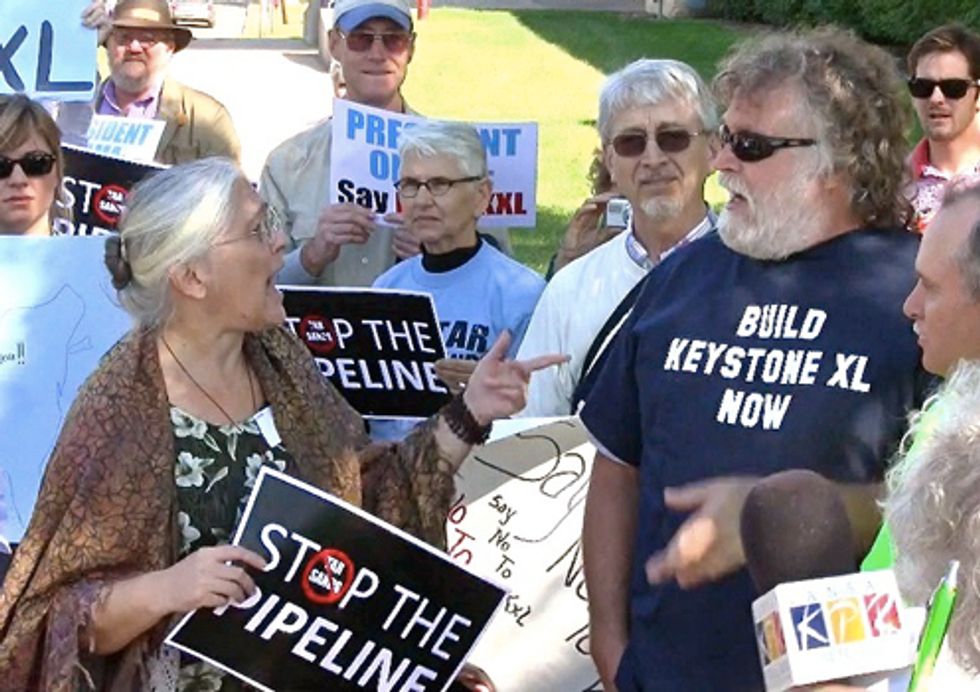 Sen. Hoeven’s bill, that would seek to take control of the Keystone decision, looks like a political non-starter. To become law it would have to be approved by the Democratic-controlled Senate.

And for some crazy reason, if this does happen, the president himself would still have to approve it.

But still Hoeven is pushing ahead. “We’ve been working with (the Republican) leadership in the Senate and all our colleagues, and we believe Sen. Hoeven’s bill has support from a lot of people in the Senate,” said Ryan Bernstein, an energy advisor to Hoeven.

One of the main reasons the pipeline is rapidly becoming a key election issue is over jobs. The oil industry and its friends in the GOP maintain that the pipeline is a huge job creator, but the pipeline’s critics have always maintained that those figures are highly inflated and misleading.

And now Greenpeace has upped the game in this department and written to the Chairman of the U.S. Securities and Exchange Commission (SEC) alleging that TransCanada “is using false or misleading statements about the proposed Keystone XL pipeline project," especially in relation to the numbers of jobs the pipeline would create.

The letter argues that TransCanada has “has consistently used public statements and information it knows are false in a concerted effort to secure permitting approval of Keystone XL from the U.S. government. In the process, it has misled investors, U.S. and Canadian officials, the media, and the public at large in order to bolster its balance sheets and share price.”

Greenpeace is arguing that TransCanada’s statements violate U.S. securities disclosure laws. The environmental group maintains that TransCanada has asserted that each mile of the pipeline constructed in the U.S. would create American jobs at a rate that is 67 times higher than job creation totals given by the company to Canadian officials for the Canadian portion of the pipeline.

“These false and misleading job creation numbers are part of TransCanada’s lobbying and public relations campaign designed to create congressional pressure on the U.S. government to issue a Presidential Permit approving construction of Keystone XL," argues Greenpeace, which has asked the SEC to make TransCanada correct its figures.

At the heart of the jobs propaganda is a report commissioned by TransCanada from economist Ray Perryman, entitled The Impact of Developing the Keystone XL Pipeline Project on Business Activity in the U.S. Based on Perryman’s report, TransCanada has claimed that the pipeline would create more than 20,000 high-wage manufacturing jobs and construction jobs in 2011-2012 and more than 118,000 “spin-off” jobs.

But Greenpeace argues these “claims are false and in conflict” with TransCanada’s own filings to Canadian and U.S. regulators, and is exaggerated by possibly more than 350 percent.

The Greenpeace letter concludes that it is “clear that TransCanada has consistently used public statements and information it knows are false in a concerted effort to secure permitting approval of KXL from the U.S. government. In the process, it has misled a large number of people—investors, U.S. and Canadian officials, state officials, the media, and the public at large—in order to bolster its balance sheets and share price. This is a direct violation of SEC public disclosure regulations and must be addressed.”

Greenpeace and many others will be watching closely to see how the SEC responds.