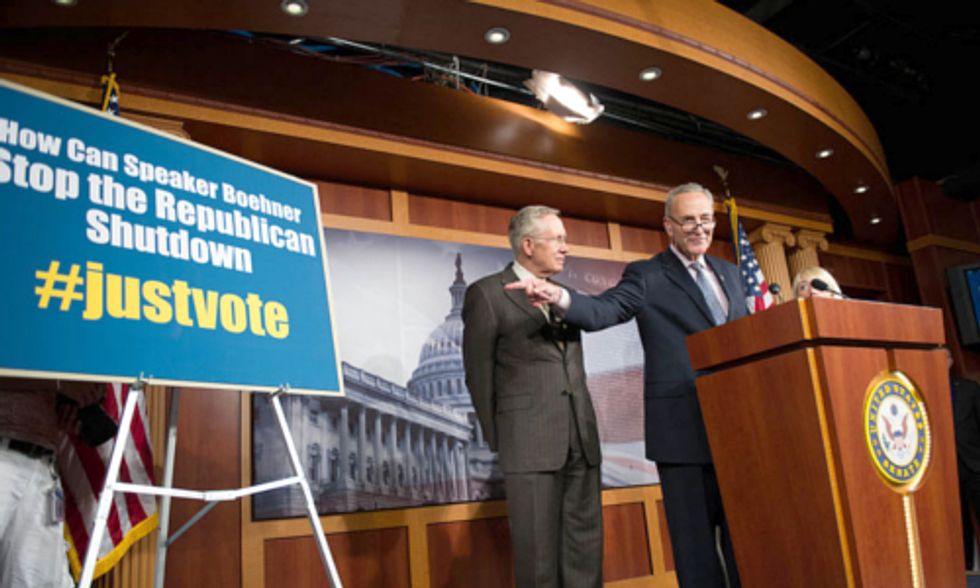 Republican leaders in the Senate took America one step closer to another government shutdown this week, foreshadowing a possible replay at the end of September. Instead of voting on straightforward bills to fund government operations, GOP lawmakers held the appropriation bills hostage with unrelated amendments. These riders would block the U.S. Environmental Protection Agency (EPA) from addressing climate change and keeping pollution out of our water.

The Republican Party is bending over backward to politicize what has historically been a routine process. Making sure the government has the funds to function is one of the most basic responsibilities of Congress. Yet in recent years, Republican lawmakers have hijacked this process to score ideological points and take aim at popular public health and environmental protections.

This fervor drove them to shutdown the government for three weeks last year. Parks were barricaded, workers were furloughed and our economy took a $24 billion hit. The GOP, meanwhile, got a beating in the court of public opinion.

You would think they’d learn from that fiasco, but they are at it again. Now they are saying they will only uphold their Congressional responsibility if Americans accept dirtier air, polluted waters and unchecked climate change.

That deal would endanger our families’ health and our economy. And it’s not what people want.

Access to safe, clean water tops is always at the top of the list for Americans’ environmental priorities. Poll after poll has also confirmed strong support for tackling climate change. A recent NBC News/Wall Street Journal poll, for instance, found that 67 percent of Americans favor the EPA’s Clean Power Plan to reduce carbon pollution from power plants. A full 57 percent support it even if it raises utilities bills—which the Natural Resources Defense Council has shown is unlikely.

Republican voters are among those who back the EPA’s climate action. Fifty-three percent of Republicans—and 63 percent of Independents and 87 percent of Democrats—in 11 battleground states agree the EPA should limit carbon pollution from power plants, according to a March poll by Harstad Strategic Research for the NRDC Action Fund.

And this week, four former EPA administrators—all appointed by Republican presidents—testified before Congress that the time for climate action is now.

The EPA’s plan for reducing carbon pollution would get America moving forward. It is a flexible, common-sense way for America to address the climate crisis. Even if GOP lawmakers don’t agree with every aspect of it, they should come to the table to discuss it. They shouldn’t bog down vitally important and totally unrelated spending bills with their policy differences.

Most Americans want to Congress to keep the government functioning and to keep our air and water clean. GOP lawmakers should give the people what they want and start working together to build a cleaner, safer future for all Americans.