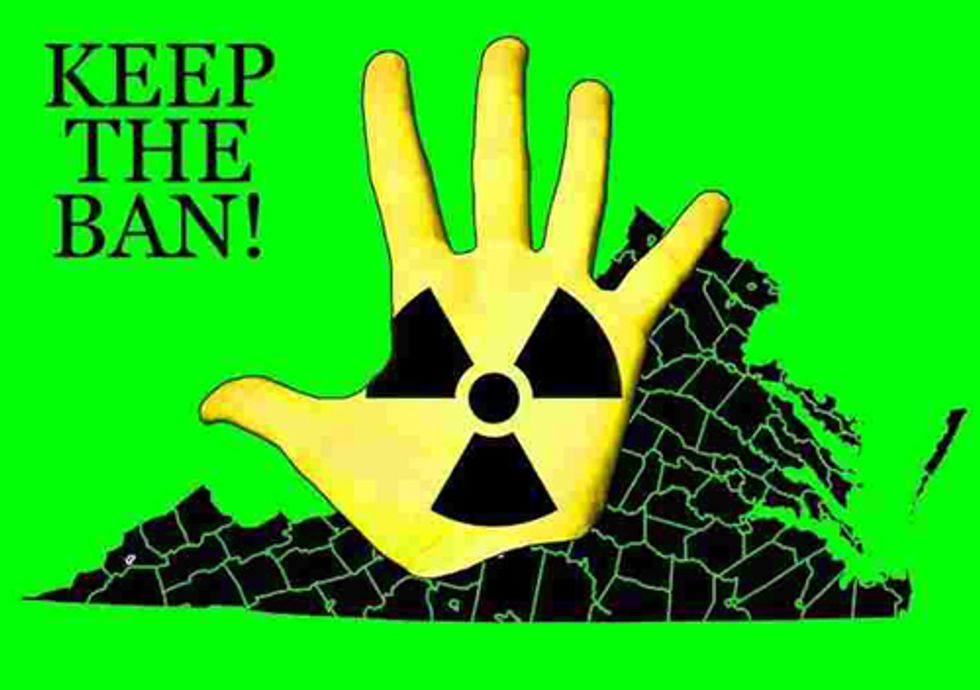 The long-awaited report issued by the National Academy of Sciences (NAS) Dec. 19 echoes numerous pitfalls with potential uranium mining, milling and waste disposal in the Commonwealth that many concerned Virginians have expressed in past months.

The 300-page report was commissioned by the Virginia Coal and Energy Commission and is part of an ongoing contract between the commission and NAS that includes a public outreach and public meeting period over the next five months. The report does not make any recommendations about whether Virginia should or should not allow uranium mining, but raises significant environmental and public health concerns.

State law has maintained a nearly 30-year ban on uranium mining. Virginia Uranium, Inc., which wants to establish a uranium mine, mill, and waste disposal site in Pittsylvania County, is pushing the General Assembly to lift the ban in 2012, beginning with the drafting of regulations.

"This is a huge validation for many of the core concerns that we have been raising," said Cale Jaffe, senior attorney with the Southern Environmental Law Center. "As the report highlights, a uranium mine or processing facility could be subject to an uncontrolled release as a result of flood, hurricane or earthquake. In Virginia, we've experienced all of those extreme events just this year."

"The report highlights the difficulty of storing radioactive waste for thousands of years, given Virginia's climate, geology and population density," said Dan Holmes, director of State Policy for the Piedmont Environmental Council. "We are now more convinced that this would be a dangerous experiment in Virginia."

Among the cautionary points found by the NAS study committee:

A Huge Risk - According to the National Academy of Sciences—"Furthermore, Virginia is subject to relatively frequent storms that produce intense rainfall. It is questionable whether currently-engineered tailings repositories could be expected to prevent erosion and surface and groundwater contamination for as long as 1,000 years. Natural events such as hurricanes, earthquakes, intense rainfall, or drought could lead to the release of contaminants if facilities are not designed and constructed to withstand such events, or if they fail to perform as designed."

Severe Contamination Risks Exist—"Moreover, in a hydrologically active environment such as Virginia, with relatively frequent tropical and convective storms producing intense rainfall, it is questionable whether currently-engineered tailings repositories could be expected to prevent erosion and surface and groundwater contamination for 1,000 years. There are many reports in the literature of releases from improperly disposed tailings and their environmental effects."

A High Stakes Gamble—"A mine or processing facility could also be subject to uncontrolled releases of radioactive materials as a result of human error or an extreme event such as a flood, fire, or earthquake."

Adverse Impacts for Southside Agriculture—"Exposure could also occur from the release of contaminated water, or by leaching of radioactive materials into surface or groundwater from uranium tailings or other waste materials, where they could eventually end up in drinking water supplies or could accumulate in the food chain, eventually ending up in the meat, fish, or milk produced in the area."

A High Stakes Gamble—"Uranium tailings present a significant potential source of radioactive contamination for thousands of years ... because monitoring of tailings management sites has only been carried out for a short period, monitoring data are insufficient to assess the long-term effectiveness of tailings management facilities designed and constructed according to modern best practices."

Current U.S. Regulations are Insufficient—"The United States federal government has only limited recent experience regulating conventional uranium processing and reclamation of uranium mining and processing facilities. Because almost all uranium mining and processing to date has taken place in parts of the United States that have a negative water balance (dry climates with low rainfall), federal agencies have limited experience applying laws and regulations in positive water balance (wet climates with medium to high rainfall) situations."

Current U.S. Regulations are Insufficient—"The United States' federal government has only limited experience regulating conventional uranium mining, processing, and reclamation over the past two decades, with little new open pit and under-ground uranium mining activity in the United States since the late 1980s."

Unique Risks for Virginia—"In the recent past, most uranium mining and processing has taken place in parts of the United States that have a negative water balance (dry climates with low rainfall), and consequently federal agencies have little experience developing and applying laws and regulations in locations with abundant rainfall and groundwater, and a positive water balance (wet climates with medium to high rainfall), such as Virginia."

Public Process—"However, under the current regulatory structure, opportunities for meaningful public involvement are fragmented and limited."

Water Quality Impacts—"Disturbances of the land surface associated with uranium mining in Virginia would be expected to have significant effects on both on-site and downstream surface water conditions. These disturbances affect both surface water quantity and quality."