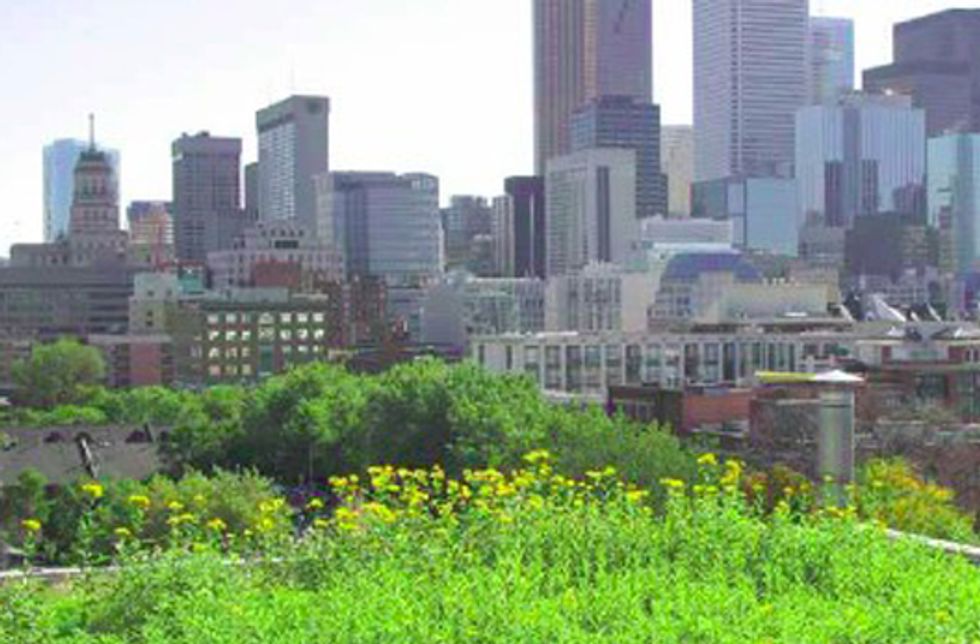 The Natural Resources Defense Council (NRDC) released a new report called Rooftops to Rivers II: Green Strategies for Controlling Stormwater and Combined Sewer Overflows. The report discusses the considerable problems that stormwater runoff, which carries pollution to our rivers, lakes and beaches and causes sewage system overflows, poses for our communities, and ways that cities are using green infrastructure practices to clean up their waters, literally greening their cityscapes in the process.

My colleagues David Beckman, Jon Devine and Rebecca Hammer have pointed out that green infrastructure is a simple and powerful solution to water pollution that makes cities function, from a water perspective, more like the natural landscape by reducing the amount of hardened, paved surfaces that generate rainfall runoff; that cities that use green infrastructure practices to capture rain where it falls have improved their ability to manage stormwater and reduce runoff pollution while saving money and beautifying neighborhoods at the same time—success stories that should encourage the U.S. Environmental Protection Agency (EPA) and local officials to adopt policies to drive similar approaches and outcomes nationwide; and, provided specific examples of initiatives cities are taking to stop flooding, reduce pollution and use green infrastructure practices to take on their own unique water management challenges.  Overall, Rooftops to Rivers II profiles the approaches taken by 14 cities in the U.S. and Canada (as well as provides examples from several others), revealing just how far the use of green infrastructure has spread and just how adaptable it is to different regions and climates, to changes in geography and geology, and to the various issues faced by each city.  Green infrastructure works everywhere.

For example, Pittsburgh, whose metropolitan area’s 4,000 miles of sewer pipes and 450 combined and separate sewer overflow structures release 22 billion gallons of untreated municipal waste into surrounding waters every year, has enacted a stormwater ordinance that requires development sites larger than 10,000 square feet in size to retain the first one-inch of rainfall from any storm event on-site, using practices that infiltrate, evapotranspirate with plants, or capture and re-use the rain.  Publicly funded projects are required to retain 1.5 inches of rainfall on-site. The city has also begun a “Green Up Pittsburgh” initiative that offers support for community greening efforts.  The effort has led to more than 120 vacant city lots being transformed into functioning green spaces, removing blight and safety hazards, inspiring community pride and providing environmental benefits.

Toronto stands out for its investment in and long-term vision for green infrastructure to clean up and protect Lake Ontario, which was listed as an “Area of Concern” in a 1972 agreement between the U.S. and Canada.  In 2003 Toronto adopted its Wet Weather Flow Master Plan, a 25-year, $1 billion comprehensive strategy to use both traditional and green infrastructure to eliminate the adverse impacts of stormwater runoff.  Both separately and under the plan, Toronto has taken a multitude of steps to incorporate green infrastructure into city planning and development, including:

And Kansas City, M0., which created a stormwater utility in 1999 that assesses fees based on the size of a property’s impervious, or runoff generating surface area, has recently broken ground on a 100-acre pilot project that represents the largest focused installation of green infrastructure as the sole control for combined sewer overflows in the nation.  The Middle Blue River Basin Pilot Project, located in the city’s Marlborough neighborhood, will potentially save the city $10 million in capital costs relative to what would have been spent if only traditional stormwater infrastructure was used.

Dozens of other cities across the country have begun incorporating green infrastructure in a similar manner:

Green infrastructure works.  It works everywhere.  And it provides benefits that extend well beyond water quality.  As these, and other cities profiled in Rooftops to Rivers II demonstrate, there’s a wide array of approaches, practices, and ultimately, solutions to the problems caused by stormwater runoff that green infrastructure can provide.  And if your community hasn’t embraced the practice yet, then Rooftops to Rivers II provides plenty of examples for how green infrastructure can be used in your city, and how it can help clean up waters while saving your city money and creating a greener, healthier landscape.