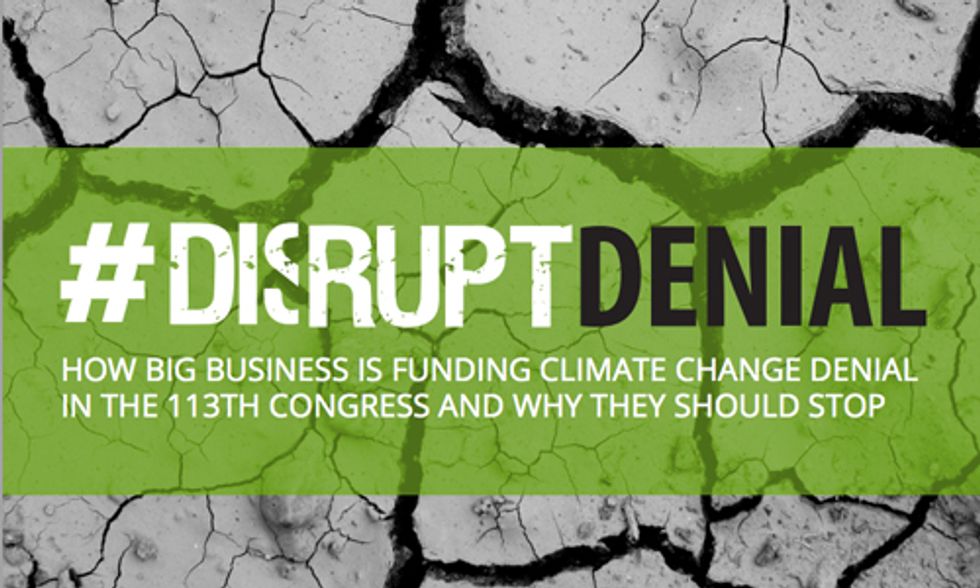 Many large corporations like to present a green public face, embracing the image of a good environmental steward.

But a report released today by Forecast the Facts Action and SumOfUs.org, "#DisruptDenial: How big business is funding climate change denial in the 113th Congress and why they should stop," shows that those companies—including Google, Ford, Microsoft, UPS and eBay—are the source of lavish donations to members of Congress who deny the reality of manmade, pollution-caused climate change. It's the first report to document contributions to congressional climate deniers.

Not that it's hard to throw a donation and hit a member of Congress who doesn't accept the reality of climate change. More than 160 members of the current Congress have expressed skepticism about manmade climate change, including more than 55 percent of the Republican delegation. There are no Democratic climate deniers on the list assembled by Think Progress.

According to the report, climate change deniers have received more than $641 million in campaign contributions from U.S. businesses and their employees since 2008, with 90 percent coming from sources outside the fossil fuel industry. UPS has donated nearly $2 million, while Microsoft has kicked in $1.07 million. Other million-plus donors include AT&T, Bank of America, Boeing, Citigroup, Ernst & Young, Goldman Sachs, Pfizer, Pricewaterhouse & Coopers, WalMart, Verizon and Wells Fargo, all of whom have publicly embraced the reality of climate change, environmentally responsible policies and the need to reduce emissions.

“Companies that have commitments on climate change, from cleaning up their own operations to supporting governmental action, are undermining their promises by funding a climate change denying caucus in Congress," said Forecast the Facts Action campaign director Brant Olson. "We are calling on these companies to stop funding climate change denying politicians so that we can move closer to solving the climate crisis.”

“The willingness of wealthy contributors to supply funding for climate change denial, and the eagerness of Senators and House Representatives in both parties to receive that funding, has corrupted responsible, effective governance, motivating elected officials to respond to the wishes of financial backers, as opposed to the needs of their constituents,” said SumOfUs.org campaign director Paul Ferris.

Forecast the Facts Action is asking companies who have made commitments to operating in a more sustainable manner to stop giving campaign contributions to climate deniers. So far, none have agreed to do so.