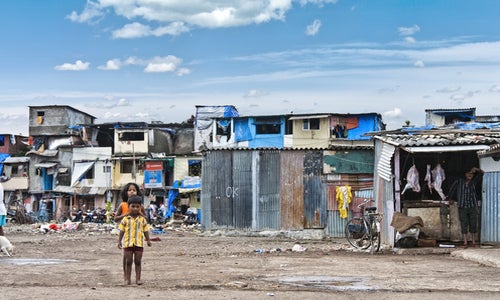 As the end of coal continues to loom larger on the horizon, a new report from the Institute for Energy Economics and Financial Analysis (IEEFA) has blown trench-sized holes in the industry’s latest attempt to talk up its future, dismissing the myth of coal alleviating poverty in the developing world. 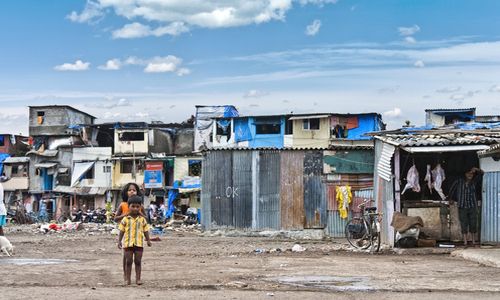 The report makes it clear that renewable energy projects are far better investments for developing nations. Children play in front of slum housing in Mumbai, India in 2008.

The report uses in-depth financial modelling to evaluate the possibility of India becoming the next big coal import market, and demonstrates that the economics do not stack up.

It warns that as demand in China slows, the market in India is not going to grow and pick up the slack as the industry hopes, adding to the gloom unfolding over the future of major coal projects being developed in Australia, two of them by Indian companies.

The industry’s economic models are flawed, the world’s poor won’t be helped, and the demand that is used to justify ruining Australia’s natural wonders is an illusion. Savvy operators are increasingly avoiding the Galilee. The report found that imported coal would need to be priced at double the wholesale price of India’s electricity, which categorically discredits the nonsense arguments that it might alleviate India’s energy poverty.

The U.S.-based Peabody coal’s “advanced energy for life” PR offensive has been enthusiastically taken up by the Australian mining industry.

The industry is pushing itself as a means of poverty alleviation simply because it thinks it is a convincing argument, but in reality it makes little sense to pursue coal given renewables are starting out cheaper.

When these companies talk about reducing poverty, what they are actually talking about is doubling the price of electricity for India’s poor. India cannot afford to burn Australian coal in its plants.

The need of the hour therefore is a decentralized, democratically owned renewable energy deployment to fight energy poverty. Glimpses of its success and reliability are already being felt across the world. Decentralized renewable energy is a safer, cleaner and viable source of energy for the rapidly evolving societies of the coming decades.

The new report makes the case that renewables are far better for developing nations as they are already cost competitive with coal, will get cheaper over time, can be built faster, do not impact public health, and require no on-going fuel costs.

The cost of electricity generation from solar power in India has fallen 65 percent in the last three years alone, while average coal prices are projected to escalate by four percent a year in rupee terms due to the cost of fuel.

Coal is bad for the climate, bad for public health, and bad for business; and it will entrench, not alleviate, poverty in the developing world.