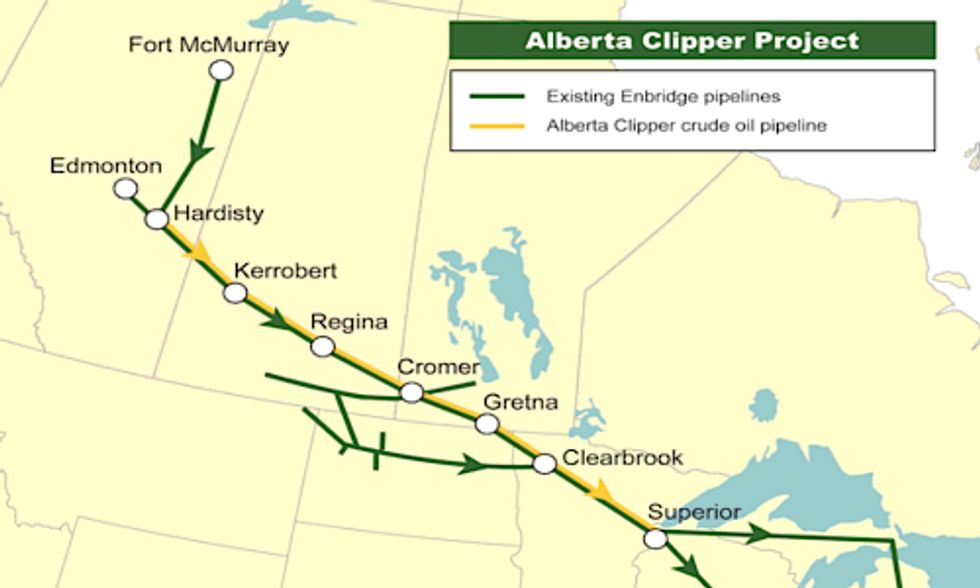 A new report released today by the Sierra Club and a coalition of 13 other organizations, including the Indigenous Environmental Network, examines the proposed expansion of the Alberta Clipper tar sands pipeline and concludes that there are significant threats to water, health and climate.

The report, All Risk, No Reward: The Alberta Clipper Tar Sands Pipeline Expansion, comes in advance of a rally to stop the Alberta Clipper expansion that will take place before the Minnesota Public Utilities Commission public hearing in St. Paul, MN, on April 3.

The Alberta Clipper pipeline, also known as Line 67, currently pumps up to 450,000 barrels per day of tar sands crude from Hardisty, Alberta, Canada, to Superior, WI. The pipeline traverses 327 miles through North Dakota and Minnesota to Wisconsin and the shores of Lake Superior, passing through Tribal lands, forests, farms, rivers and lakes. Enbridge, the company that owns the pipeline, seeks to almost double the pipeline’s capacity to 800,000 bpd, nearly the same as TransCanada’s controversial Keystone XL pipeline; and to construct two new tar sands storage tanks on the shores of Lake Superior.

“Higher capacity means more crude pumped at higher temperature and pressure, raising the risk of accidents,” says Sarah Milne, report author. “This proposal would also enable tar sands industry growth, generating massive carbon pollution at a time when both the U.S. and Canada must transition away from dirty fuels and to renewable energy.”

“Enbridge has a disgraceful history of spills and has been cited for safety violations by U.S. and Canadian public safety agencies,” says Milne. “From 1999 to 2010, Enbridge was responsible for more than 800 spills that released 6.8 million gallons of hydrocarbons, including the worst onshore oil spill in U.S. history, the 2010 Kalamazoo River disaster.”