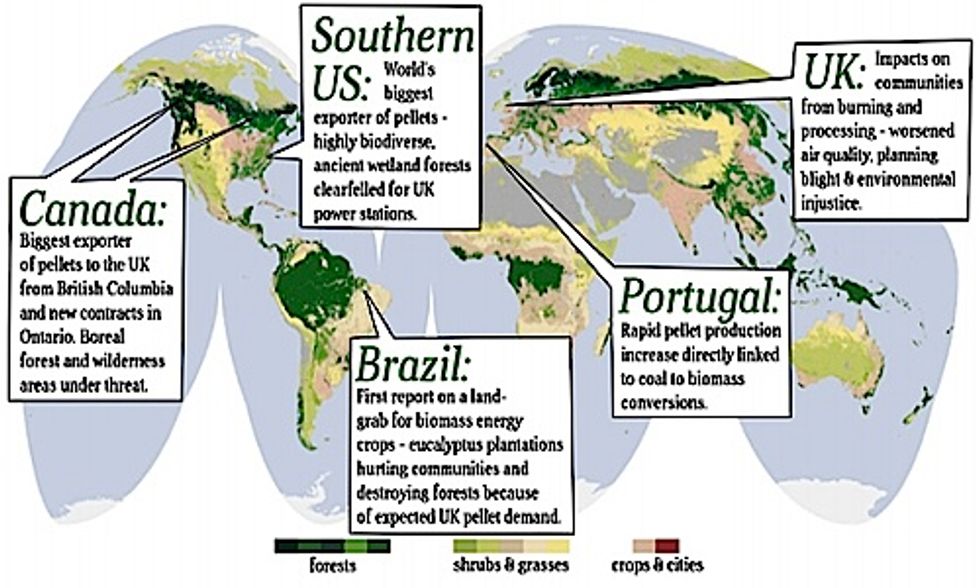 Biofuelwatch has launched a new report, Biomass: the Chain of Destruction, focusing on the human and environmental costs of biomass-focused UK renewable energy policy. The report includes the first ever study of a land-grab in Brazil for eucalyptus plantations directly linked to UK demand for wood pellets. The report also documents the impacts of Drax power station’s pellet demand, sourced from the destruction of ancient forests in the southern U.S. and Canada. The report goes on to document the impacts suffered by communities in the UK living next to biomass infrastructure.

“The Chain of Destruction highlights the impacts of UK support for biomass electricity, from the clear-felled forests of the Americas to the communities in the UK living in the shadow of the industry," said Biofuelwatch member Oliver Munnion. “But this is just the tip of the iceberg, and what we’re seeing is the impacts of a rapidly growing industry and the speculative investments of irresponsible companies, spurred on by generous subsidies and non-existent sustainability standards.”

Biofuewatch launched this report at a public meeting held in London last night.

Speaking at the meeting, co-author of the report into recent land-grabs in Brazil for biomass and World Rainforest Movement campaigner Winnie Overbeek said: “Planting eucalyptus in Brazil to be able to sell wood to the UK and other European countries is a substantially irrational thing to do. To fuel all of the UK’s electricity requirements through eucalyptus-based biomass would require some 55 million hectares of plantation in Brazil, an unthinkable amount of land, but an attractive prospect for companies like Suzano [plantation owners] and their shareholders.”

The report also documents the impacts of pellet demand, sourced from the destruction of ancient forests in the southern U.S. and Canada. Old growth forest clearcut in BC. Photo credit: TJ Watt

Also speaking at the event, Scot Quaranda of the Dogwood Alliance, described the impacts on diverse wetland forests of Drax’s pellet suppliers: “These are the world’s most biodiverse temperate forests, and they’re being cut to turn into pellets for companies like Drax.”

"They’re not thinnings, branches, tops or twigs—they’re whole trees that are being turned into pellets,” Quaranda continued.

“We undertook a door-to-door survey in 2011," said Donna Liley of the Mossley Environmental Action Group, who also spoke at last night’s meeting describing her community’s experiences of living next to the UK’s largest waste wood processing facility. "Residents reported symptoms including nasal erosion, hay fever/flu type symptoms, runny or irritated nose, sore or stinging eyes, nosebleeds, chest infections, headaches, fatigue and respiratory problems. Since the survey, there have been several deaths from cancer and high incidences of Alzheimer’s on one street back-to-back with the site.”

Finally, Sophie Bastable, a Biofuelwatch campaigner, presented a study conducted for the report looking into the link between social deprivation and biomass power station location in the UK.

“The study has uncovered significant environmental injustice, in that power stations are more likely to be located in more deprived communities,” concluded Bastable.