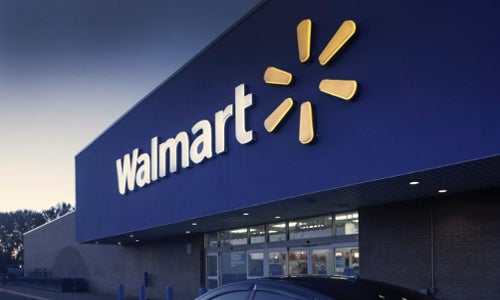 America’s largest retailer Walmart has been attempting to gild its image as a climate-friendly company. But environmental leaders charged today that its claims are nothing but greenwashing and that the company is a major contributor to climate change. A new study from the Institute for Local Self-Reliance (ILSR), Walmart’s Dirty Energy Secret: How The Company’s Slick Greenwashing Hides Its Massive Coal Consumption, says that the company’s dependence on coal make it one of the largest users of coal-fired electricity in the U.S. 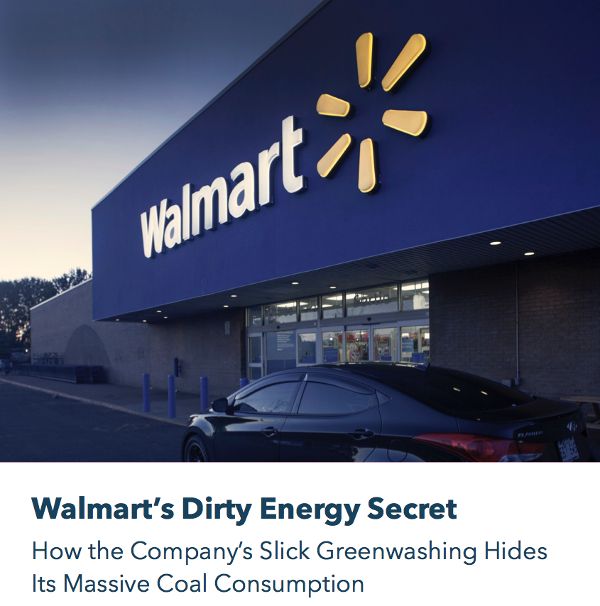 Walmart’s pose as a climate action leader is belied by its massive coal consumption. Photo credit: Institute for Local Self-Reliance

The report calculates that Walmart’s coal use is responsible for spewing nearly 8 million tons of climate change-driving carbon pollution into the air annually. ILSR calculated the total electricity use, coal-fired power consumption and resulting greenhouse gas emissions of every Walmart store and distribution center in the country, figuring that Walmart’s U.S. operations use nearly six times the amount of electricity as the entire U.S. auto industry. Coal accounts for nearly 75 percent of the company’s total emissions from U.S. electricity use.

“Walmart has made remarkably little progress in moving to renewable energy, while other national retailers and many small businesses are now generating a sizable share of their power from clean sources,” said Stacy Mitchell, a senior researcher at ILSR and co-author of the new report. “Despite making a public commitment to sustainability nine years ago, Walmart still favors dirty coal-generated electricity over solar and wind, because the company insists on using the cheapest power it can find.”

Last year, ILSR found that since Walmart launched its environmental campaign in 2005, the company’s greenhouse gas emissions have grown by 14 percent.

“Rather than fulfill the climate commitments it’s been making for years, Walmart is continuing to hurt the health and prosperity of our communities and families while endangering our planet.” said Michael Brune, executive director of Sierra Club. “Walmart can start living up to its purported values by ending the company’s heavy reliance on dirty coal and respecting their workers.”

The report points out that other retailers, such as Kohl’s and Ikea, have made giant strides in moving toward clean, renewable energy. Ikea, for instance, has installed rooftop solar panels on 90 percent of its U.S. stores. Walmart’s clean energy projects provide just 3 percent of its total U.S. electricity use.

“It’s unconscionable that the country’s largest employer and the world’s largest company is choosing to hurt our planet and hurt working families with its dirty operations and poverty pay,” said Bill McKibben, co-founder and president of 350.org. “Walmart and the Waltons can help our communities truly live better by switching to clean energy and paying workers a fair wage.”

“Walmart could single-handedly strengthen the middle class and help create a vibrant clean energy economy that promotes good jobs,” said Jeremy Hays, executive director of Green For All, a national nonprofit organization dedicated to building an inclusive green economy to lift people out of poverty. “After years of empty promises, Walmart should use be using its power and wealth to build stronger and more sustainable communities, not disrespecting workers and endangering the future of our planet.”

In the 10 states where Walmart uses the most coal-fired electricity, it consumes more than 2 million short tons of coal each year, equivalent to nearly 4 million metric tons of greenhouse gas emissions. In Missouri and Illinois, with their many coal-fired plants, Walmart produces more than 900,000 metric tons of carbon pollution.

“In Missouri, residents are calling for cleaner energy sources, rather than continued reliance on our aging and dirty coal plants that poison the air and water,” said Jeff Ordower, executive director of Missourians Organizing for Reform and Empowerment. “Rather than stand with Missouri in its efforts to go green, Walmart’s St. Louis supercenter uses more coal than any of its other U.S. stores. The one Walmart store pumps out more than 4,100 metric tons of climate pollution every year.” 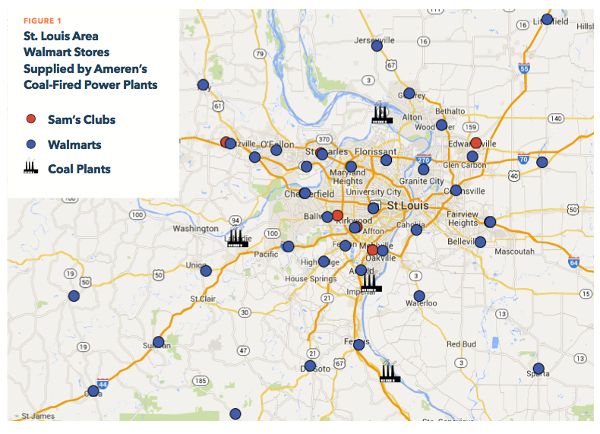 The St, Louis area includes the Walmart facility that burns the most coal of any in the U.S. Image credit: Institute for Local Self-Reliance

Not surprisingly, the company donates millions of dollars to candidates who support fossil fuel industries and oppose climate action. In the 2011-2012 election cycle, more than half of the Congressional candidates supported by Walmart and the Walton family, the company’s majority owners, received a 100 percent Dirty Energy Money score from Oil Change International. An ILSR study last month found that the Walton family is funding nearly two dozen organizations working to roll back clean energy policies and impede the growth of rooftop solar.

In April, consumer protection group The Green Life and Environmental Action named Walmart “the worst greenwasher of the year.”

“Walmart has made some big promises to environmentalists and the public, but sadly, many of the promises continue to go unfulfilled,” said The Green Life’s acting executive director Drew Hudson. “The truth is that Walmart’s current business model is unsustainable. From the way Walmart ships material to the fact that it has a 96 percent failure at their own goals for renewable energy. Americans need to know—there is a high climate-cost of low prices.”