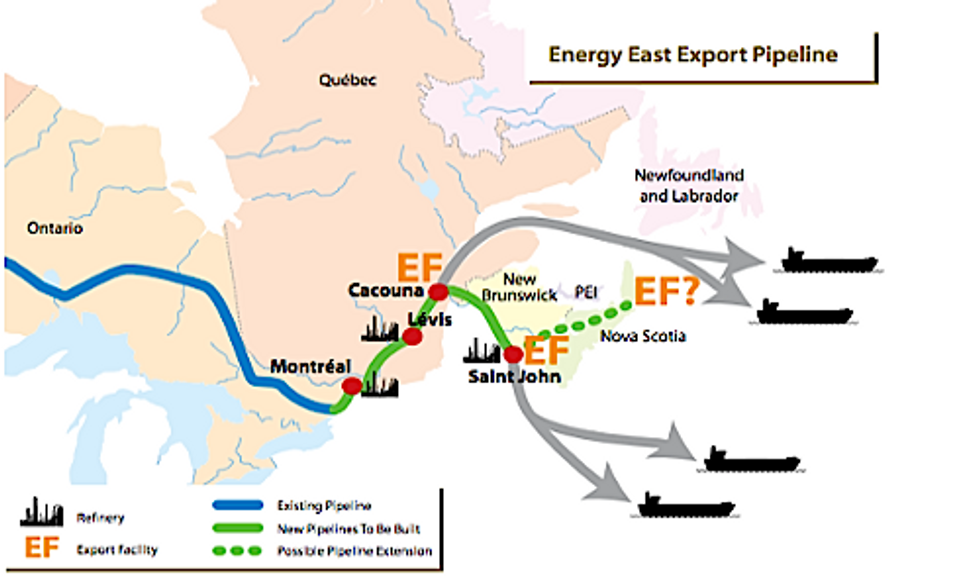 A new report shows that nearly all of the 1.1 million barrels a day of crude oil the proposed Energy East pipeline would carry would be exported unrefined. The report, TransCanada’s Energy East Pipeline: For Export, Not Domestic Gain, shows eastern Canadian refineries would process only a small amount of crude from Energy East, given that they already rely substantially on two other North American sources, with a third source imminent.

“Canadians are being misled about this risky project,” said Adam Scott of Environmental Defence. “The evidence is clear that Energy East is primarily an export pipeline.”

“Canadians would have all the risks of the pipeline, but little reward. Energy East threatens thousands of Canadians with the risk of a tar sands oil spill and only benefits the companies that want to export Canadian crude oil.”

The report shows refineries located along the Energy East pipeline route can process up to 672,000 barrels of crude a day (combined). Much of that capacity is already being filled by Atlantic crude and U.S. crude, with Line 9 soon to become a third major supply source.

“Energy East is industry’s desperate attempt to get landlocked Alberta tar sands to international markets for higher profits, not to help Canadians,” said Andrea Harden of the Council of Canadians. “You could say the only oil we are going to get in Canada is that which will leak out, a major concern given the pipeline route crosses numerous significant sources of drinking water.”

TransCanada has proposed export terminals for the port of Gros Cacouna, Quebec and in Saint John, New Brunswick. Another has been suggested by a third party. Of these three export points, only Saint John is located near a refinery, underscoring the purpose of Energy East is to export oil, not refine it.

“Maritimers are not being told the truth," said Catherine Abreu of the Ecology Action Centre. “Energy East will not create jobs or prosperity in our region. It will only put jobs at risk as it threatens the Bay of Fundy and turns us into an export terminus rather than a hub of local investment and economic growth.”

Because the largest piece of new pipeline would pass through Quebec, Quebecers would have to bear a lot of risk with little in return.

“With the Quebec provincial election underway, we are asking all parties to support the need for an Environmental Impact Assessment as well as participatory hearings on Energy East in Quebec,” said Steven Guilbeault d'Equiterre.

This report uses information from TransCanada, along with sources from industry, government reports and legal documents. The groups releasing the report are: Environmental Defence, Equiterre, Council of Canadians and Ecology Action Centre.