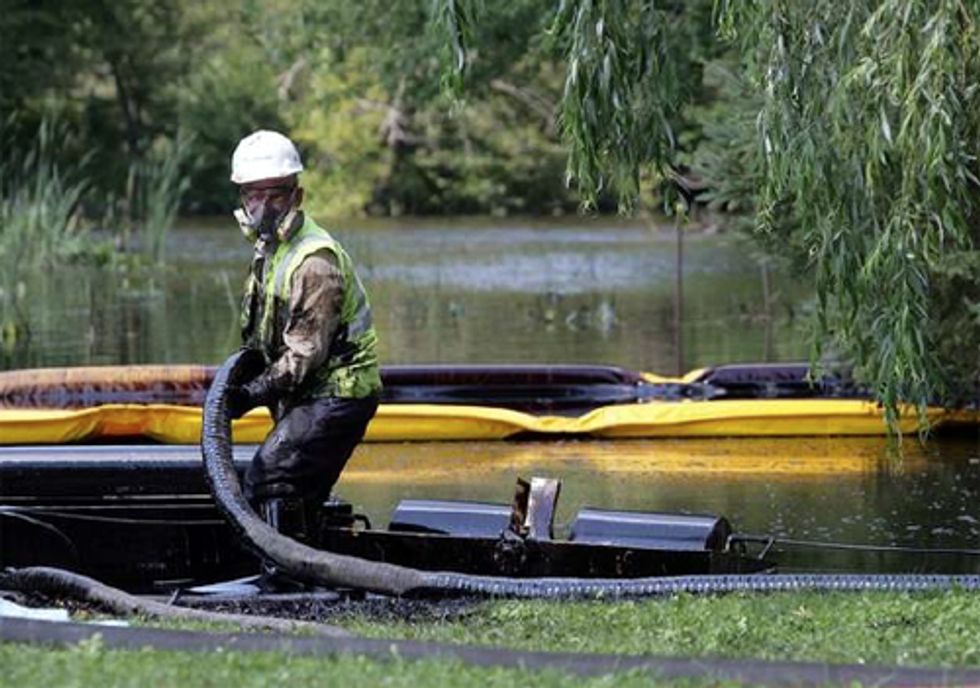 An ill-informed decision by the Internal Revenue Service (IRS) saying tar sands is not actually crude oil is giving tar sands oil a free ride from paying a tax which funds an oil spill cleanup fund, even though tar sands oil has properties that cause it to be costlier when it spills, and is more corrosive, posing increased risks to pipelines during transit.

Rep. Ed Markey (D-MA) questioned this tax free status on July 31 in a letter sent to the Treasury Secretary Timothy Geithner asking about the exemption, especially in light of last weekend’s pipeline spill in Wisconsin by the pipeline company Enbridge, a Canadian shipper of tar sands oil into the U.S.

On July 31, Rep. Markey’s sent a letter to Secretary Geithner urging a reversal of the IRS decision.

The decision by the IRS, originally reached in May of 2011, says that tar sands oil is not crude oil, and therefore importers of tar sands oil do not have to pay into the Oil Spill Liability Trust Fund. That fund is used to pay for the costs of cleaning up oil spills and for paying damages for a company’s spill. This tax loophole could cost taxpayers $50 million a year and send the fund into the red. The spill response fund is already at risk of running out of money because of the combined costs of BP’s Deepwater Horizon spill and the Kalamazoo River spill of tar sands oil, according to the Government Accountability Office.

“Tar sands is already the dirtiest, riskiest oil around. It shouldn’t get a free ride from the U.S. taxpayer when it comes to paying into this vital spill response fund,” said Rep. Markey, the ranking member of the Natural Resources Committee. “Oil companies already receive outrageous tax subsidies that total billions of dollars and there is no defensible reason for this oil spill free ride to be added to that dubious list of loopholes.”

Enbridge’s 2010 tar sands oil spill in Michigan proved that this type of oil is more difficult and expensive to cleanup than conventional crude oil. Cleanup crews found that because of its unique properties, the tar sands oil had to be cleaned up at every level of the river—the top, the middle and at the bottom, where it sunk into the sediment.

The IRS ruling that tar sands is not crude oil was done to satisfy one refiner and flies in the face of other government experts who say that tar sands is essentially crude oil. The IRS concluded that the generic terms crude oil and petroleum products, as contained in the statute, do not clearly include or exclude tar sands. Instead of attempting to understand the plain meaning of the words in the statute, the IRS based its decision entirely on a House Committee Report with curious language excluding tar sands from the definition of crude oil for the purposes of the Hazardous Waste Containment Act of 1980.