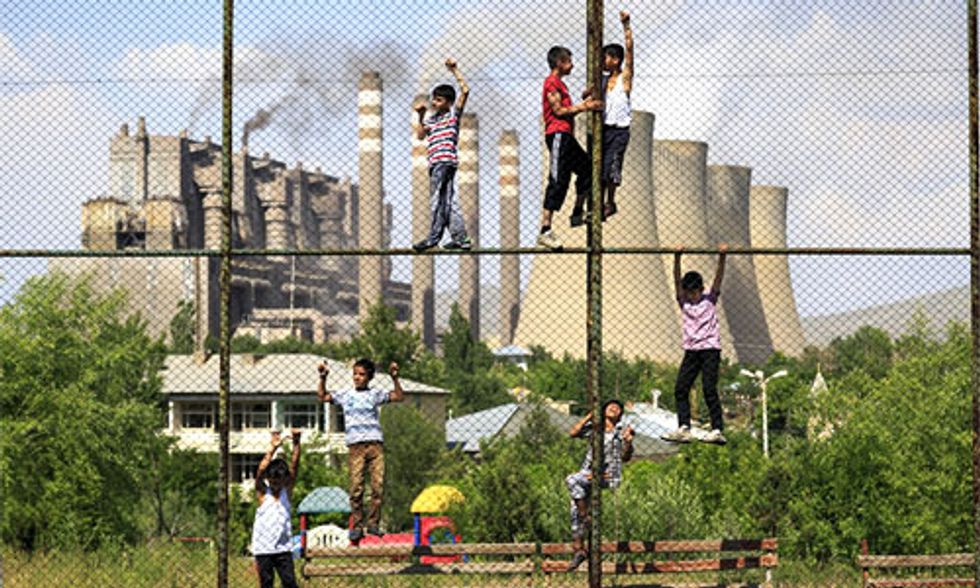 “I am well aware that every new coal investment is stealing from my children’s future. Not being able to assure our future feels so sad. Coal power plants are spreading out slowly and sneakily, penetrating into our cells—just like smoke and fume. They poison us without our notice and the worst is, not being aware of the threat. With the Smoky Future project, I wanted to say stop to all this. I aim to reach people with photographs before the smoke from coal power plants reaches them. I want them to be aware—before it is too late.”  — Kerem Yücel, photographer

In 2015, Turkish photographer Kerem Yücel collaborated with Climate Action Network (CAN) Europe for the Smoky Future photo-story project to document the life stories of local communities who are stuck right beside coal power plants and are under the threat of new coal infrastructures that are planned. Smoky Future, which opened as an exhibition in Istanbul in 2015 and nowadays on tour in different coal towns in Turkey, has recently been awarded the third place for the best photo-journalism prize of Photo Journalist Association of Turkey.

As of 2016, there are 21 coal power plants in operation in Turkey and there are around 80 new coal power plants planned in line with the country’s 2023 energy vision. Local communities, national NGOs, environmental lawyers, photographers, medical associates, archaeological experts in Turkey collaborate and resist to shelf the devastating coal infrastructures projects that are planned. Thanks to the resistance, almost half of the first round projects have been cancelled and some of the planned projects face serious risks.

After China and India, Turkey is the third country in the world with the highest number of new coal projects in the pipeline. Having around 80 new coal power plants by 2023 would add at least 200 million tons of CO2 emissions, on top of 68.7 million tons in 2012, which would make Turkey one of the world’s major emitters and a climate bomb. This ticking climate bomb is also about to explode inside the country, as the drastic health and pollution impacts of coal power plants on humans and their surrounding ecosystem becomes more and more significant. According to Health and Environment Alliance’s 2015 report, the total health impacts from coal combustion plants in Turkey amount to 86,393 life years lost or 2,876 premature deaths per year.

The photo-stories reflect the Smoky Future that awaits Turkey if the policy makers choose to continue on the current pathway towards a complete lock-in to coal. However, people in Turkey choose to break free from coal instead, for rather a bright future.

Yirca is a small village in Soma district of Manisa. Manisa is famous with its grape production whereas Soma is famous with its lignite coal. Due to global climate change related weather abnormalities in 2015, grape farmers had a big loss in their crops. Meanwhile, the feasibility studies for the second coal power plant in Soma is concluded, awaiting its license, on the second year of the Soma coal mine explosion where 301 miners have lost their lives.

The royalty agreement signed with Kolin, the investor, gave the company the initiative to start constructing the coal infrastructure in Yırca village of Soma, in 2014. While the environmental impact assessment process in addition to the court cases opened against the company (by Greenpeace and Yirca villagers) and the “emergency expropriation” of the olive groves carried on, Kolin workers violently took out 6,666 olive trees.

The coal power plant project Kolin planned in Yırca did not come through thanks to massive resistance, but the company is now trying to realize the project in Kayrakaltı village, neighboring Yırca.

In the Soma district of Manisa, which was originally famous for its grapes and agricultural production, clean rivers feel like surreal street decoration as Soma is now one of the coal-towns of Turkey.

Gülnaz Kıllı and her 9-year-old grandson, Hasan Hüseyin, represent only one of the households in Sarıseki where the inhabitants suffer from chronic respiratory diseases. She said: “My 9-year-old grandson has asthma, so as the children of most of our neighbors. It’s their right to live and grow up in a healthy, sustainable environment. I have been active in our struggle since 1999 and now our community in Sarıseki is facing displacement due to the interests of the coal industry.”

Iskenderun Bay has one of the most diverse terrestrial and marine ecosystems in Turkey. Twenty percent of citrus production comes from this area and a majority of local people earn their lives from fishing, production of vegetables, fruit, olives and olive oil.

With increasing number of planned new coal power plants in addition to fast pace industrialization, İskenderun Bay is becoming the most polluted region of Turkey where it is getting more and more difficult for local communities to sustain their lives.

Currently there are three coal power plants in the area and there are 29 more in either licensing, impact assessment or constructions phases.

The open air coal storage area that got established just next to Kurtpınarı village of Adana, renders local communities bound to live in coal dust as the sea breeze comes from behind the coal storage area. Fifty-six-year-old Dürdane Erdoğuk, an inhabitant of Kurtpınarı, said, “We live in coal dust for the last three years, since there’s a big, open-air coal storage area next to our village. We breathe coal, we eat coal, we drink coal. I don’t want to move away because of it; I want to live on my land free of coal.”

While the open-pit lignite mine, that provides coal to Afşin-Elbistan A-B power plants in Kahramanmaraş, destroys the arable land, kids from Çoğulhan, spend their summer holidays under the shadow of Afşin-Elbistan a power plant.

Located in inner Anatolia; Afşin-­Elbistan is one of the most polluted regions of Turkey. There are two existing coal power plants in the region with total installed capacity of 2435 MW and there are three new units (Afşin Elbistan, C D E) planned to add an additional capacity of 8200 MW.

Çoğulhan is the only arable land left, in this area. The air pollution, water and soil contamination caused by coal power plants, coal mine and coal dust has significantly started to disrupt small scale, family farming.

The blue-flag-beach of Karabiga, Çanakkale, is threatened to lose its blue-flag and tourism potential once the construction of Cenal power plant is finalized and its chimney starts pumping dust and emissions.

İzdemir coal power plant in Foça, which is in operation despite the open court cases against its license, has caused many people to migrate to urban parts of the region. Currently, only two households are left near the coal power plant.

Auntie Sabriye came as a bride to a 28-people household who lived on this land back then; she now lives alone as her family and relatives have already left Foça as the only available employment opportunities left have to do with the coal power plant, ash pond or then constructions of new industrial infrastructures. Auntie Sabriye talks about her vision of the region and says,“I wish people would visit here to see Kyme archaeological site, do wind surfing in this region. I wish we were busy with agriculture, fishing and tourism instead of the smoke coming out of that coal power plant. Then, everything would have been in place.”

Wherever there is a coal threat in Turkey, there is also resistance asking for the right to live and a smoke-free future. For that reason, the Break Free 2016 escalation in Turkey will mobilize different resistance groups to Foça/Aliağa as it is an iconic place with its cultural heritage sites, its history of community mobilization against coal power plants and the irreversible threats to both the region and the country if all coal infrastructure projects come to realize on top of existing ones.

Join the people of Turkey in May, to mark the end of fossil fuel era. Check out the details in English and Turkish.

Human chain against the planned coal power plant in 1990, Aliağa/Foça. Anonymous photo from the archives of local resistance.