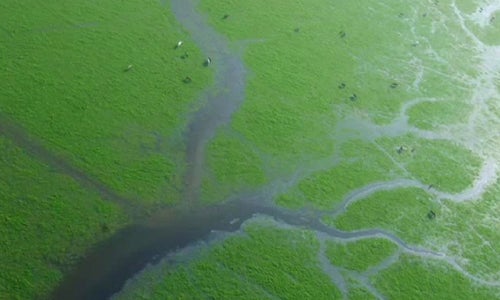 Dan Barber has been making waves in the food movement for years. Barber is the chef of Blue Hill, a restaurant in Manhattan’s West Village and Blue Hill at Stone Barns, located within the nonprofit farm and education center, Stone Barns Center for Food and Agriculture, in Pocantico Hills, New York. 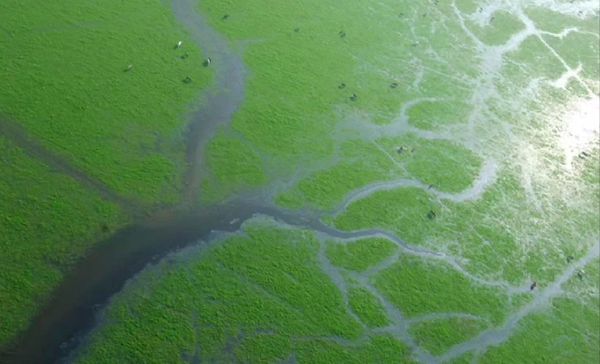 This fish farm in southwestern Spain is an ecological oasis: “The system is so healthy that it’s totally self-renewing,” says Barber.

Stone Barns’ mission is to “experiment with and improve sustainable farming practices, train beginning farmers in resilient, regenerative farming techniques, help children discover the sources of their food while preparing them to steward the land that provides it, and increase public awareness of healthy, seasonal and sustainable food.” For his work, Barber has received multiple James Beard awards including Best Chef: New York City in 2006 and the country’s Outstanding Chef in 2009. Also in 2009, Time magazine named him one of the 100 most influential people in the world.

Last summer, Barber garnered much praise for his book, The Third Plate: Field Notes on the Future. In his book, Barber moves beyond the farm-to-table movement, which championed the “second plate.” He offers a revolutionary new way of eating, the “third plate,” which is rooted in cooking with the whole farm in mind. After researching farm communities throughout the world for more than a decade, Barber concluded America’s food needs a radical transformation to ensure the future of our health, food and land.

Barber has given two wildly popular Ted Talks, the first of which is about a small farm in Spain that produced foie gras. The foie gras farmer, Eduardo Sousa, does not keep his geese penned in, but they stay because he keeps them so happy. His geese also call to wild, migrating geese, who then stop and end up staying because his farm is such an eden.

Sousa’s geese are not force-fed as they are in modern foie gras production, which Sousa calls “an insult to history.” After his visit, Barber realized the entire modern food system is “an insult to history” because “it’s an insult to the basic laws of nature and of biology.” Barber calls for a new approach to agriculture, “one in which we stop treating the planet as if it were some business in liquidation and stop degrading resources under the guise of cheap food. We can start by looking to farmers like Eduardo.”

The second Ted Talk is also about a farm in Spain that understands how its farm fits into the larger ecological system. It’s a fish farm in the southwestern corner of Spain. Barber begins by laying out the state of global fisheries: “We’ve been fishing the seas like we clear-cut forests … Ninety percent of large fish—the ones we love: tuna, halibut, salmon, swordfish—have collapsed. There’s almost nothing left.” That leaves us with fish farming, which, Barber says, can have a lot of ecological and ethical drawbacks.

But this fish farm is an ecological oasis: “The system is so healthy that it’s totally self-renewing.” The farmers don’t feed the fish. The fish are eating what they’d be eating in the wild. The farm loses 20 percent of its fish and fish eggs to birds, who thrive in these wetlands—the farm is one of the largest private bird sanctuaries in Europe. But the fish farmers don’t mind because their farm thrives, not in spite of the birds, but because of the birds. It’s an ecological network.

Barber bemoans the question someone inevitably poses: “Yeah, yeah, I love birds too, but how are you going to feed the world?” Barber responds by saying “we all ready produce enough calories to more than feed the world. One billion people go hungry today … because of gross inequalities in distribution, not tonnage.” The focus on “more food more cheaply” has guided agriculture production for the last 50 years, and it’s resulted in a “business that’s quickly eroding the ecological capital that makes that very production possible,” said Barber. “That’s not a business. And that’s not agriculture.”

So, Barber says, “Want to feed the world? Let’s start by asking, how are we going to feed ourselves? Or better: how can we create conditions that enable every community to feed itself?”

When it comes to creating a sustainable agricultural system, Barber recommends looking at the ecological model instead of the industrial one. Look “to farms that restore instead of deplete, to farmers that farm extensively instead of just intensively. Farmers that are not just producers but experts in relationships because they’re the ones who are experts in flavor too.” And we all want food that is not only ecologically and ethically sound, but delicious too.