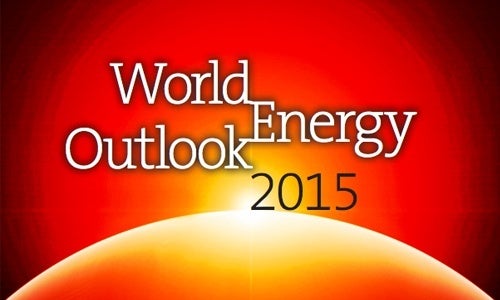 The International Energy Agency’s (IEA) latest report found that “in advance of the critical COP21 climate summit in Paris, there’s a clear sign that an energy transition is underway.” The World Energy Outlook 2015 report, published today, found that “renewables contributed almost half of the world’s new power generation capacity in 2014 and have already become the second-largest source of electricity (after coal).”

More than 150 countries have submitted climate pledges ahead of the Paris climate talks, and they are “rich in commitments on renewables and energy efficiency,” says the IEA. The report also found renewables are set to become “the leading source of new energy supply from now to 2040.” And renewables will overtake coal as the largest source of electricity generation by the 2030s.

The IEA projects “turbulent times” ahead for coal: “Coal has increased its share of the global energy mix from 23 percent in 2000 to 29 percent today, but the momentum behind coal’s surge is ebbing away and the fuel faces a reversal of fortune.” China’s coal use will “plateau at close to today’s levels,” says the IEA, but India’s energy demand will grow to 2.5 times its current rate.

It remains to be seen whether India will pursue the coal-heavy track that China followed. Coal demand is set to triple in India and Southeast Asia by 2040, reports the Guardian. At the same time, India is one of many countries aiming to become a so-called “solar superpower,” making a huge commitment to renewables at its first big renewables trade convention earlier this year. And India lays claim to the world’s first airport powered entirely by solar energy.

“Renewables-based generation reaches 50 percent in the EU [European Union] by 2040, around 30 percent in China and Japan, and above 25 percent in the United States and India,” according to IEA estimates.

The rapid growth in renewable energy will help emissions to slow “dramatically,” says the IEA, but the current emissions trajectory shows we are still heading for 2.7 degrees Celsius warming by 2100.

The IEA warns that a “major course correction” is still required to keep warming below the two degrees Celsius target. “As the largest source of global greenhouse-gas emissions, the energy sector must be at the heart of global action to tackle climate change,” said IEA Executive Director Fatih Birol.

“World leaders meeting in Paris must set a clear direction for the accelerated transformation of the global energy sector,” she added. “The IEA stands ready to support the implementation of an agreement reached in Paris with all of the instruments at our disposal, to track progress, promote better policies and support the technology innovation that can fulfill the world’s hopes for a safe and sustainable energy future.”

Meanwhile, the UK’s Met Office report found that global warming is on track to exceed one degrees Celsius above pre-industrial levels by the end of the year.

But several groups are outlining how we can rapidly transition to a low-carbon future by expediting the deployment of renewable energy worldwide. Just yesterday, NextGen Climate America released a new report showing that the transition to a clean energy economy will drive economic growth for decades, create well-paying jobs and increase household incomes. And in September, Greenpeace outlined a path for the world to transition to 100 percent renewable energy by 2050.

“The impossible is becoming possible. The global breakthrough of renewable energy has happened much faster than anticipated,” said Emily Rochon, global energy strategist at Greenpeace International.

“The IEA is catching up on renewable energy trends, but it is still failing to see the full potential of change,” said Rochon. “We believe that with the right level of policy support, the world can deliver 100 percent renewable energy for all by 2050.”