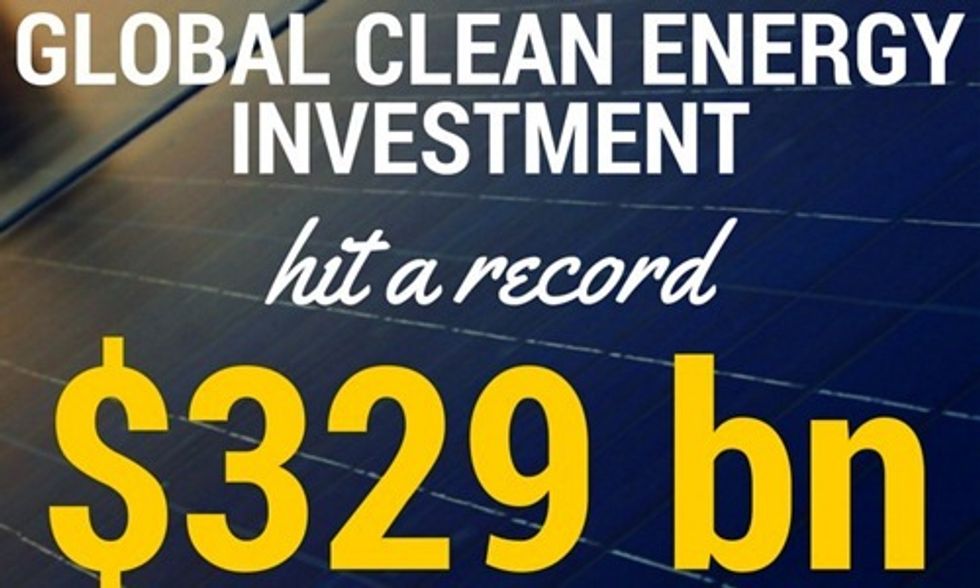 Spending on clean energy technology increased 4 percent from 2014, due to tumbling prices for photovoltaics and wind turbines, as well as large investments in offshore wind farms. According to BNEF, renewable energy installation in 2015 was up 30 percent compared to the same period in 2014, setting a record for the most installation of renewable power capacity in a year. Globally, wind and solar made up half of all new generation technologies, including fossil fuels. Around 64 gigawatts of wind capacity and 57 gigawatts of solar were commissioned.

“These figures are a stunning riposte to all those who expected clean energy investment to stall on falling oil and gas prices,” Michael Liebreich, chairman of the advisory board for BNEF, said. “They highlight the improving cost-competitiveness of solar and wind power.”

Emerging markets saw substantial increases in renewable energy investments. China remained the largest market, increasing investment 17 percent to $110.5 billion. That's nearly double the $56 billion invested by the U.S., which came in second in BNEF's rankings. India increased its investment by 23 percent to $10.9 billion. New markets such as Mexico, Chile and South Africa attracted tens of billions of dollars. Brazil was an outlier, where investments dropped 10 percent to $7.5 billion.

In contrast to emerging markets, Europe saw investments in renewable energy fall 18 percent to $58.5 billion in 2015, its lowest figure since 2006. Germany and France saw investment levels fall by 42 and 53 percent, respectively. The UK, however, bucked Europe's overall trend, with investments growing 24 percent due, in part, to large offshore wind developments, such as the 580 megawatt Race Bank wind farm in the North Sea.

The 2015 renewable energy installation record is "all the more remarkable as cost-competitiveness improvements in solar and wind power mean that more megawatts can be installed for the same price," the report explains.

“Wind and solar power are now being adopted in many developing countries as a natural and substantial part of the generation mix,” Liebreich said. “They can be produced more cheaply than often high wholesale power prices. They reduce a country’s exposure to expected fossil fuel prices. And above all, they can be built very quickly to meet unfulfilled demand for electricity.”

"And it is very hard to see these trends going backwards, in the light of December's Paris Climate Agreement," Liebreich added.

The boom in clean energy investment, as BNEF explains, comes in spite of the low price in fossil fuels, which some analysts predicted would restrain investment in renewables.

"Over the past 18 months the price of Brent crude has dropped 67 percent to below $40 per barrel, while the price of natural gas in the U.S. fell 48 percent and the price of international steam coal dropped 35 percent in Europe," BusinessGreen said. On Tuesday, the price of crude in the West Texas Intermediate briefly dropped below $30 a barrel for the first time in 12 years.