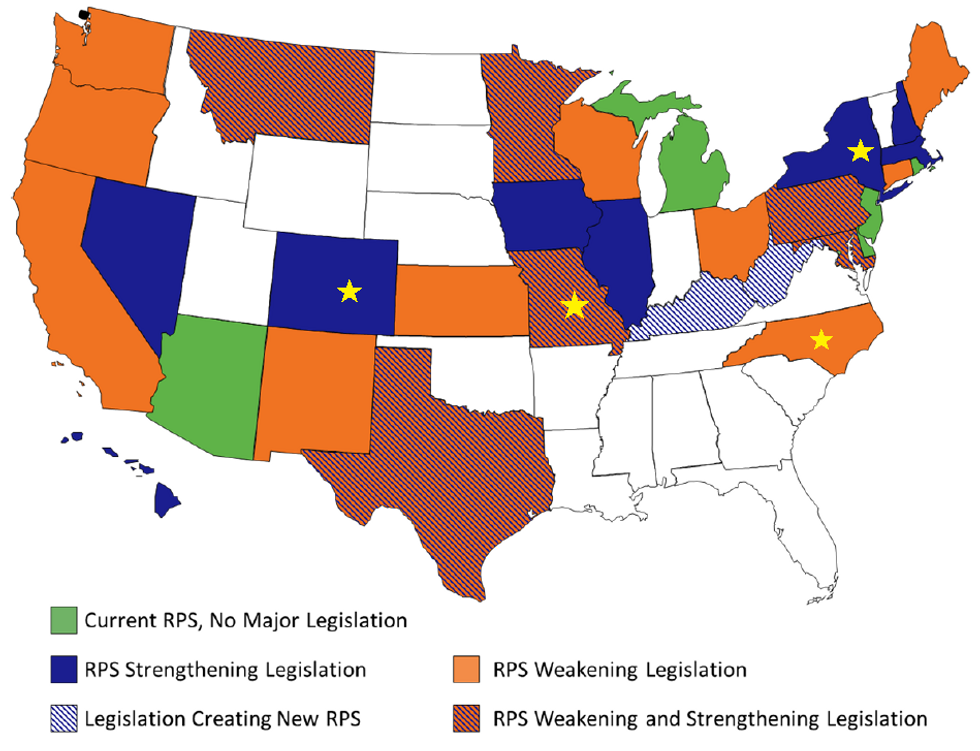 Media coverage of renewable energy developments at the state level continued to center on the efforts led by the Koch Brothers-backed American Legislative Exchange Council (ALEC) to try and weaken, repeal or “repeal-by-weaken” renewable energy portfolio standard (RPS) in a couple dozen of the 29 states plus Washington, D.C. that have them.

There are several, perhaps less well known, positive developments too.

The figure below from a recent report by Justin Barnes and Chelsea Barnes of Keyes, Fox & Wiedman, LLP, categorizing active legislative proposals as either "strengthening" or "weakening" state RPSs, provides what I think is a more accurate and more complete picture of what is going on with clean energy in state legislatures. The starred states denote the four states with in-depth reviews.

One important thing to note is that this report only captures state legislative proposals and does not include state administrative decision-making forums, e.g., governors’ executive order and state utility boards/commissions where equally if not more important policy and implementation decisions also take place.

Let’s now dive into the states—a lot has happened in the month of April and first half-week of May.

HB 298, which sets out to douse the sustained growth of North Carolina’s clean energy sector by opening the floodgates of already paid-for, decades-old existing hydropower to qualify as "new renewable energy," was soundly defeated on April 24 in the House Public Utilities Committee (chaired by HB 298's primary sponsor Rep. Mike Hager) by a majority 18-13 roll call, bi-partisan vote. Sue Sturgis at the Institute for Southern Studies’ wrote in the institute’s online magazine, Facing South that the bill’s defeat in the Public Utilities Committee came down to one big reason, jobs:

When the repeal bill came up for its first public hearing earlier this month in a House Commerce subcommittee, the only people who spoke in favor of it were from Americans for Prosperity and the Civitas Institute, another conservative advocacy group. The overwhelming majority of speakers praised the renewable energy law's positive economic impact. Besides owners of clean energy companies, they included farmers who have begun investing in systems to generate power from livestock waste methane, which counts as a renewable under North Carolina's law. They were also joined by rural economic development advocates who spoke about how clean energy generation has created jobs and expanded the tax base in struggling rural communities.

It proved a convincing message in a state with the nation's fifth-highest unemployment rate and entrenched poverty in rural areas, where many of the state's renewable energy projects are located.

But not to be outdone, later that same day after the House Public Utilities Commission defeat, the sole sponsor of the companion North Carolina Senate Bill (SB 365), Sen. Andrew Brock, brought up the bill in the Senate’s Finance Committee for a non-roll vote, meaning a vote via voice only. Observers say that nays were nearly equal to the ayes and that it was too close to call and should have at least received an actual count (counting via a raise of hands). Sturgis offers a thorough analysis of who’s behind the RPS repeal efforts and their respective legislative sponsors (i.e. ALEC plus at least 15 additional pro-fossil, pro-polluter groups).

With a couple of weeks remaining in the North Carolina legislative session, the sponsors of both HB 298 and SB 365 have made it clear that they intend to continue pushing their bills in committee. And we will continue to remind clean energy naysayers that they are up against popular support from North Carolinians who want a cleaner and safer place for kids and families to live, along with continued local economic growth and new clean job opportunities.

Thanks in part to Colorado-based NRDC members who voiced their support for clean, renewable energy, the Colorado legislature voted to increase rural access to renewable energy last week to 20 percent by 2020, doubling access for clean energy to 100,000 Colorado customers. The new policy could result in as many as 10,000 new wind, solar and renewable jobs. The bill now awaits Gov. Hickenlooper’s signature, which he is expected to sign, having showed his support for the measure as it made its way through the Colorado legislature.

The NY-Sun Program launched more than a year ago and has thus far surpassed its interim goal of "doubling the amount of solar installed in 2012 [compared to 2011]" with a near tripling in the amount of installed solar in New York State.

Given the promise for the solar industry in the state—along with the economic and climate change-combating benefits that come with it—it’s no surprise that the NY-Sun Act has support from a coalition of businesses, trade associations and environmental groups. Now it's the NY Assembly's turn, which has shown strong bi-partisan support to enact a long-term policy commitment to deploy solar at scale in New York State, i.e. to extend the NY-Sun.

Our colleagues on the ground in Jefferson City, MO, RenewMO, report that HB 44—a bill similar to North Carolina’s "repeal by flood" by allowing decades-old existing hydropower to earn credits under the existing renewable energy standard—continues to lie dormant. Only a few days remain on the Missouri legislative calendar for 2013. In a similar vein to our activities in North Carolina, we have continued to keep a close eye on bill movement and possible amendments to other bills that could carry RPS-weakening language, while at the same time showing state lawmakers that the RPS is bringing clean energy growth and jobs, benefiting all Missourians.

The final word for April

What is truly remarkable about U.S. state-level support for clean, renewable energy standards is that, even in these times of supposedly “cheap and abundant natural gas that will last for decades to come” is that renewable energy and efficiency continues to grow—despite continued policy uncertainties at the federal level. The claim that states are rejecting renewable energy rings hollow. It’s the fossil-fuel-backed, out-of-state groups like ALEC that were hoping to get states and utilities to turn their backs on clean energy.

Clean energy foes only face a steeper climb against the "super"-majority of Americans who see with their own eyes that locally available clean and renewable energy is in fact affordable, providing tens of thousands of new local jobs, while cleaning the air we breathe and combating climate change at the same time.