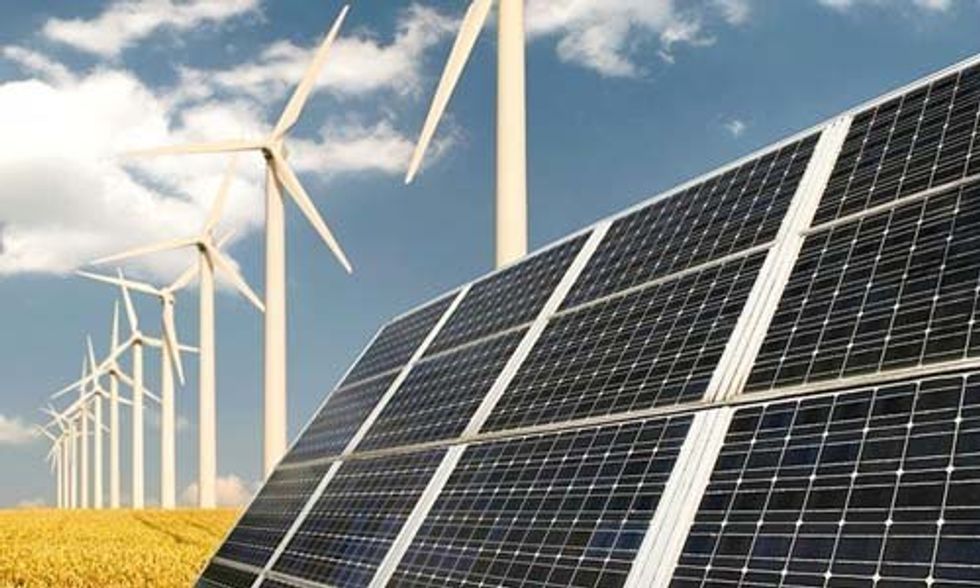 One of the biggest stories of 2015 was the sharp decline of oil prices, which fell this year to levels not seen in more than a decade.

Greenpeace, among many others, has said 100 percent renewable energy for all is achievable by 2050—and is the only way to ensure the world does not descend into catastrophic climate change. Photo credit: fotolia.com

"A repeat in early 2016 could well push crude oil to fresh closing lows not seen since the early 2000s," the Fiscal Times added.

It was good news for fuel consumers—drivers who flocked to SUVs and pickup trucks in 2015, for instance—as well as for governments that import crude oil.

But this trend could easily translate into bad news for stemming climate change, a goal that depends on keeping the vast majority of fossil fuels in the ground.

Yet surprisingly, even "amid a worldwide glut of cheap fossil fuels," the Washington Post's Joby Warrick reported, "business is blowing strong" for the renewable energy industry as well.

Indeed, Warrick wrote, 2015 saw "a global surge for wind and solar energy, which occurred despite oil, coal and natural gas selling at bargain rates." He pointed to "massive new projects" under construction from China and India to Texas, as well as growing capacity in the U.S., which recently "crossed the 70-gigawatt threshold in wind-generated electricity, with 50,000 spinning turbines producing enough power to light up 19 million homes."

Improved technology, combined with "new government policies here and abroad that favor investment in renewables" and "a growing willingness by Wall Street to pour billions of dollars into projects once considered financially risky," are all contributing to the boom, according to the Washington Post.

"Renewables have turned a corner in a fundamental way," Dan Reicher, a former Energy Department assistant secretary who is now executive director of Stanford University's Steyer-Taylor Center for Energy Policy and Finance, told the paper.

Warrick credited the Paris agreement hammered out at last month's COP21 climate talks in part for spurring this momentum. As Common Dreams reported at the time, fossil fuel stocks tumbled while renewable energy soared on the first day of trading after global leaders cemented the landmark pact in Paris.

Interestingly, at least one wind-energy company said the effect of cheap fossil fuels has been counter-intuitive. Warrick reported:

"At Vestas Wind Systems, which is based in Denmark, [CEO Anders] Runevad said the recent drop in prices for traditional fuels has prompted some of his customers to actually increase their spending on wind farms, especially in countries that are heavy importers of petroleum.

"Some countries are having a budget surplus now because of low oil prices and they’re using that money to invest in new infrastructure. For importing countries, it’s a net-positive. Because of the uncertainty with gas prices, we haven’t seen any of our wind customers say, ‘Let’s build a gas-fired plant instead.’"

Still, major hurdles lay ahead if a complete transition to clean energy is to be achieved. Wind and solar power still account for minuscule pieces of the energy pie, in the U.S. and elsewhere.

The Associated Press reported that, for reasons ranging from technical to regulatory, while "[c]onverting the wind and sun into electricity is increasingly affordable ... it can be difficult to get that electricity from distant plains and deserts to the places where it’s needed."

But surmounting such obstacles is critical, as bidding farewell to fossil fuels could have enormous implications not just for the global climate, but for the world's population. "[E]specially for the people of Beijing—and Delhi and Tehran, among other cities currently choking on dirty emissions—that final goodbye can't come soon enough," the Huffington Post's Lynne Peeples wrote.

Indeed, as renewables boom, Harvard University environmental health expert and pediatrician Aaron Bernstein said at a panel on climate change and health, "We actually stand at an entry point to perhaps the greatest public health intervention ever."