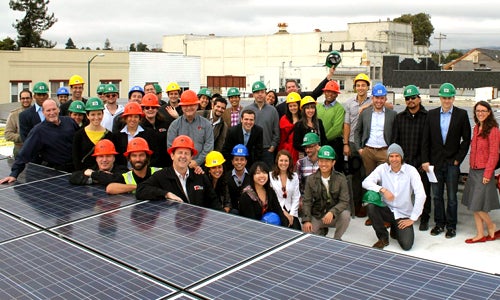 By Billy Parish, co-founder of Mosaic and co-author of Making Good: Finding Meaning, Money & Community in a Changing World

The world has seen three major energy epochs. The first started when we harnessed fire to cook, keep warm and light our nights. The second began when we figured out we could burn condensed ancient swamp muck (first coal, soon oil) to power our cars and radios. The third epoch only recently began.

Hundreds of clean energy investors celebrate the installation of

Mosaic’s first project offering a return on investment. Fifty-two people are earning 6.38% interest each year from the solar panels located atop the Youth Employment Project in Oakland, CA.

Energy, the world’s largest industry, is undergoing a tectonic shift. It’s time to stop hedging our bets. It’s time to embrace the idea that we have the power to transition the entire planet to 100% clean, renewable energy.

The shift didn’t come out of nowhere. For decades, we’ve been developing better clean energy technologies, even as the fossil fuel industry has (literally) dug itself into a very deep hole.

The biggest story is in solar. The cost for panels has fallen by more than 99% in the past three decades, from more than $75 per watt in 1977 to about 50 cents per watt today. 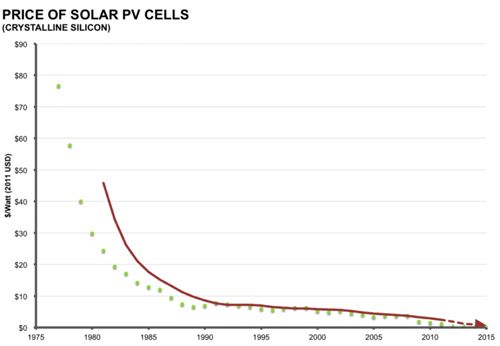 The cost for wind turbines has declined dramatically over the same period. 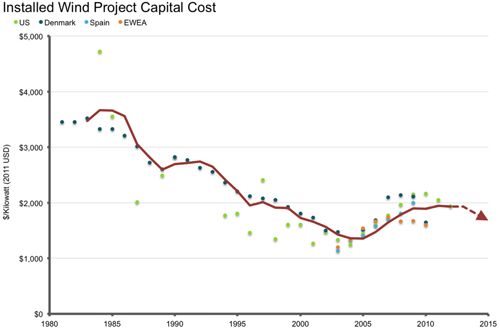 Meanwhile, as we’ve burned through the most easily accessible reserves, fossil fuel prices continue to rise. Coal prices have been steadily increasing … 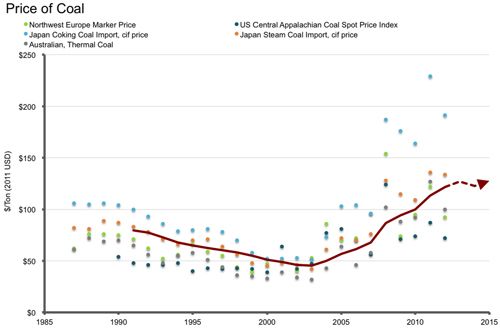 and oil prices have gone on a dramatic upward run. 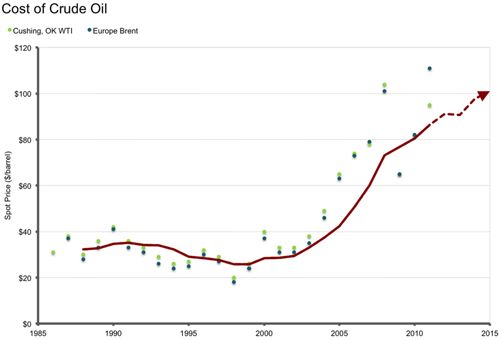 And even accounting for the supply increases from fracking here in the U.S., natural gas prices across the world have still more than doubled in the last decade alone and the U.S. Energy Information Administration forecasts steady price increases over the next 30 years. 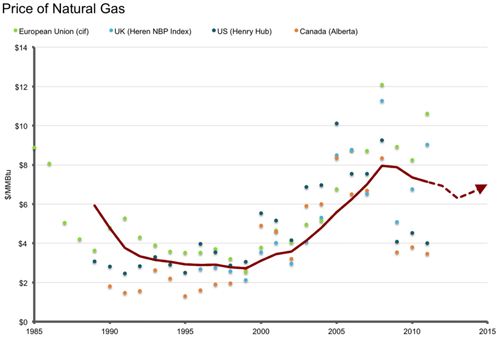 The overall trend is clear. Our energy world is turning upside down. All over the world, it’s starting to make more financial sense for people to power their lives with clean energy rather than dirty fuels.

Despite the changing economics of energy, many still question the feasibility of scaling up clean technologies. A common refrain is that renewables are too intermittent or too hard to integrate into the grid to quickly meet 100% of our energy demand.

In 2011, two professors, Mark Jacobson from Stanford and Mark Delucchi from UC Davis, asked whether we could run our entire planet on wind, water, and the sun. Like others who have conducted similar analyses, they came to the conclusion that there are “no technological and economic barriers to converting the entire world to clean, renewable energy sources.”

“What we lack,” they said. “is societal and political will.”

Make no mistake: the task is huge. In Jacobson and Delucchi’s model, we’ll need to build 3.8 million large wind turbines and 90,000 solar power plants. Our roofs our going to have to shine, because we’ll need 1.7 billion rooftop solar arrays.

Globally, the amount of investment required is on the order of $100 trillion dollars. Put simply, building out a new clean energy infrastructure may be the biggest business opportunity on the planet.

One hundred is not only achievable, it’s fast becoming the new normal.

To get a sense of our moment, google “100 percent clean energy” or “100 percent renewable energy.” You’ll find that major companies, cities, states, regions, and even countries are all operating under a new energy paradigm.

Google itself has made a billion dollars in direct investments in wind farms over the past three years and has publicly stated its intention to reach 100%. Apple announced in March that it powers its data centers with clean energy and has committed to 100% clean energy for all its facilities. Ikea is aiming for 100% renewable energy by 2020 and is starting to sell flatpack solar panel kits alongside its couches and tables. Walmart is now the United States’ single largest producer of renewable energy.

And how about the places we call home? A number of U.S. cities —from larger hubs like San Francisco, Austin and Washington D.C., to smaller towns like Evanston (IL) and Santa Barbara — have already committed their municipal governments to purchasing 100% clean energy, and have programs to encourage their citizens to do so as well.

Greensburg, Kansas, was devastated by a tornado in 2007. City leaders decided to to rebuild with an eye to the green part of the town’s name. Now Greensburg is closing in on 100% renewable energy, mostly from wind. According to news reports, a popular t-shirt in the conservative, Great Plains town reads: “Greensburg—A Wind-Wind Situation.”

Internationally, the story is even more striking. In Germany, a sort of renewable energy arms race is breaking out among counties. Nordfriesland is at 260%, Prignitz at 261%, and Dithmarschen at 280%. In small villages, the numbers are even more wild. The 900 person village of Kronprinzenkoog now meets 5,000% of its power demand with clean energy, and sells the rest back into the grid.

Then there are the figures emerging from states, regions and countries. Our team at Mosaic tries to track the news, but it’s hard to keep up. We finally put it all into a map: Three months old, our infographic is already out of date.

The transition to 100% clean energy is inevitable. The only questions are how fast we can do it and who will benefit from the investments we need to make.

There are vanishingly few sources of capital to finance clean energy projects. Of the more than 8,000 banks in the U.S., there are fewer than 20 that currently have a dedicated department for clean energy financing. And because there are so few banks investing, they are able to charge very high rates for their capital, making many good clean energy projects uneconomical. Banks will cut a developer a sweet deal on a loan for a $500M natural gas power plant, but try to get a $100,000 loan for a rooftop solar array and most likely you’ll be out of luck.

If we want a new energy system, we need a new financial system along with it. We need something that looks more like an ecosystem, with many diverse pots of money funding many diverse energy infrastructure components.

Do you know who has more money than banks? People do. And there are new opportunities emerging for us to put it to work.

Take solar: in several states, new laws are making it possible for renters to buy into community solar gardens and wind farms. My company, Mosaic, is leading the charge to make solar more accessible. Qualified investors around the country can invest in solar projects on our platform. We’re about to roll out the first ever clean energy IRA. Ordinary Americans have $19 trillion dollars invested in their IRAs, quietly financing the economy of tomorrow. That capital has up to this point been largely locked out of clean energy.

If we take the opportunity to become investors in the clean energy revolution, people like you and me will become owners of the world’s biggest industry. Instead of being on the receiving end of power, we will be, in so many senses, generating power.

Imagine how profound this change will be.

Imagine people everywhere earning a better return on investment in the solar panels on their roof than in the stock market.

Imagine farmers with crops and cattle beneath community-owned windmills.

Imagine billions of dollars per day in profits flowing to homes and businesses instead of big oil and coal companies.

100% is a movement about abundance and possibility. It’s about taking charge of creating the world we all want to see and driving forward the set of solutions we need so our children will inherit a healthier, happier and more prosperous world than the one we were born into.