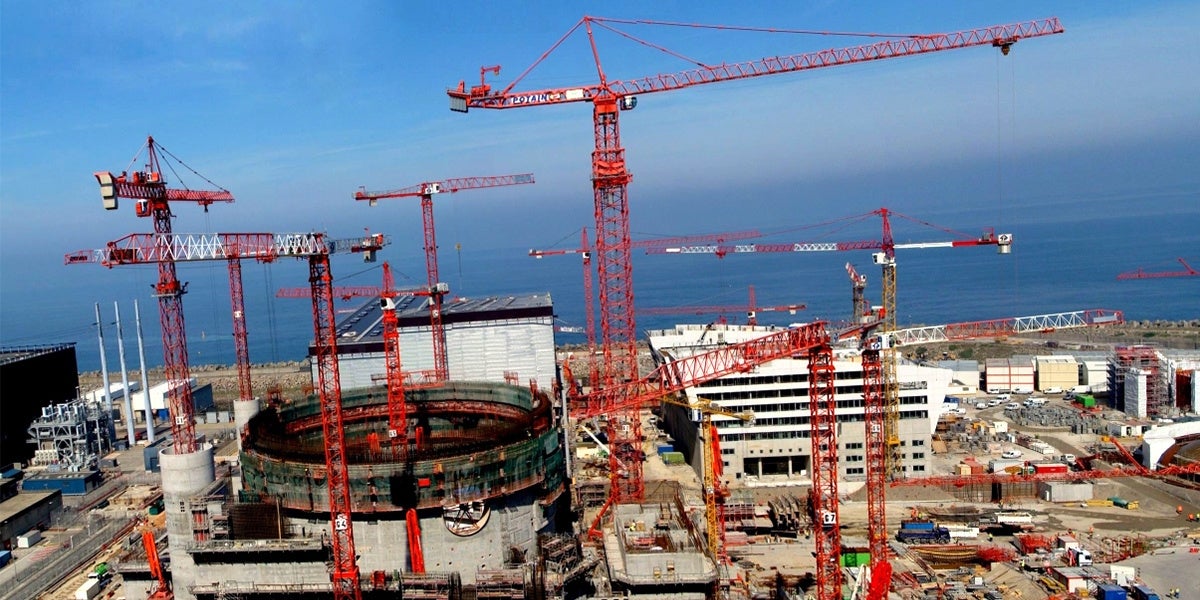 Cheap renewables are mounting a serious challenge to nuclear power, which in 2017 has had a difficult year.

Key projects have been abandoned, costs are rising, and politicians in countries which previously championed the industry are withdrawing their support.

Renewables, on the other hand, especially wind and solar power, have continued to expand at an enormous rate. Most importantly, they have gotten significantly cheaper.

And newer technologies like large-scale battery storage and production of hydrogen are becoming economic, because they harness cheap power from excess renewable capacity.

This latest trend—the production of hydrogen from excess wind and solar power—raises the possibility of replacing natural gas, at least in part, for domestic heating and cooking and for power stations.

Many existing gas pipelines and domestic networks are equally capable of taking natural gas, biogas and hydrogen, or a mixture of all three.

The speed with which the transition is taking place has exceeded all official estimates. In favorable locations across the world, including the U.S., Europe and India, onshore wind and solar farms are the least expensive way of producing electricity.

Even off-shore wind, five years ago more expensive than nuclear power, has developed so quickly that the latest Dutch off-shore farms are to be built without any subsidy at all.

These advances in renewables that are cutting the cost of power are in sharp contrast to continued cost overruns and delays in nuclear power stations.

An analysis of countries’ plans for tackling climate change showed that 108 were looking to expand renewables and just nine wanted to build new nuclear stations.

The biggest single blow to nuclear power’s expansion came in August: two nuclear reactors under construction in South Carolina were abandoned when 40 percent complete. This was a humiliation for the U.S. giant Westinghouse, already in Chapter 11 bankruptcy proceedings to escape its creditors.

The models concerned were its flagship design, AP 1000 pressurized water reactors, which were supposed to spur a nuclear revival. Their cost, already $9 billion, was expected to rise to $25 billion by the time the reactors were completed—three years behind schedule.

This month in the nearby state of Georgia, building work on the only other plants of this design still under construction was allowed to continue despite already accumulated delays and costs. When the project is completed it is expected to increase consumer bills in the state by 10 percent.

The continued difficulties of nuclear power are reflected in the French government’s declared intention to reduce nuclear’s share in electricity generation from 75 percent to 50 percent, by closing old stations and building more renewables.

While it will not close old reactors as fast as it originally intended, France does not plan to build any new nuclear plants beyond the one still awaiting completion at Flamanville, which is years late and over budget.

The South Korean government has similarly been promising to halt nuclear expansion and develop more renewables. Japan, still suffering from the after-effects of the Fukushima nuclear disaster of 2011, is abandoning plans to restart some of its older reactors because of public resistance and the expense of upgrading safety.

Even in China and Russia, where state control means market economics have little effect on decision-making, plans to build more nuclear stations appear to be on hold, although no official statements have been made.

This has not stopped the nuclear industries in all these countries trying to export their technologies—notably to the UK, which is inviting all of them except Russia to build their latest nuclear power station design on its shores. If the plans succeed, the UK would have four different designs.

The most advanced of these, Hinkley Point C in the west of England, is a set of two reactors of similar design to the badly delayed French reactor at Flamanville. It was originally due to be completed by Christmas 2017, but is now scheduled for 2025, although that is now seen as optimistic.

Even the former UK energy secretary Sir Edward Davey, who signed off on the Hinkley Point deal, said “the economics have clearly gone away.” He doubted that the building would ever be completed, he told Greenpeace in an interview.

All the other UK nuclear projects are still at various stages of planning, and how any of them will be paid for is yet to be worked out. It is already clear that none can be financed without government subsidy.

An important political development in 2017 was that for the first time both the U.S. and the UK admitted that their support for the nuclear industry is linked to the need to maintain their military capability in nuclear submarines and personnel. This is key, because both powers have previously claimed that there is no link between civil and military nuclear industries.

Even before their admission it was already clear that the big economies which have no nuclear weapons, like Germany, can see no point in having a civil nuclear industry.

That does not stop smaller countries, some without any nuclear power stations at all at present, from signing agreements with the Russian state-owned company Rosatom. In what many see as a Russian policy to extend its international influence, Rosatom already says it is building reactors in Belarus, China, India, Bangladesh, Hungary, Turkey, Finland and Iran, and is seeking to expand, with tenders in for 23 other reactors abroad.

These include Sudan, where the current president is wanted for war crimes. Whether all the plans will come to fruition remains doubtful.

The claim to a bright future which the nuclear industry clung to for the last 20 years was that the technology produced large quantities of low carbon electricity at a low price—something that intermittent renewables could not do.

In 2017 it is clear this argument has fallen apart. Nuclear is ever more expensive, and the cost is growing, while renewables are getting cheaper all the time.

But perhaps most important is that, with the development of batteries, biogas and hydrogen, the output from renewables can be stored and balanced out. Base load nuclear power is no longer needed.