2019 Was a Big Year for Renewable Energy in New York 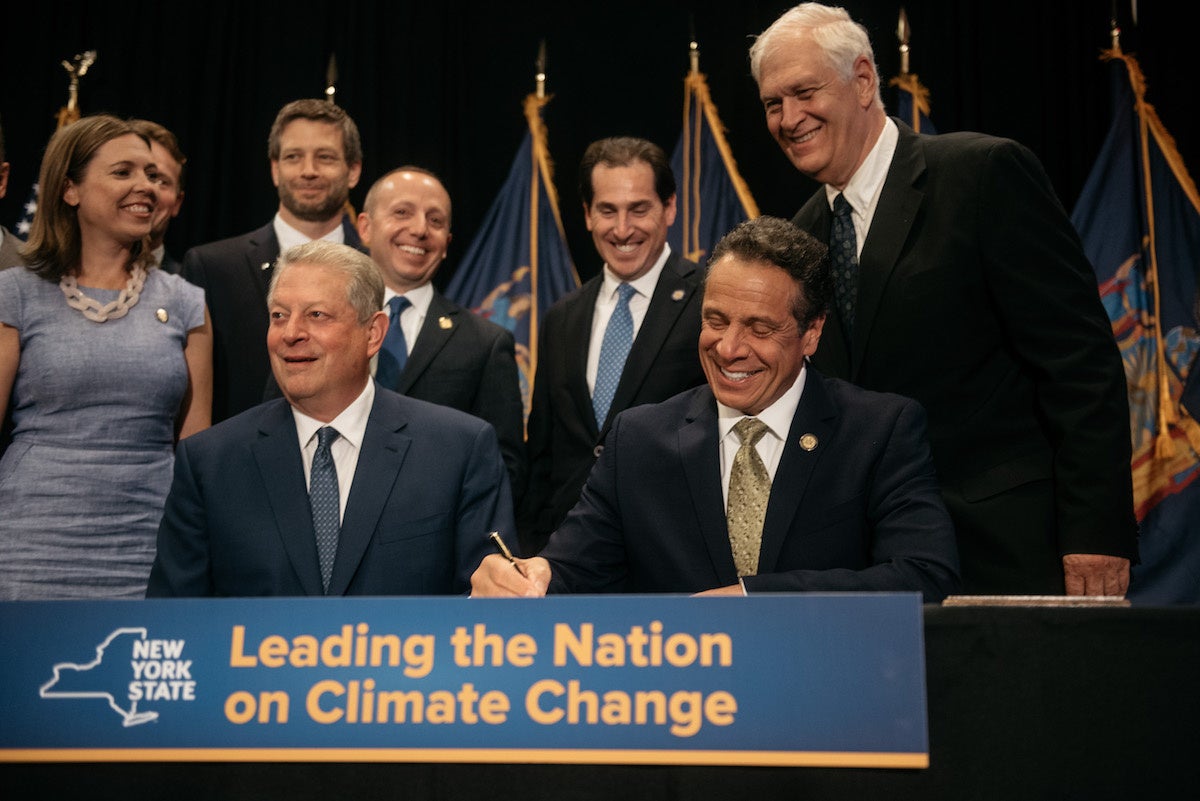 When Governor Cuomo signed the Climate Leadership and Community Protection Act (CLCPA) into law in July 2019, it cemented New York State as a national leader in ramping up clean energy and the broader fight against climate change. In addition to reducing statewide greenhouse gas emissions 40 percent by 2030 and 85 percent by 2050, the law requires that the state obtain 70 percent of its electricity from renewable sources by 2030 (and that it be emissions-free by 2040). No state has a more aggressive emissions reduction target.

Meeting these targets will dramatically reduce fossil fuel generation that harms our health and worsens the effects of climate change while providing important job and grid benefits.

Here’s a look at three key steps the state needs to take to ensure it is on the path to achieving its renewables targets:

1. The PSC Should Act on NYSERDA’s Petition to Boost Local Solar

Even before the CLCPA’s passage, New York was a leader in making solar more accessible to homeowners and businesses. In 2014, Governor Cuomo established NY-Sun, a New York State Energy Research and Development Authority (NYSERDA)-administered program that seeks to add 3,000 MW of installed solar capacity by 2023. The program works by establishing cash incentives for developers that decline over time as solar installations increase in different parts of the state.

The results have been impressive: Almost 1,000 MW of NY-Sun supported projects have been installed, with another 1,000 MW in the pipeline. Just this week, NYSERDA announced New York has surpassed 2,000 MW of installed solar generation (including non-NY Sun projects), enough to power almost 250,000 homes.

In addition to the 2,000 MW of solar that’s been installed, another 1,262 MW of solar is under development, including 351 community solar projects (this week, the Public Service Commission (PSC) approved consolidated billing for these projects, which should spur their deployment in the state).

In November, NYSERDA filed a petition with the PSC seeking 3 million in additional funds to extend the NY-Sun program through 2025. If approved, approximately half of the funds would be added to existing cash incentives to support an additional 1,800 MW of solar projects. About a quarter of the money would be used to replenish “community adder” incentives for community solar projects in certain utility territories, providing additional compensation for these projects.

Importantly, NYSERDA proposes using 5 million of the additional funds to expand NY-Sun programs focused on low-to-moderate income (LMI) customers, as part of a new Framework for Solar Energy Equity. Among other things, the Framework envisions an expansion of its Solar for All program, which provides no-cost community solar to low-income households. It also provides incentives for projects sited on affordable housing, LMI homeowners who install rooftop solar, and projects that pair solar with energy storage. Combining solar and energy storage provides resiliency benefits and can also reduce local air pollutants from fossil fuel peaking units, which are often located in environmental justice communities.

The PSC hasn’t yet acted on NYSERDA’s petition, which sets forth a roadmap for meeting the state’s 6,000 MW goal by 2025.

2. The PSC Needs to Move Quickly to Decarbonize the Power Sector

Achieving 70 percent renewable energy in the power sector by 2030 won’t be easy. Currently, New York gets 28 percent of its total electricity from renewable sources, and the vast majority of this (about 80 percent) comes from legacy large hydropower facilities owned and operated by the New York Power Authority. Scaling up renewables to hit 70 percent in 10 years will require a massive amount of new clean generation to come online.

The first step to make this happen is commencing a proceeding to establish how this process will work, which the CLCPA requires by 2021. There is little time to waste. NRDC, along with a number of other environmental organizations and clean energy industry partners, last week filed a list of eight principles we believe should guide the state through this process. The principles include establishing a full procurement schedule to get to 70 percent renewables by 2030, the creation of new tiers of renewable energy credits for existing renewable energy facilities, and a PSC final implementation order by the end of 2020. This deadline is especially important because it takes approximately four years between the approval of contracts for large-scale renewable projects and their completion and operation (thus, the state will need to approve contracts no later than 2026 for projects to be up and running by 2030).

Reaching the state’s 70 by 30 goal will require that renewables projects are sited quickly and that there is enough transmission to transport this power to where it is needed. Unfortunately, the processes for both need fixing.

The siting process, known as Article 10, establishes a procedure for approving energy production facilities over 25 MW. However, it has not worked well for renewable energy sources like solar and wind. Major delays within the Article 10 process have resulted in a bottleneck jeopardizing over 8,000 gigawatt-hours per year of land-based wind and solar projects pending before the state’s Board on Electric Generation Siting and the Environment (known as the “Siting Board”), which considers these applications. For example, although the Article 10 process should take approximately 24 months, most of the pending renewable projects have taken much longer and most are still waiting for approval or have been withdrawn.

There are a number of steps the Department of Public Service (DPS) can take to improve Article 10, including enforcing application deadlines, completing compliance reviews on a fixed timeline, and reducing reliance on paper by expanding the use of digital technologies. To its credit, DPS has increased its staff to process these applications, and last week the Siting Board approved the Bluestone Wind Farm, a 124 MW project located in upstate New York, in the process overruling a local law that had placed a moratorium on wind turbines. This follows approval of three other renewable projects in the last four months after only one had been approved since 2011. While these approvals are encouraging, the pace of the approval process must be dramatically increased to meet our 2030 goal.

Similarly, the process for constructing transmission lines to carry electricity from generation to end use must also be streamlined. As I wrote in April, the approval process needed to integrate clean energy was adopted under a 2011 order from the Federal Energy Regulatory Commission (FERC), which regulates interstate transmission of electricity. FERC’s Order 1000 requires the New York Independent System Operator (NYISO) and other grid operators to develop a process to consider transmission needs driven by public policy requirements established by federal or state laws or regulations (such as New York’s Clean Energy Standard) in the local and regional transmission planning process.

This year, NYISO announced the selection of two transmission projects that will enable the delivery of power from generating facilities in upstate New York, including significant amounts of renewable energy, to downstate population centers like New York City. This was an important milestone, and just the second and third time that so-called “public policy” transmission upgrades have been approved. However, the state will need more such upgrades to handle the coming influx of wind and solar power.

New York accomplished a great deal in 2019, with the adoption of aggressive renewables targets that reflect the state’s role as a leader on climate and clean energy. The state must take key steps in 2020 to ensure that these goals remain within reach.