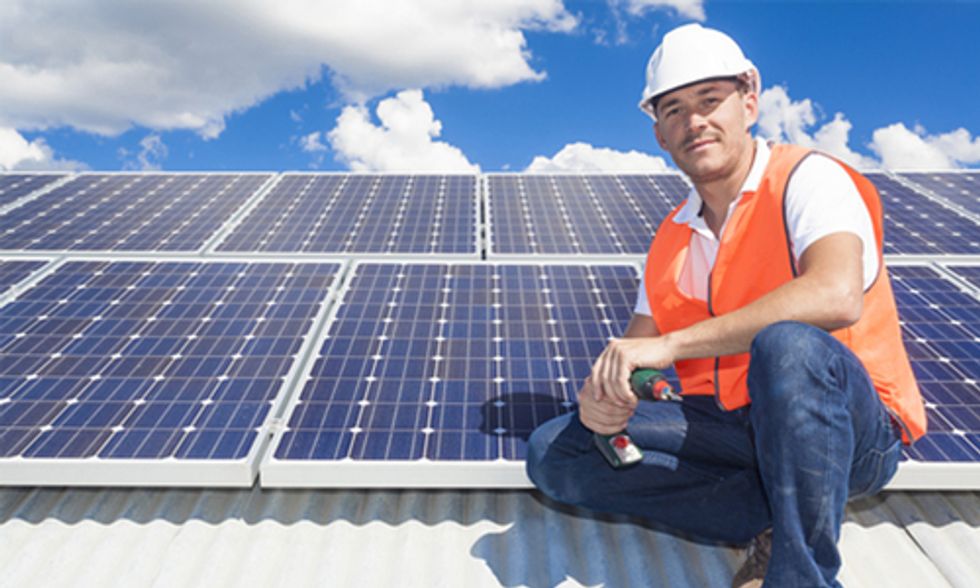 Solar energy is a job creator, with more than 5,300 jobs announced in the second quarter of 2014. Photo credit: Shutterstock

While the coal and fracking industries try to make their case with an emotional appeal to anxious workers, saying that regulating these industries will cost jobs in a still-struggling economy (and despite record declines in mining jobs due to mechanization), the report shows that the new energy technologies are a growth area for labor.

"Clean Energy Works for Us: Second Quarter 2014 Report" says 12,500 new jobs were announced in the areas of clean energy and clean transportation, double the number in the first quarter. It says:

Solar power generation led all sectors in Q2 with more than 5,300 jobs announced, and the wind industry announced more than 2,700 jobs, many stemming from projects that qualified for the recently expired Production Tax Credit (PTC). Other major announcements came from electric car manufacturers Tesla and General Motors.

While celebrating the findings, the group warns that policy uncertainty—measures such as Ohio's freeze and possible repeal of its clean energy standards—could put a damper on growth.

"This Labor Day weekend, the story is that more Americans are working because of clean energy," said E2 executive director Bob Keefe. "But to keep that growth going, we need our state and federal leaders to do their jobs too. We need them to support smart policies that grow our economy and protect our environment— policies like the federal Clean Power Plan."

That plan, announced by the U.S. Environmental Protection Agency in June, cuts carbon from power plants by 30 percent by 2030. That policy could create hundreds of thousands of jobs in renewable energy along the way.

Wind Power Monthly reports a similar optimistic take on worldwide job opportunities in clean energy while issuing a similar caveat in an article "The Challenge of Wind Recruitment."

In interviews, three wind energy executives pointed to the growing need for skilled workers in their field. In the article, Eddie Halkett, group business development director for energy company EarthStream said that continued growth in wind energy could produce as many as 2.6 million jobs worldwide by 2030.

"The challenge is to establish and preserve a sustainable, international skills market that does not fluctuate and decline as a result of inconsistent investment, political interference and fierce competition from other subsidised energy sources," he said.