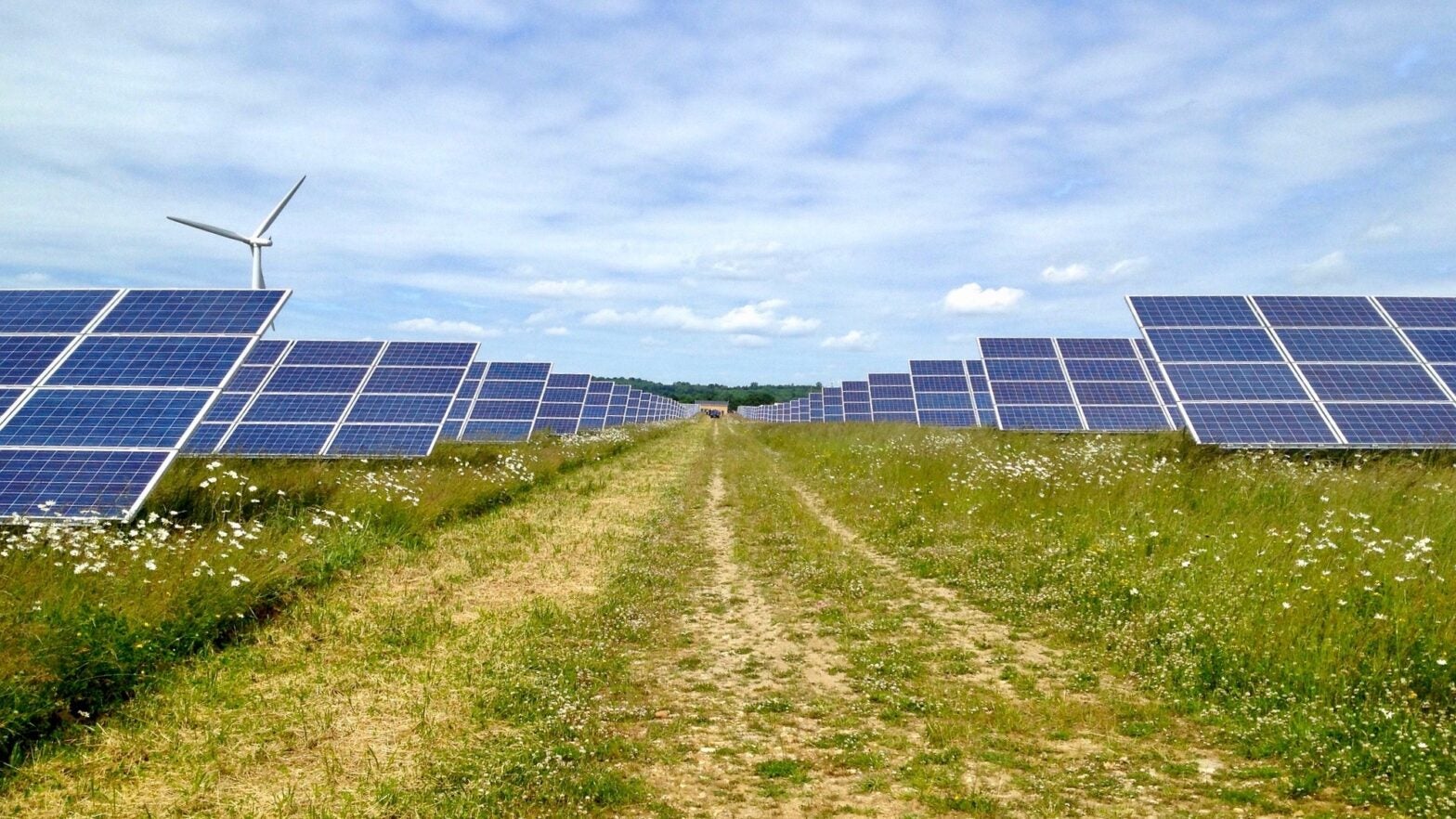 During the three months of July, August and September, renewables generated an estimated total of 29.5 terawatt hours (TWh), compared with just 29.1TWh from fossil fuels, the analysis shows.

This is the first-ever quarter where renewables outpaced fossil fuels since the UK’s first public electricity generating station opened in 1882. It is another symbolic milestone in the stunning transformation of the UK’s electricity system over the past decade.

Nevertheless, a lack of progress in other parts of the economy means the UK remains far off track against its upcoming legally-binding carbon targets, let alone the recently adopted goal of net-zero greenhouse gas emissions by 2050.

Quarterly electricity generation in the UK between 2009 and the third quarter of 2019, in terawatt hours, with fossil-fuel output shown with a blue line (coal, oil and gas) and renewables shown in red (wind, biomass, solar and hydro). Source: BEIS Energy Trends and Carbon Brief analysis of data from BM Reports. Chart by Carbon Brief using Highcharts

The chart above shows that electricity generation from fossil fuels has halved since 2010, from 288TWh down to 142TWh in the most recent 12-month period.

Gas now contributes the vast majority of that shrinking total, as coal plants close down ahead of a planned phaseout in 2025. These ageing power stations were mostly built in the 1960s and 70s and are increasingly uneconomic to run due to CO2 prices, market forces and pollution rules.

In the third quarter of 2019, some 39 percent of UK electricity generation was from coal, oil and gas, including 38% from gas and less than 1 percent from coal and oil combined.

Another 40 percent came from renewables, including 20 percent from wind, 12 percent from biomass and 6 percent from solar. Nuclear contributed most of the remainder, generating 19 percent of the total.

While it is unlikely that renewables will generate more electricity than fossil fuels during the full year of 2019, it is now a question of when – rather than if – this further milestone will be passed.

This summer, National Grid predicted that zero-carbon sources of electricity – wind, nuclear, solar and hydro, but not biomass – would generate more electricity than fossil fuels during 2019. Carbon Brief’s analysis through to the third quarter of the year is in line with this forecast.

These schemes add to the more than 2,100MW of offshore capacity that started operating during 2018. Further capacity is already being built, including the 714MW East Anglia One project that started generating electricity this year and will be completed in 2020.

In total, government contracts for offshore wind will take capacity from nearly 8,500MW today to around 20,000MW by the mid-2020s. The government and industry are jointly aiming for at least 30,000MW of offshore wind capacity by 2030, with two further contract auctions already expected.

In September, the latest auction round produced record-low deals for offshore wind farms that will generate electricity more cheaply than expected market prices – and potentially below the cost of running existing gas plants.

Other contributors to the recent increase in renewable generation include the opening of the 420MW Lynemouth biomass plant in Northumberland last year and the addition of hundreds of megawatts of new onshore wind and solar farms. (Another new 299MW biomass plant being built on Teesside, with a scheduled opening in early 2020, is facing “major delays”.)

According to the Department of Business, Energy and Industrial Strategy (BEIS), the rise in renewable output during the first half of 2019 was down to these increases in capacity, with weather conditions not unusual for the time of year.

Some two-thirds of electricity generated from biomass in the UK comes from “plant biomass”, primarily wood pellets burnt at Lynemouth and the Drax plant in Yorkshire. The remainder comes from an array of smaller sites based on landfill gas, sewage gas or anaerobic digestion.

The Committee on Climate Change says the UK should “move away” from large-scale biomass power plants, once existing subsidy contracts for Drax and Lynemouth expire in 2027.

Using biomass to generate electricity is not zero-carbon and in some circumstances could lead to higher emissions than from fossil fuels. Moreover, there are more valuable uses for the world’s limited supply of biomass feedstock, the CCC says, including carbon sequestration and hard-to-abate sectors with few alternatives.

In terms of fossil-fuel generating capacity, the UK’s remaining coal plants are rapidly closing down, well ahead of a 2025 deadline to phase out unabated burning of the fuel. By March 2020, just four coal plants will remain in the UK.

Utility firms have plans to build up to 30,000MW of new gas capacity – including 3,600MW at Drax recently given government planning approval – despite the fact that government projections suggest only around 6,000MW might be needed by 2035.

It is unlikely that all of the planned new gas capacity will get built. The schemes are generally reliant on winning contracts under the UK’s capacity market, which is designed to ensure electricity supply is always sufficient to meet demand.

The rise of renewables means that gas generation is likely to continue falling in the UK, whether or not this new capacity gets built. Nevertheless, the UK is unlikely to meet its legally binding goal of cutting overall emissions to net-zero by 2050, unless progress in the electricity sector is matched by reductions in other parts of the UK economy, such as heating and transport.

Cumulative count of days each year when electricity generation from renewables was higher than that from fossil fuels. Prior to 2015 there were no days when renewables outpaced fossil fuels. Source: Carbon Brief analysis of data from BEIS Energy Trends and BM Reports. Chart by Carbon Brief using Highcharts.

The figures in the article are from Carbon Brief analysis of data from BEIS Energy Trends chapter 5 and chapter 6, as well as from BM Reports. The figures from BM Reports are for electricity supplied to the grid in Great Britain only and are adjusted to include Northern Ireland.

In Carbon Brief’s analysis, the BM Reports numbers are also adjusted to account for electricity used by power plants on site and for generation by plants not connected to the high-voltage national grid. This includes many onshore wind farms, as well as industrial gas combined heat and power plants and those burning landfill gas, waste or sewage gas.

By design, the Carbon Brief analysis is intended to align as closely as possible to the official government figures on electricity generated in the UK, reported in BEIS Energy Trends table 5.1. Briefly, the raw data for each fuel is adjusted with a multiplier, derived from the ratio between the reported BEIS numbers and unadjusted figures for previous quarters.

Carbon Brief’s method of analysis has been verified against published BEIS figures using “hindcasting“. This shows the estimates for total electricity generation from fossil fuels or renewables to have been within ±3% of the BEIS number in each quarter since Q4 2017. (Data before then is not sufficient to carry out the Carbon Brief analysis.)

For example, in the second quarter of 2019, a Carbon Brief hindcast estimates gas generation at 33.1TWh, whereas the published BEIS figure was 34.0TWh. Similarly, it produces an estimate of 27.4TWh for renewables, against a BEIS figure of 27.1TWh.

The Carbon Brief estimated totals for fossil fuels and renewables are very close in Q3 2019, coming within 0.5TWh of each other. This means that despite the relatively low level of uncertainty in the estimates, their relative position could be reversed in the official BEIS data.

This serves to emphasize the fact that the broader trend of decline for fossil fuels and an increase for renewables is of far greater significance than the precise figures for any individual quarter.

In contrast to Carbon Brief’s analysis, figures published by consultancy EnAppSys for the third quarter of 2019 suggest that fossil fuels generated slightly more electricity than renewables. There are several reasons for this difference.

Third, Carbon Brief’s analysis is, by design, aligned with the quarterly BEIS Energy Trends data for electricity generation, whereas EnAppSys uses its own approach.

For comparison, EnAppSys reported for the second quarter of 2019 that 28.3TWh was supplied in GB from gas, whereas BEIS reports that 34.0TWh was generated in the UK. Similarly EnAppSys reported 23.1TWh coming from renewables, against a BEIS figure of 27.1TWh.