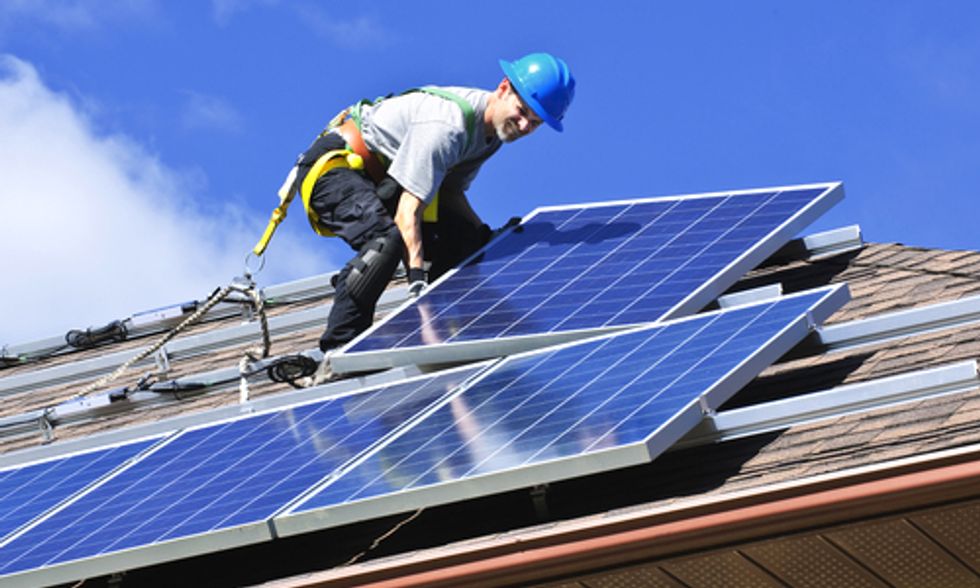 A new study by the UK's Energy Research Centre (UKERC) took a deep dive into job creation claims made by proponents of renewable energy and energy efficiency, looking at the figures and projected figures for the EU from a number of angles. It came to the conclusion that in the short run, moving to renewables and ramping up energy conservation would create more jobs than the fossil fuel sector, at a rate of about one job per gigawatt hour of electricity saved or generated by a clean energy source, with the long-term picture murkier because of factors in the economy and government policy that are hard to predict.

The report, Low Carbon Jobs: The evidence for net job creation from policy support for energy efficiency and renewable energy, said, "‘Green’ sectors account for as many as 3.4 million jobs in the EU, or 1.7 percent of all paid employment, more than car manufacturing or pharmaceuticals. Given the size of the green jobs market, and the expectation of rapid change and growth, there is a pressing need to independently analyse labour market dynamics and skills requirements in these sectors. What is more controversial is the question of whether policy-driven expansion of specific green sectors actually creates jobs, particularly when the policies in question require subsidies that are paid for through bills or taxes. Politicians often cite employment benefits as part of the justification for investing in clean energy projects such as renewables and energy efficiency. However, other literature is more sceptical, claiming that any intervention that raises costs in the energy sector will have an adverse impact on the economy as a whole."

The report focused not simply on job creation, but on net job creation, subtracting the number of fossil fuel-based jobs that could potentially be displaced by spending on green infrastructure projects. It also employs "counterfactuals": what other power generation sources would have been built instead without green policies. It says that over-optimistic green jobs figures don't take this into account. But it also says that jobs skeptics tend to be overly broad in their application of counterfactuals.

"There is a reasonable degree of evidence that in general, renewable energy and energy efficiency are more labor-intensive in terms of electricity produced than either coal- or gas-fired power plant," the report said. "This implies that at least in the short-term, building new renewable generation capacity or investing in greater energy efficiency to avoid the need for new generation would create more jobs than investing in an equivalent level of fossil fuel-fired generation. ... Therefore, if investment in new power generation is needed, renewables and energy efficiency can contribute to short-term job creation so long as the economy is experiencing an output gap, such as is the case during and shortly after recession.  However, long-term impacts will depend on how these investments ripple through the economy, and in particular the impact on disposable household incomes."

In the end, moving to clean energy sources is about much more than job creation as Simon Evans at The Carbon Brief notes in his analysis of the report and breakdown of its complex models.

"Ultimately though, the UK is attempting to decarbonize because of the risks of unmanaged climate change—not because of green job creation," he saids. "The UKERC report reveals the limitations of jobs creation studies, but doesn't change that ultimate rationale for low-carbon policy."