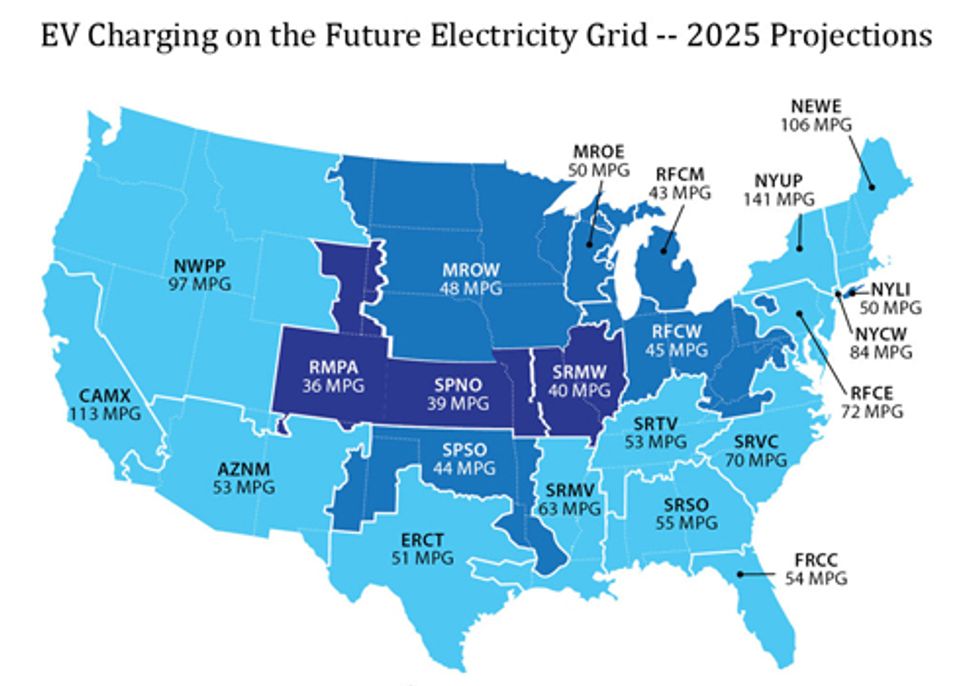 The longer you own an electric vehicle, the lower its global warming emissions are likely to become. Why? As some of the oldest, dirtiest coal plants are being retired and investments in renewable electricity increase, the global warming emissions that result from generating a given amount of electricity are estimated to fall nationwide by an average of about 13 percent by 2025.

That means, for 70 percent of Americans, charging their electric vehicle (EV) on the regional electricity grid in 2025 would result in lower global warming emissions than even today’s most efficient gasoline hybrid, the 50 mpg Prius. While that’s good news, it could be even better. By investing in more renewables and retiring more coal plants over the next decade, using electricity as a transportation fuel would deliver even greater global warming benefits than projected.

How will changes in the grid affect the emissions from charging an EV?

To get an idea of how emissions from charging an EV may change in the coming years, I looked to the Annual Energy Outlook updated most recently in June of this year by the U.S. Energy Information Administration (EIA). The outlook projects changes in the electricity grid expected in the coming years as a result of varying energy demand, regulatory drivers, expected power plant retirements and other factors.

Using the same well-to-wheels methodology used in our State of Charge report (more on this in the notes below), and the Annual Energy Outlook’s projections for 2025, I estimated how the emissions from charging an EV powered by the grid in 2025 compare to the emissions of a gasoline vehicle. I did this analysis across each of the grid regions across the United States, excluding Hawaii and Alaska for which projections were unavailable.

For each region, I show the miles per gallon that a gasoline vehicle would need to achieve to have emissions similar to an EV powered on the electricity grid (see the map below). For example, charging an EV in Massachusetts on the 2009 regional (NEWE) electricity grid (the most recent year for which we have data) would create about the same global warming emissions as driving a gasoline vehicle that gets 75 mile per gallon. That’s better than any gasoline or hybrid vehicle on the market. In 2025, as the grid in Massachusetts gets cleaner, that same electric vehicle would be responsible for about the same emissions as a gas-powered vehicle with the astounding fuel economy of 106 mpg.

The maps show how EV emissions stack up across the country, with current data and projecting to 2025. Both maps stick with the same GOOD, BETTER, BEST ratings we used in State of Charge, where BEST means an EV has lower emissions than the even the most fuel efficient gasoline hybrid available today (50 mpg). By 2025, four additional regions move into the BEST category and another three move from GOOD to BETTER. A closer look at the map reveals the change in mpg ratings, and shows every regional electricity grid getting cleaner between 2009 and 2025

These national figures are positive, but they don’t reflect the magnitude of what’s happening in many regions.

For example, the California grid region is expected to reach 35 percent of its electricity from renewables by 2025, a large change prompted by a strong state Renewable Electricity Standard (RES). As a result, the mpg equivalent of an EV in California is well over 100 mpg by 2025.

In contrast, the Rocky Mountain grid region (RMPA on the map) also sees relatively strong growth in renewable electricity, increasing to about 17 percent of its electricity generation by 2025 from about 10 percent in 2009. But the region remains in the GOOD category as a result of a continued reliance on coal for the vast majority of its electricity needs.

The future has yet to be written

Clean electricity policies are driving the grid in the right direction, meaning an EV bought today is likely to have lower global warming emissions over time.

Some regions are lagging behind, but we have opportunities to change that. In Michigan, currently classified as a GOOD region, a renewable energy standard is likely headed for the ballot this fall. According to a letter from experts across Michigan, the 25 percent renewable electricity by 2025 standard will not only reduce global warming emissions, but will create jobs, reduce air pollution, and boost the state’s economy.

State and federal renewable energy policies are critical for cleaning up the grid and unleashing the full potential of EVs. The future state of charge looks strong, and with the right policies in place will only get better.

Some notes on the analysis: