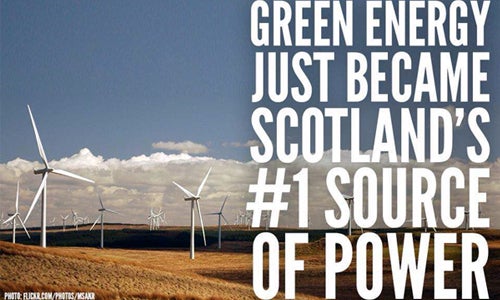 Clean, renewable energy sources are now Scotland’s number one source of power, according to new figures from the UK’s Department of Energy and Climate Change and reported in Scotland’s daily paper The Scotsman. The figures, which include solar, wind, hydro and biomass, showed that renewable energy generated 32 percent more electricity than any other single source in the first half on 2014. Renewable energy sources produced a record 10.3 terawatt-hours of power, compared to 7.8TWh from nuclear, 5.6TWh from coal and 1.4TWh from gas-fired power stations during that same time. 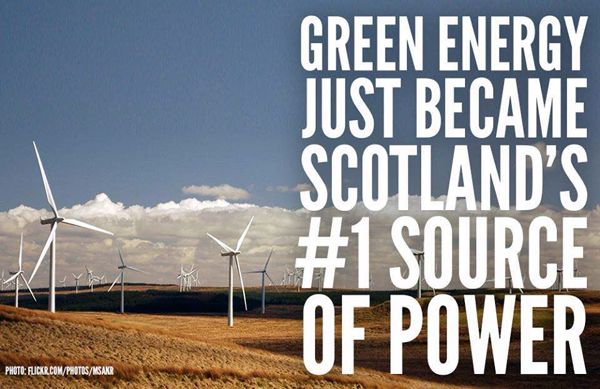 “We have joined the pioneer nations who are leading the way to a 100 percent renewables, zero-carbon world,” Dr Richard Dixon, director of Friends of the Earth Scotland, told The Scotsman. “Becoming the largest single source of electricity in Scotland is a tremendous milestone on the way to meeting all of our electricity demand from green energy sources in just six years’ time. Wind turbines in Scotland alone generated enough electricity to supply three million homes in the UK—equivalent to 126 percent of the electricity needs of every home north of the Border.”

Nuclear was previously the nation’s primary source of electricity but, as WWF Scotland director Lang Banks pointed out, “Last month, while nuclear reactors were forced to shut because of cracks, Scotland’s renewables were quietly and cleanly helping keep the lights on in homes across the country.

While Linda Holt of Scotland Against Spin, a group that aims to protect the rural landscape from wind turbines and the country from “the government’s unsustainable wind energy policy,” said that wind is unreliable and expensive and “directly responsible for plunging Scots into fuel poverty,” Niall Stuart, chief executive of industry group Scottish Renewables hailed the news.

“The announcement that renewables have become Scotland’s main source of electricity is historic news for our country and shows the investment made in the sector is helping to deliver more power than ever before to our homes and businesses,” he said. “This important milestone is good news for anyone who cares about Scotland’s economy, our energy security and our efforts to tackle climate change. Every unit of power generated from renewables means less carbon emitted from the burning of fossil fuels, decreases our reliance on imported energy and supports jobs and investment in communities across Scotland.”

“The fact that energy from renewables has exceeded that from nuclear in the first half of 2014 highlights the vast potential of renewable generation to provide a safe, secure and cost-effective means of electricity generation for this country, together with appropriate levels of thermal generation,” Scottish energy minister Fergus Ewing told the BBC.