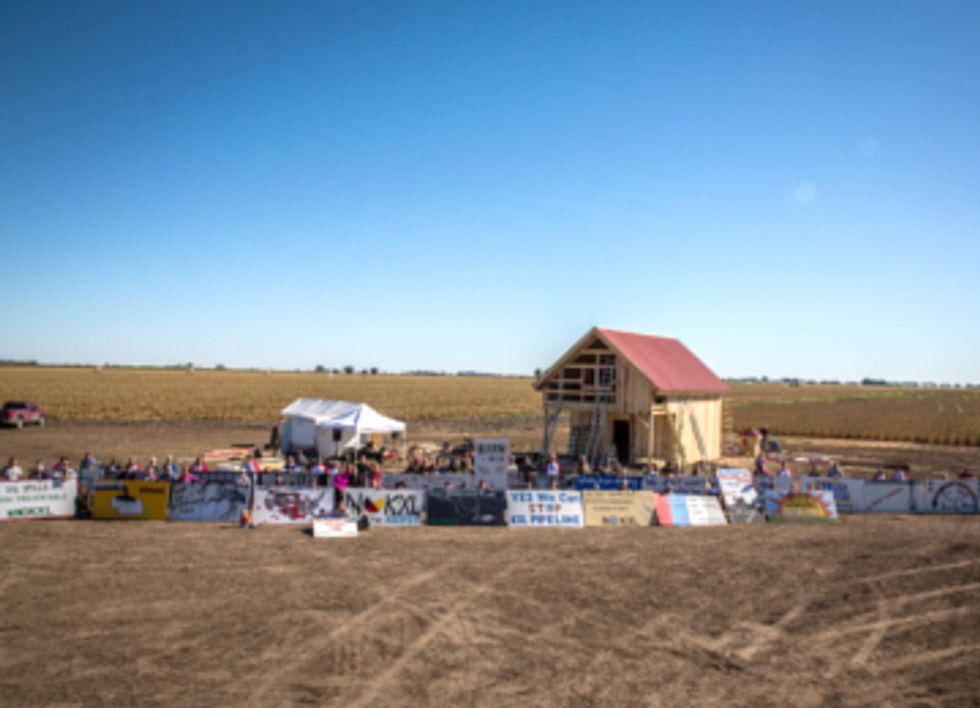 A solar- and wind-powered barn built by volunteers on land directly inside the proposed route of TransCanada's Keystone XL pipeline was dedicated on Sunday, in a ceremony near tiny Benedict, NE, that drew 200 people and featured speakers including energy investor and philanthropist Tom Steyer.

Many at the dedication ceremony were volunteers who had joined in a four-day community barn-raising to construct the Build Our Energy Barn. Led by Bold Nebraska with partners Nebraska Farmers Union, 350.org, CREDO and the Sierra Club, the Build Our Energy Barn is to be an educational resource; a place where the community can learn and discover sustainable energy alternatives that serve to benefit the agricultural industry. Wind and solar energy are much more than just viable, renewables are an ecological and economic necessity that builds—not threatens—our communities.

The barn is located on land near York, NE, that has been stewarded by the Hammond, Harrington & Kleinschmidt family for six generations.

"As a Nebraska farmer and rancher, I know just how challenging it is to produce the food that sustains us," said Meghan Hammond, a sixth-generation family farmer on whose land the barn was built. "Climate change has already disrupted other farmers and my ability to supply nutritional sustenance that all of our families rely on."

"The last thing we needed was a pipeline that threatened and compromised resources that we depend on season after season, generation after generation," concluded Hammond.

Due to the location of the Build Our Energy Barn, should President Obama ultimately approve a permit for Keystone XL, TransCanada will either have to reroute the pipeline, or demolish a community-serving, sustainable energy structure.

The Harrington sisters—Abbi Kleinschmidt, Terri, and Jenni—pose with philanthropist and anti-KXL activist Tom Steyer on their family land after the dedication ceremony for the Build Our Energy solar- and wind-powered barn that now stands on the proposed route of the Keystone XL pipeline.
Photo credit: Mary Anne Andrei/ Bold Nebraska

"Investing in local and clean energy is what builds communities and our nation," said Tom Steyer, energy investor. "President Obama has a clear choice, do we build our clean and local energy, or do we allow a foreign corporation to use our land and risk our water for their bottom line. Our President must put our national interest over TransCanada's interest to expand and export tar sands."

The Build Our Energy barn project was funded with $65,000 raised from more than 1,200 online donors, and constructed by volunteers across two weekends this month. In addition to raising the barn, volunteers also painted "#NoKXL" billboards to place with landowners along the proposed pipeline route.