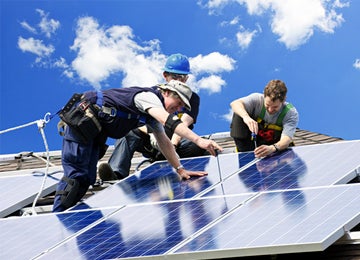 As the American economy begins to recover, some might argue that renewable energy has played a role. In Massachusetts, the clean energy industry has caused significant growth. Jobs in the state’s clean energy sector have increased by 24 percent since 2011, according to the latest report from the Massachusetts Clean Energy Center (MassCEC). 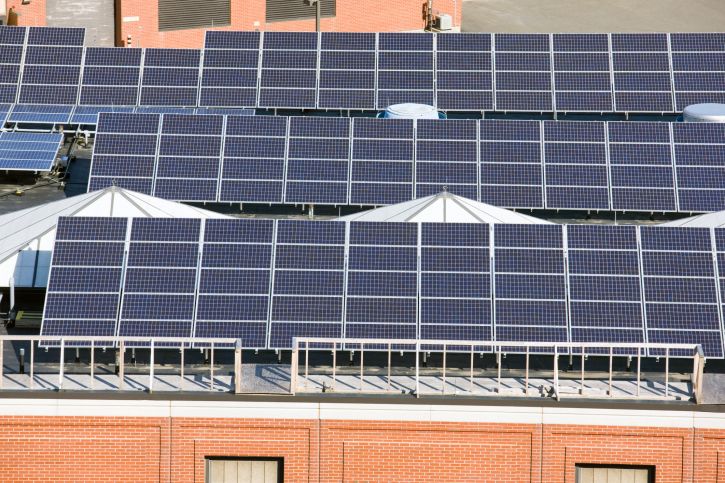 Now almost 80,000 people are employed by the state’s clean energy industry with jobs focused on renewable energy, carbon management, alternative transportation and related technologies. About 30,000 of these employees work specifically with green energy according to the report.

MassCEC predicts that Massachusetts will continue to see strong growth over the next year. In fact, it estimates the renewable energy sector will see the job market grow another 11.1 percent, which would bring the clean energy workforce to a whopping 88,000 people.

Solar energy seems to be the biggest economy booster in Massachusetts. According to the Boston Globe, about 12,550 of all the renewable jobs in the state come from the solar market. The state has implemented incentive programs to encourage solar growth and has even set a goal to reach 1,600 megawatts (MW) of solar capacity by 2020—enough to power 400,000 homes. As of Sept. 1, Massachusetts had 311 MW of installed solar energy.

Wind power has also been the beneficiary of government incentives, but has seen slightly smaller growth, with just 100 MW of installed wind capacity by the end of 2012, according to the U.S. Department of Energy. However, the state has a goal to increase its capacity to 2,000 MW by 2020. The wind industry employs about 2,300 in Massachusetts.

Although not as highly thought of in the renewable energy world, hydropower plays a big role in clean energy jobs within the Bay State. It employs about 2,700 Massachusetts residents, including those involved with tidal or wave technologies. Hydropower accounts for 13.2 percent of Massachusetts’ energy in the winter and 14.2 percent in the summer, according to the state’s Office of Energy and Environmental Affairs. 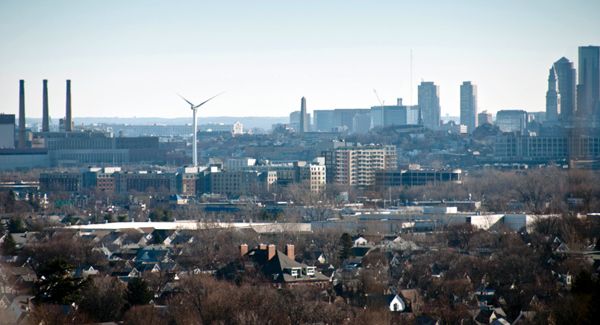 Boston’s first commerical wind tower within city limits. This turbine helps the Local 103 of the International Brotherhood of Electrical Workers become familiar with wind power while displaying wind power to thousands of commuters.

In the midst of worldwide hype about reducing pollution and switching to green energy, Massachusetts is leading the way toward a sustainable future. While many states may tout renewable energy expansions, not everyone can boast the clean energy job growth Massachusetts has experienced. Three things can be attributed to the significant growth seen within the state.

The government hasn’t focused on building up just one type of renewable energy generation. It’s set concrete goals and deadlines to boost the state’s capacity of both wind and solar energy separately, allowing it to have a diversified energy portfolio. This is different from many other states that lump all forms of renewable energy into one category. For example, Texas’ Renewable Portfolio Standard mandated that the state generate 10,000 MW of renewable energy by 2025. However, only wind energy took off in the state. Now it has more than 12,000 MW of wind power but hasn’t taken advantage of its sun-filled skies nearly as much as it could.

The state of Massachusetts offers plenty of incentives to make installing renewable energy an affordable option. It offers rebates for residential or commercial customers who install solar panels, tax deductions and exemptions for wind, hydro or solar installations as well as a number of grants and utility renewable energy rebate programs.

It’s no secret that investors are looking to capitalize on the renewable energy craze. In fact, worldwide, clean energy project financing grew by 404 percent between 2011 and 2012, according to MassCEC. In 2012, the state received about $312 million from outside investors for clean energy projects. One could argue that both the diversified portfolio and government incentives were keys in attracting investors.

Paul Batistelli freelances in the energy field for the promotion of a greener society and energy means. He works to raise awareness on ecological issues, energy dependency, and reducing carbon footprints.