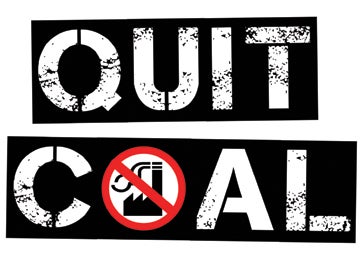 Activists from across the world came together this past Saturday to be part of a global movement calling for an end to the age of coal and standing together for a clean energy future. 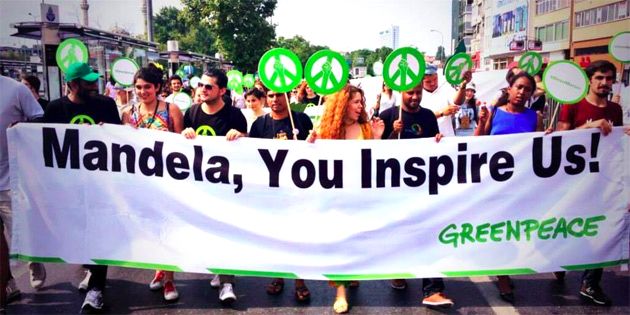 In Istanbul, youth activists attending Global Power Shift joined local groups to march the streets calling for an end to the age of coal. Photo courtesy of Greenpeace International.

From the U.S. to the Philippines, Australia to Turkey and South Africa to Italy; Local, national and international organizations came together with individuals in the streets to stand against the world’s dirtiest form of energy, which has dominated the energy sector for too long.

In Turkey, youth activists from across the globe attending Global Power Shift, joined with local groups in Istanbul, carrying a banner which read “Mandela, You Inspire Us” in tribute to the former South African president, they marched through the city’s streets.

Meanwhile in South Africa, more than 100 activists met in Johannesburg’s Gandhi Square with a symbolic anti-coal installation calling on the government to unplug coal power. 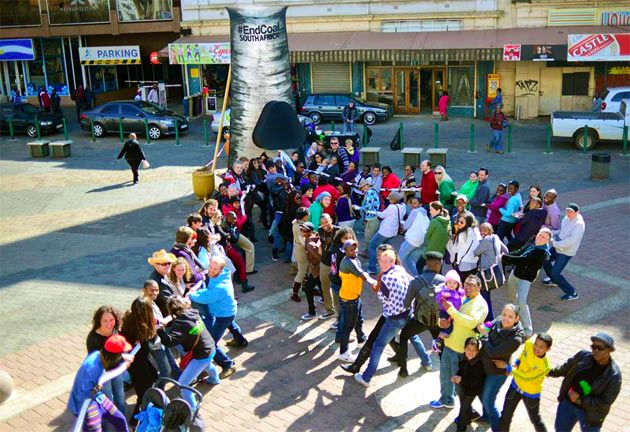 Protestors in South Africa call on the government to unplug from coal. Photo Courtesy of Greenpeace South Africa.

In Italy, Greenpeace activists displayed a huge floating banner reading “No Carbone—Quit Coal” in the sea alongside the Enel coal power station in Civitapvecchia, close to Rome, while an installation on dry land aimed to highlight the human impacts of the coal industry.

And in India, the day of action brought groups together from across the Vidharbha region affected by coal mining to share their frustrations, and come up with ideas on how to help each other to end the age of coal in their communities.

Burning coal remains the biggest contributor to climate change, which is already causing devastation and human suffering around the globe as intense storms, droughts and water shortages hit.

This year, the world passed a historic milestone, as concentrations of greenhouse gases passed the 400 parts per million threshold—reaching levels not seen for 3 million years.

Meanwhile, organizations from the World Bank to the International Energy Agency have warned against the impact that continued investments in fossil fuels would have on the planet, and health professionals continue to warn about the health impacts of coal—what they have named, “the silent epidemic.” 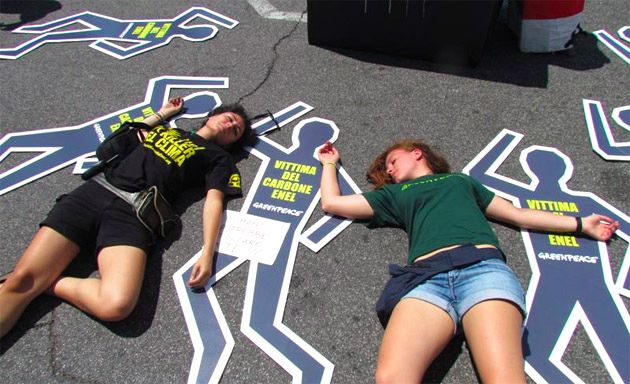 In Italy local groups highlighted the health risks of coal in their protests. Photo courtesy of Greenpeace Italy.

Despite such warnings, 1,200 new coal plants and mega coal mines are planned in countries across the world including China, India, Australia, Indonesia, the U.S., Poland and Germany. If allowed to go ahead, these could push the planet beyond the point of no return.

This weekend, activists showed they would not longer stand by allow the advancement of coal to threaten their futures. Standing together, they called for an end to the use of the dirty fuel and to put pressure on governments to switch to clean, sustainable, renewable energy.

The day of action was supported by a coalition of more than 50 national and international organizations that span the globe, including Greenpeace, 350.org, Avaaz, CoalSwarm.org, Environmental Justice Organisations, Liabilities and Trade, Friends of the Earth International and Sierra Club’s International Climate Program.

Visit EcoWatch’s COAL and RENEWABLES pages for more related news on this topic.