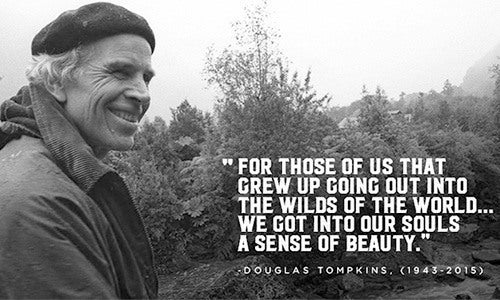 Seven years ago, I found myself on a two-person airplane flown by Doug Tompkins, as he gave me an aerial tour of one of the protected areas he and his wife Kris had preserved in Chilean Patagonia. I remember the plane being tiny and almost as transparent as Wonder Woman’s and I remember it was perhaps the most breathtaking place I’d ever seen.

I’d come to Patagonia to work with Doug and his team on one of his famous coffee table books about environmental issues, this one on mountaintop removal coal mining, Plundering Appalachia. He’d approached me about doing the book after seeing me give a Google Earth virtual flyover of mountaintop removal. Soon after that, I found myself in the wilds of Patagonia, staying with Doug and Kris, enjoying their legendary hospitality, meeting an ever-changing cast of visitors (I was told I’d just miss Julia Roberts and her family by a day) and working long days and nights on the book with Tom Butler, George Wuerthner and Doug.

Thank you, Doug Tompkins, for inspiring us to find beauty in everything. Our thoughts are with @thenorthface family. pic.twitter.com/sUWJMnT0go

Doug was involved in selecting and editing every image and word in that book and I got the impression he approached everything that way, a combination of vast, far-reaching vision with precise attention to the smallest detail. He was both a lofty intellectual and a very practical, hands-on maker of things—businesses, national parks, films, coffee table books. While he wasn’t afraid of public opinion, he was also very focused on shifting it, hence the books and his large publishing operation at the Foundation for Deep Ecology. And somehow his politics seemed simultaneously radical and pragmatic, not just putting forward grand, seemingly impossible ideas, but actually bringing them to life and making them a reality.

Most importantly though, he fiercely loved this planet and the people who were fighting for it. On my visit to Chile, Patagonia founder Yvon Chouniard was also there—they were in their sixties by then and about to embark on another big climb for the film 180 Degrees South, which retraces Doug and Yvon’s now-legendary 1968 journey to Patagonia. Doug lived the slogan that he’s credited with developing for North Face—”never stop exploring.”

Many of you knew Doug much better than I, but I feel fortunate to have spent a little of my time here on Earth with him. Farewell to one of the greats.