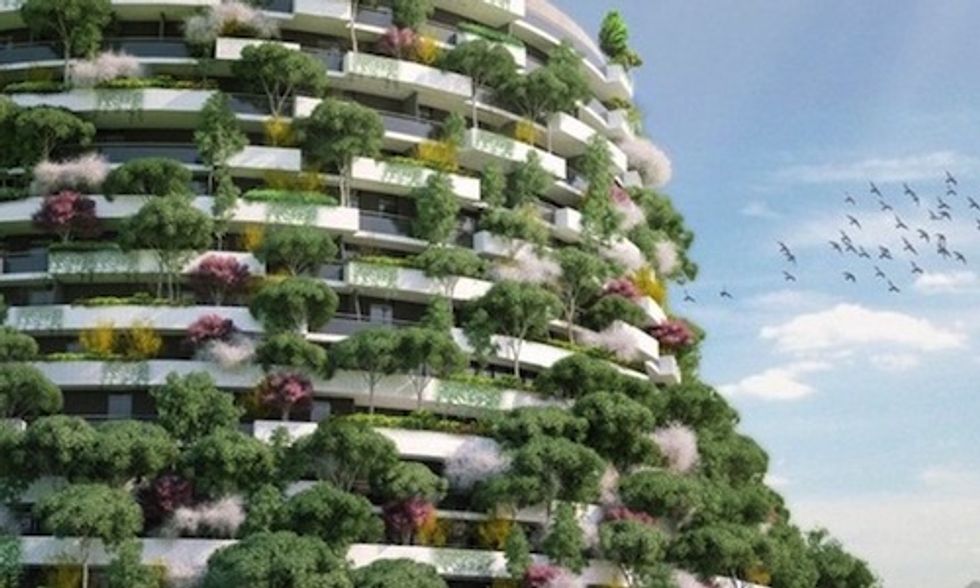 We've heard of vertical gardens but what about vertical forests? The Mountain Forest Hotel in Guizhou, China's Wanfeng Valley is a carbon-sucking, sky-high marvel created by Milan-based architect Stefano Boeri.

The Mountain Forest Hotel, located in Guizhou, China, is so green that it will improve the air surrounding it. Photo credit: Stefano Boeri Architetti China

Boeri is the visionary behind similar plant-covered structures, such as Bosco Verticale in Milan and The Tower of the Cedars in Lausanne, Switzerland that features trees and plants on every floor.

“It’s a symbol of restitution,” Boeri told TIME of the Mountain Forest Hotel that's opening fall 2017. “Buildings have to take care of nature.”

The 31,200-square-meter development was designed in collaboration with Chinese artist and interior designer Simon Ma for the Hong Kong-based Cachet Hotel Group. In addition to rooms and suites, additional hotel amenities will include two restaurants and lounges and recreation facilities such as a swimming pool, spa and a fully equipped fitness center.

The developers point out on their website that the hotel was inspired by the site's original topography and ecosystem, which is also known as the Forest of Ten Thousands Peaks.

"The design aims to restore the landscape, by reconstructing a former existing hill that was flattened years ago, in this way emulating the past and present hills," Boeri's group said.

"Symbiosis is the goal. Sustainability not only depends on energy conservation, but on a wider biodiversity. The symbiosis between man, architecture and nature is the real sustainability."

With plants and trees lining every floor, the hotel is like a reconstruction of the former hill on the site that was demolished years before. Photo credit: Stefano Boeri Architetti China

The New York Times named Guizhou as one of its 52 Places to Go in 2016. The province had been one of China’s least inaccessible regions until a $20 billion high-speed railway that opened in 2014 cut travel time from Guangzhou, the nearest major city, from 20 hours to four.

Spa Business Magazine notes that Boeri is involved with several Chinese projects, including a stock exchange building in Shanghai and a "Forest City" masterplan in Shijiazhuang, the smog-choked capital and largest city of North China's Hebei Province.

"Shijiazhuang for its part, has a sad record: it is the city with the highest rate of air pollution in China. A pall of smog and soot that rises only a few days a year," Boeri says of his concept.

"The Forest City in Shijiazhuang will be a new city for 100,000 inhabitants. A city of new generation, capable of becoming a model of sustainable growth in a large country that each year sees 14 million farmers migrating to the cities."

‘World’s Most Sustainable City’ to Run on 100% Solar