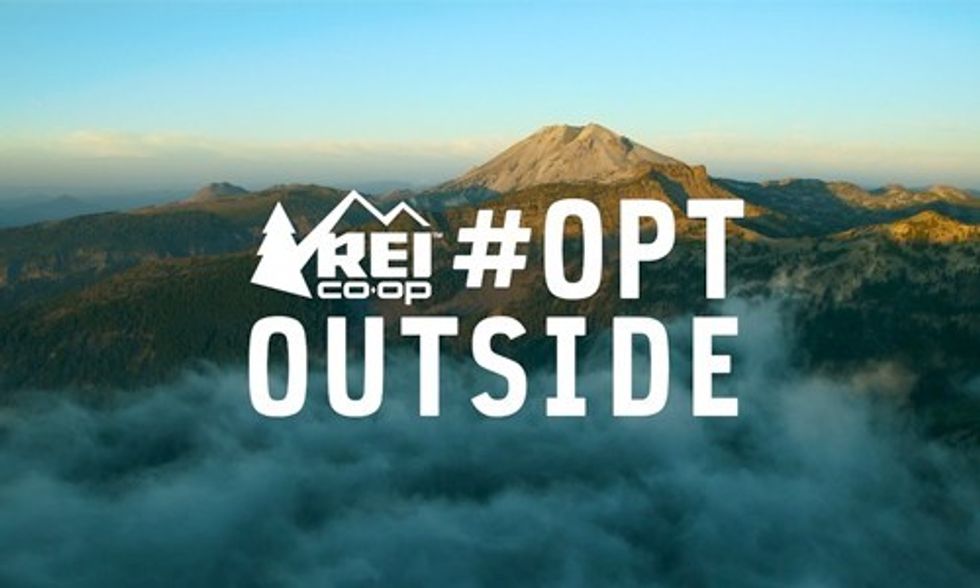 For many retailers, Black Friday is one of the most profitable days of the year, and it is no different for specialty outdoor retailer REI. As CEO Jerry Stritzke told CNN, "Black Friday has been among the company's top 10 sales days in past years."

REI's website has a countdown to Black Friday. The retailer plans to close for the day and encourage people to go outside.

But this year, they are shuttering all 143 of their retail locations, headquarters and two distribution centers and giving their 12,000 full- and part-time employees paid time off not only on Thanksgiving, but on Black Friday as well. Instead of business as usual, they are encouraging their employees and customers to do what they love most and go outside. As for online shoppers, they can still place orders, but they won't be processed until Saturday, and the site's "homepage will try to divert buyers with a 'cover screen' encouraging them to explore the outdoors instead," reports CNN.

“Black Friday is the perfect time to remind ourselves of the essential truth that life is richer, more connected and complete when you choose to spend it outside," said Stritzke. "We’re closing our doors, paying our employees to get out there and inviting America to OptOutside with us because we love great gear, but we are even more passionate about the experiences it unlocks.”

REI is encouraging Americans to join them in spending Black Friday outside. They are asking people to share their Black Friday plans on their website or on social media with the hashtag #OptOutside.

REI, founded in 1938 and headquartered near Seattle, ended 2014 with $2.2 billion dollars in sales. But it's not your typical company. It's now the nation's largest consumer co-op, with 5.5 million active members. The company is devoted to its members, who make up at least 80 percent of its sales, according to USA Today.

In a letter to his members, Stritzke invokes naturalist John Muir, who said in 1901, “thousands of tired, nerve-shaken, over-civilized people are beginning to find out that going to the mountains is going home.” I can only imagine what John Muir would have to say about people getting trampled to death at a Wal-Mart in the shopping frenzy that has become Black Friday.

“As a member-owned co-op, our definition of success goes beyond money," writes Stritzke. "We believe that a life lived outdoors is a life well lived and we aspire to be stewards of our great outdoors. We think that Black Friday has gotten out of hand and so we are choosing to invest in helping people get outside with loved ones this holiday season, over spending it in the aisles. Please join us and inspire us with your experiences. We hope to engage millions of Americans and galvanize the outdoor community to get outside.”

The move is part of a growing Anti-Black Friday movement. Last year, Patagonia encouraged customers to swap their used items for other used items or new ones, if needed. Patagonia has actually been encouraging its customers for years not to buy products they don't need.

In an email to its subscribers on Cyber Monday last year, Patagonia said:

"Cyber Monday, and the culture of consumption it reflects, puts the economy of natural systems that support all life firmly in the red. We’re now using the resources of one-and-a-half planets on our one and only planet.

"Because Patagonia wants to be in business for a good long time—and leave a world inhabitable for our kids—we want to do the opposite of every other business today. We ask you to buy less and to reflect before you spend a dime on this jacket or anything else."

Groups such as Reverend Billy and the Stop Shopping Choir have been urging Americans to turn Black Friday into "Buy Nothing Day" to fight the overconsumption that they say plagues the U.S.

You can share your Black Friday plans with REI by uploading a photo to their website or by using the hashtag #OptOutside on social media.